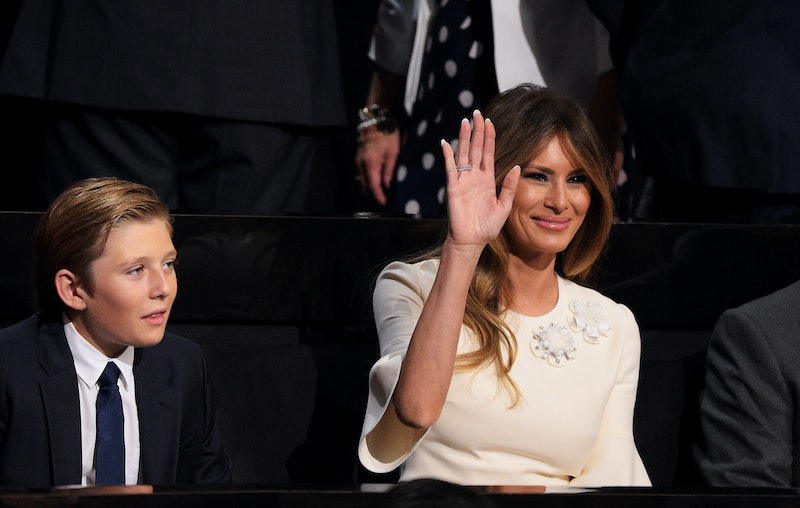 In an interview with CNN's Anderson Cooper on Monday, Melania Trump addressed the avalanche of sexual assault allegations her husband is facing (and has vehemently denied) — as well as the manner in which Donald Trump chose to respond to those allegations. During the interview, Cooper asked Melania if she thought her husband was justified in claiming that his accusers weren't attractive enough for him to hypothetically bother with. Melania implied that yes, she stands by that defense. Why? Because Donald is "raw."

"He's raw," Melania said. "He will say it as he feels it. So you know, I know he respects women. But he's defending himself because they're lies."

After multiple women — nine as of this writing — came forward to accuse Trump of sexual assault, the Republican standard-bearer had several defenses ready. Firstly, Trump and his campaign have denied every allegation thus far. Another line of defense was "she would not be my first choice," also known as the "she's too ugly for me" excuse. Trump used this defense multiple times against several of his accusers, which suggests that he's actually given some thought to this strategy and decided that, yup, insulting women's looks is the way to go.

In fact, it's a terrible strategy, both morally and, as evidenced by Trump's steady collapse in the polls, practically. And Melania's defense, of course, is just as bad.

At the risk of stating some very obvious facts, the Trumps' defense does not hold up for a number of reasons. Firstly, a woman's appearance has no bearing on whether or not she's telling the truth about having been allegedly assaulted. Secondly, Trump's excuse doesn't do anything to denounce sexual assault whatsoever. And lastly, a person who insists that a woman isn't pretty enough to bother with does not, contrary to Melania's claims, respect women.

To be fair, Melania is in a difficult position here, as spouses of presidential candidates often are. She is essentially being asked to answer for her husband's own words, but because those words are indefensible, she's in a no-win situation: Either condemn Trump's rhetoric and face the wrath of his campaign and supporters, or stand by him and end up saying something absurd, as she did today. Given that Melania isn't running for office, it's perhaps a little unfair to place such a burden on her.

On the other hand, despite all of this, she is nevertheless working to elect a dangerous candidate to the presidency. So, you know, that's a relevant fact, too.