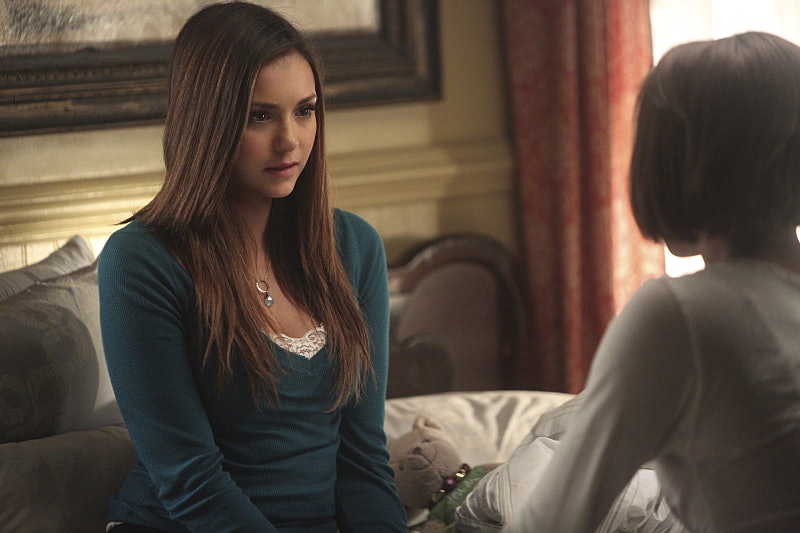 Since the major Comic Con announcement, everyone has been wondering the same thing: Will Nina Dobrev return to The Vampire Diaries' last season? It seems pretty likely that she will come back considering Vampire Diaries is ending after Season 8 and, technically, Elena Gilbert is still alive. During an interview with TV Line over the summer, executive producer Julie Plec said, "Not to put too much pressure on anything Nina Dobrev, but a promise was made, an emotional promise, that I’d like to see come to life. There has been friendship promises made and now we’ll see if we can deliver on them." We haven't heard any confirmation from Dobrev on the matter, but someone did update IMDB to say she's in some of the ending episodes. If I had to bet money on it, I would put a lot on her making one final return at the end to wrap things up.

So where exactly did we leave off with Elena Gilbert? At the end of Season 6, Kai broke out of the prison world, bringing Lily's heretics with him. As if that wasn't bad enough, he did a spell linking Elena and Bonnie together so Elena wouldn't wake up until Bonnie died. If they tried to find a loophole, it would kill them both. Nothing gave fans more pleasure than Damon chopping Kai's head off, am I right? Everyone said goodbye, and she's been kept in a box until the day Bonnie dies and she can wake up again.

But, Nina Dobrev really needs to come back for the final showdown for these reasons.

I know that Stefan and Damon are two of the main characters too, but the show was literally about Elena Gilbert and her diary. How could she not come back? The past seven seasons has literally revolved around her. They say that several times throughout the show.

Her Storyline Needs To Wrap Up

You can't just end the show with her in a box like Sleeping Beauty! If she's not coming back then they at least need to kill her off somehow. Fans will lose their mind if Elena's storyline does not resolve in any way.

Elena And Damon Need To Be Together

Dalena is the real deal and we need to end it with the two of them together and happy. Damon was so close to taking the cure. She needs to wake up, he needs to take the cure and they need to live happily ever after. I know there's a lot of wishful thinking there, but whatever.

We Need A Little Gilbert Update

So Jeremy left to hunt vampires and we literally never heard from him again apart from when he came to say bye to Elena. The only way to resolve Little Gilbert's storyline is to bring back Elena for a family reunion.

To Give Stefan The Cure

Stefan has wanted to be human forever because of that whole ripper thing. It would be great to wake Elena up so everyone can take the cute and go about their merry lives like normal, happy people. I bet Matt Donovan would like that too.

To Meet Her Nieces

Okay, so Alaric and Jo's kids aren't technically her nieces, but Alaric was a father figure to the Gilberts after their parents died, so it counts. She needs to meet them once before the show ends!

This whole show is about how awesome and kind Elena Gilbert is. She never wanted to be a vampire and then it happened. The whole plot then turned into trying to get Elena the cure and finally, after six seasons, she's human again for literally a day and then passes out for 60 odd years? No. Wake her up, it's the only way the show can have its proper ending.