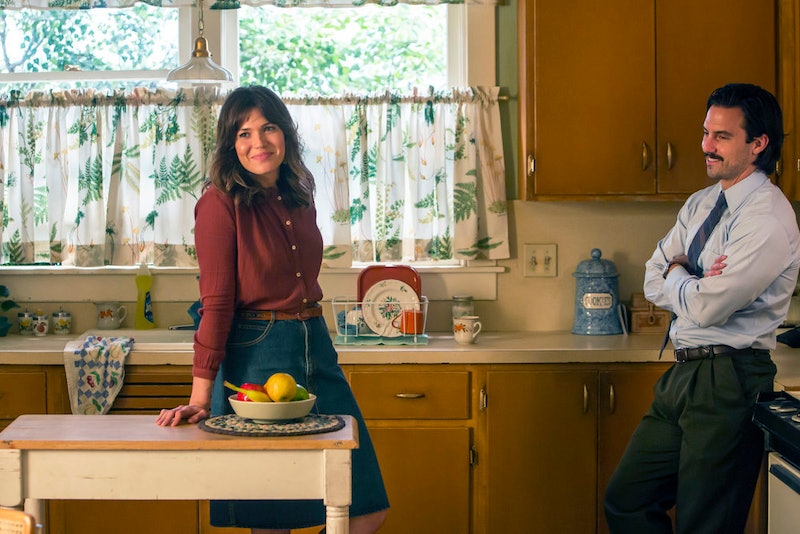 NBC's This is Us has thrown some excellent curveballs at its audience. First, the pilot had the unbelievably sweet reveal that Randall, Kate, and Kevin were Jack (Milo Ventimiglia) and Rebecca's (Mandy Moore) three kids. But then the second episode put a certain fear in Ventimiglia fans everywhere when present day Rebecca showed up at Randall's home with Jack's best friend Miguel. Speculation ran wild as fans wondered if Jack could be deceased in the present, but I think Jack and Rebecca are divorced on This is Us . There's plenty of proof that Jack is out there in the current timeline, alive, well, and waiting to make his mid-season appearance to earn back Rebecca's love.

It all started with that darn necklace. In the second episode, past Jack and Rebecca experience some marital tension, but Jack mends the wound and gives her a lovely crescent moon necklace that she promises never to take off. And present-day Rebecca is still wearing the necklace, even as visits her grandchildren with their "Grandpa Miguel." Of course, this launched a theory that Jack could possibly be dead and this is Rebecca's way of remembering him as she's married to his bestie who was clearly crushing on her in the past (remember when he called her "the gold standard of wives" to Jack?). I wouldn't jump to that conclusion just yet, though.

Here's proof that Jack and Rebecca could be divorced in the present — and there's even a chance they could reconcile (sorry, Miguel).

This is Us has made it clear that Jack and Rebecca don't always see eye-to-eye — and that's totally OK. But perhaps there came a time where they had an argument that they just couldn't solve and it led to divorce.

Whenever They Fight, They Eventually Make Up

Any time the audience has seen tension between Jack and Rebecca, they've always found a way to mend fences by the end of the episode. And that could be totally intentional and foreshadowing. This is Us is a multilayered TV series with lots of meticulous details seemingly already laid out, and just like the fact that they've encountered some pretty big roadblocks could be a hint that will eventually get divorced, their tendency to forgive each other suggests that one of those upcoming storylines is their reunion.

There's No Evidence That Rebecca & Miguel Are Married

Aside from Randall's children vaguely calling Miguel "grandpa," viewers haven't been given any concrete reason to believe that he and Rebecca are married while Jack is totally out of the picture. Maybe they're just dating. Perhaps they decided to be companions. Maybe the kids have become so close with Miguel because of his friendship with Jack that they see him as a grandfather figure too. I remain skeptical until I either see a ring or Rebecca refers to Miguel as her husband.

The Family Is Split Between The East & West Coast

It took me a bit to figure this out, but Randall lives on the East Coast — seemingly in a suburb of New York City — while Kate and Kevin appear to be in or near Los Angeles. Since Rebecca and Miguel casually stopped by Randall's house, they probably live somewhere near him, and we know that Kevin is now heading east as well. With that much distance separating the family, it makes sense that they aren't always together and could explain why he haven't seen present-day Jack. Maybe he moved to LA at some point after the divorce to be near Kate and Kevin, or vice versa. We may not have seen him yet because he lives across the country from Randall and Rebecca, but will eventually interact with Kate.

Jack Knows How To Make The Best Of Tough Situations

In the pilot episode, the doctor gave Jack that now iconic speech about how there's no sour lemon you can't make lemonade out of, which inspired him to adopt Randall. According to Kate and Kevin, it's a saying that Jack has taken through his life, so what if after the divorce, he went out on a self-improvement journey and will return soon, better than ever and ready to reconcile with Rebecca?

This one could go two different ways. Sure, Randall could have sought out his biological father, William, after the death of Jack, but I think their newfound relationship would be different if that were the case. Randall's apprehension at bonding with William may stem from a fear of hurting Jack's feelings or not being sure how to balance having both of his fathers in his life.

The other option depends on Jack and Randall's own relationship, which we haven't seen explored or discussed beyond Randall's early childhood. If they didn't get along later on or Randall blames Jack for the divorce, it could be another reason why he sought out his biological father. And that previous hurt from Jack could have also made it more difficult for Randall to accept and trust that new father figure.

There are clues for both side, but I don't think we should start mourning present-day Jack just yet. I'm sure This is Us has plenty more surprises in store.

More like this
Clayton & Susie Broke Up, Citing "A Significant Amount Of Pain" After 'The Bachelor'
By Jordyn Tilchen
The 'Skins' Cast Shared The Reunion We’ve Been Waiting For
By Sophie McEvoy
Molly-Mae Hague & Tommy Fury Celebrate Pregnancy Reveal In The Sweetest Way
By Sophie McEvoy and Sam Ramsden
Kendall Jenner Thinks Tristan Thompson "Wanted To Trap" Khloé With Another Baby
By Jake Viswanath
Get Even More From Bustle — Sign Up For The Newsletter