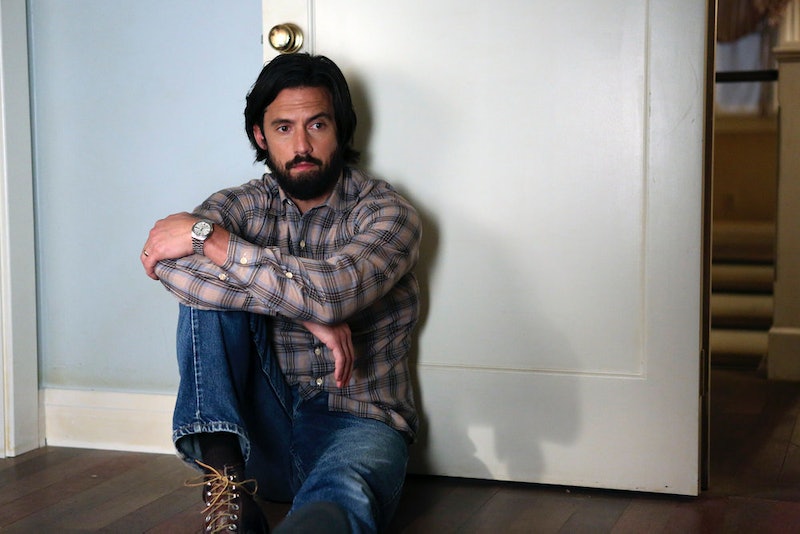 When Rebecca showed up at Randall's home in the final moments of the second episode of This Is Us, fans were shocked to see that Jack wasn't standing alongside her. Since Rebecca appears to be married to Miguel in the present day, does that mean Jack is dead on This Is Us? It's truly a catch-22 since Jack not being with Rebecca either means this beloved couple has divorced or that Milo Ventimiglia's character is dead. Both of these scenarios are far from ideal, but it's almost easier to handle that Jack has passed away versus him and Mandy Moore's character being estranged. Although This Is Us probably won't provide a solid answer for many more episodes, I launched a thorough investigation to discover if Jack is dead on This Is Us and the results aren't particularly comforting.

An overarching theme of This Is Us is certainly issues with parents — specifically fathers. From Randall with his biological dad to Kevin's fictional character the Manny, the impact a father can have on his children is an integral part of the series. Although Jack was shown not being an A-plus father in Episode 2, "The Big Three," the way his children speak of him in the current timeline shows that he fulfilled the prediction Dr. Katowsky made in the pilot: "They're excited to meet their father. I think maybe they got a good one." While this focus on what it means to be a good father makes me think that Jack is dead since it adds to the devastation factor, it's not a very clear indicator. But don't worry, there are other things that point to the fate of Ventimiglia's character.

Looking at the evidence from the series' first two episodes and one potential massive spoiler from one of the series' stars, here are the reasons why it looks like Jack is most likely dead in the present day on This Is Us.

As Jack and Rebecca celebrated their annual birthday tradition in the very first scene of the series, Sufjan Steven's song "Death with Dignity" played in the background. While their scene was interspersed with clips of Kate in the present day, there's still a troubling correlation to seeing Jack on screen while Stevens sings the lyrics, "What is that song you sing for the dead?" You could say it's just a good song — or even a foreshadowing to Rebecca losing one of the triplets — but perhaps it's an unsettling and subtle clue about Jack's future.

Randall Searched For His Biological Dad

The series premiere also centered around Randall seeking out his biological father on his 36th birthday. When Randall's wife, Beth, asked him why he had chosen to find his dad now, Randall said he didn't know. A death in the family often makes people reach out for answers, so could this search for his biological dad subconsciously be a way of dealing with the death of the dad who raised him? Both Beth and Randall would be aware if that was the case, but the series wants to keep viewers in suspense without spelling it out, so even if the characters won't admit it, Randall looking for William because Jack died seems to be a related cause and effect to me.

The Use Of The Past Tense

The Big Three have spoken so fondly about their dad that it gives the impression that Jack is dead. Nothing has been said to confirm it, but the characters using the past tense to describe Jack is a little telling. Randall's biological dad, William, said, "Your dad must've been very proud of you." Why didn't he say "must be"? Still, William is new the scene, so a character who is a little more reliable when it comes to knowing Jack's fate is Kate. She said to Kevin, "Do you remember what dad used to say when something crappy would happen to us?" She could have said, "Remember what dad says when something crappy happens?" She even doubled down on the past tense with, "C'mon, Kev. You remember. What did he say, about the lemons?" This could just indicate that the lemons talk was something he said when Randall, Kate, and Kevin were children, but maybe it means he's no longer around to give his kids pep talks.

When Randall's daughter proclaimed, "Grandma and Grandpa are here!" Moore with her (pretty decent!) aging makeup was at the door. Although she was disappointingly accompanied by Miguel instead of Jack, she was wearing the crescent moon necklace that Jack had given her after a big fight in the 1980s. Rebecca had promised she would never take it off when she originally received the gift, but if Jack were alive in the present day and they were divorced, it would be totally acceptable that Rebecca had chosen to stop wearing it. The fact that she is still wearing the necklace nearly three decades later means to me that Rebecca must think fondly of Jack (regardless of their marital status), which is a pretty good sign that he has died. After all, would Miguel be cool with her wearing a necklace that was a romantic token from her ex-husband otherwise?

Here's the biggest clue of the bunch and the potential This Is Us spoiler. The actor who plays Kevin, Justin Hartley, may have unintentionally spoiled that Jack is dead during a Facebook Live interview with Entertainment Tonight . In the above video, around 3:09, Hartley said, "It was announced that someone had died ... in the first episode." Although it's hard to hear, interviewer Leanne Aguilera can be heard sadly saying, "Milo" in between his words — as in Ventimiglia's character. Hartley responded, "Yeah" and then said, "As to when he dies is up for grabs as far as the audience is concerned." Uh, is this real life?! If so, Hartley seems to have given away a huge secret about the series and I'm pretty sure he wasn't supposed to.

Although This Is Us creator Dan Fogelman and Moore and Ventimiglia have been cryptic in interviews to Entertainment Weekly about the show's twist, Hartley may have put an end to all speculation. However, even if it's true that Jack is really dead, how the show will get to his death is guaranteed to be worth watching — and make for many tearful moments.