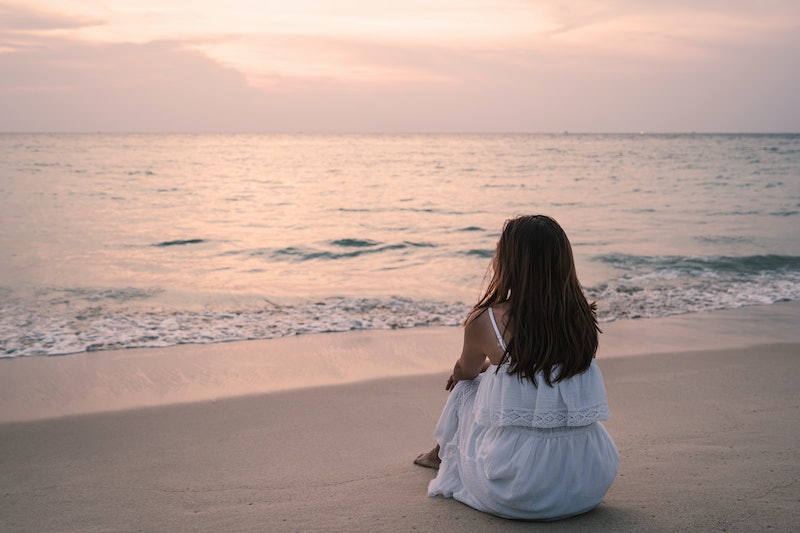 Americans love the pursuit of happiness — just look at the Declaration of Independence; we’ve been on the hunt since day one, and our commitment shows no signs of wavering. Yet, are our hours (not to mention dollars) spent on mindfulness books, meditation courses, gratitude journals, and so on even working?

British journalist Ruth Whippman breaks it down in her new book, America the Anxious: How Our Pursuit of Happiness Is Creating a Nation of Nervous Wrecks. Although she had “never set out to write a book about happiness,” as she tells Bustle in an interview, the topic caught her attention after she relocated to the United States. In California, she quickly discovered that happiness was a ubiquitous issue; it came up everywhere, from her gynecological appointments to her mother-son trips to the playground.

Whippman started doing research and reached a depressing conclusion: the more you try to force happiness, the less likely you seem to be to find it. When she penned a 2012 New York Times piece on the subject, the reaction showed she had struck a chord. Not only did her article go viral, Whippman found herself being encouraged to write a book on the topic.

Armed with 10 years’ experience making documentaries for the BBC, Whippman kept digging. On top of her numbers and statistics, she sought out stories, people, and places that would complement them. Her goal was to illustrate how the hunt for happiness “affects every area of life,” including religion, social media, parenting, and the workplace, she says.

Her documentary background certainly helped. “The basic storytelling techniques are very similar in terms of writing a book like this, which is driven by the people and the story, and what happens in the scenes,” she says.

These techniques made for vivid and often hilarious scenes and situations, from her visit to a bar in what she describes as a “kind of utopian happiness community” in downtown Las Vegas to the bridal shower for a 21-year-old Mormon woman in Utah. At every turn, Whippman clearly conveys how complicated happiness is to unpack and how many factors work against us.

Comparing ourselves to others, for example, can be seriously detrimental — but there’s a big problem: It has only gotten easier to do.

“Every human being naturally compares themselves to other people. I don’t think we can get around that, and I think that’s part of what makes us human and what makes communities function,” Whippman tells Bustle. “But I think we’re entering an era where we are comparing ourselves with others way more than we ever have in the past, and that’s because of social media — and it’s also about the way we use social media.”

Just think about any #nofilter selfies that secretly took you 20 tries to get just right, or the vacation photos that never made it onto Facebook because you didn’t look like you were having enough fun. As much we might not want to admit it, most of us are showcasing only the best parts of our lives on social media and hiding away the less-than-perfect ones. Yet, this behavior can be as damaging as it is common.

“There’s quite a lot of research that shows that social media really encourages this social comparison phenomenon, and that in turn makes us anxious and sad,” says Whippman.

We’re entering an era where we are comparing ourselves with others way more than we ever have in the past, and that’s because of social media — and it’s also about the way we use social media.

Not surprisingly, though, change is hard, even for Whippman. “You’d think that now I would be so wise to it that a) I would be more honest myself on social media, and b) I would be not worrying about what everyone else posted,” she says, “but for some reason, there’s something about that Facebook world that just sucks you in, and even if you know something in theory, you can’t help experiencing it in the same way.”

It is definitely is challenging to not worry about what we should be doing differently or better, even when it comes to happiness. In fact, that problem may be especially troublesome for women; after all, we’re the biggest consumers of self-help products by a landslide.

“This is a very, very female-dominated industry,” says Whippman. “Women buy 80 percent of these books and apps and all self-help products across the board.”

There are pros and cons to this, she points out: While women may have a “natural desire for self-improvement,” which can be good, there’s also a “kind of self-flagellation” element that can be harmful. Just as we women often think we need to be dieting to be “better,” many of us worry about our happiness — or lack thereof.

“I think for women especially, it’s this idea that you can’t be happy with who you are. You need to sort of make yourself into a better person,” says Whippman, who also notes how it’s embedded in our culture and the way we talk about women. “Maybe we should be working more toward self-acceptance of who we are right now, rather than trying so hard to change.”

Perhaps we should all work on it, but instead, many of us are continuing our pursuit with the self-help and positive psychology industries. They’re more than happy to offer us material on how to become happier, but as America the Anxious explains, some of it may actually be doing more harm than good.

When it comes to self-help, “anyone can sell anything to anyone for any price and say that it’s going to transform your life,” says Whippman. “There’s absolutely no requirement that they provide evidence that the thing works.”

Meanwhile, positive psychology, which Whippman describes as “the academic study of happiness,” isn’t perfect, either.

“I think [the field] has suffered from some really poor science,” she says. “And there’s a problem whereby the same people doing the research … are the same people who are making money off the books and apps and coaching courses and everything that they’re selling. They’re very incentivized to make their research look better and stronger than it is.”

It turns out that one message that everyone should know, though, is pretty simple: Your support system is essential to your happiness.

“When you look at the research, and when you talk to all these people as well, this point is so consistent, and it cuts across class and race and gender and age and everything,” says Whippman. “The single most important thing for our happiness is our social relationships, and the depth and quality of those relationships.”

Doesn’t spending time with loved ones sound like a lot more fun than worrying about whether or not we’re happy enough anyway?

More like this
Wimbledon Alters All-White Kit Rule Amid Candid Period Discussions
By Catharina Cheung and Rachel Mantock
People Are Flocking To The Hive Social App Following Twitter’s Changes
By Kaitlyn Wylde and Alexis Morillo
How To Stream 'She Said' In The UK
By Maxine Harrison
Where Is John Leonard Now After Suing Pepsi For A Harrier Jet?
By Brad Witter
Get Even More From Bustle — Sign Up For The Newsletter