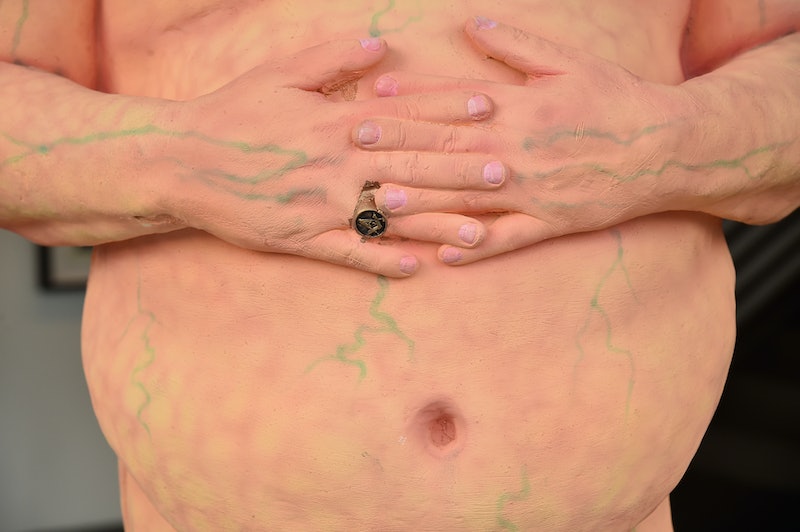 A grotesque statue of a nude Hillary Clinton was erected in downtown Manhattan on Oct. 18, crudely depicting the Democratic nominee with hoofed feet and what appears to be a Wall Street banker resting his head on her bare breasts. The statue, which remained outside the Bowling Green station for three hours during morning rush hour, was eventually toppled and removed after a heated debate ensued between the artist and an angry passerby. The naked statue of Clinton draws obvious comparison to the ones of Trump which appeared across the country this summer, but there's one clear distinction. With his constant praise of his own body and shaming of others', Trump made his body a campaign issue. Clinton, on the other hand, has not, rendering the "art" less effective and, frankly, cheap.

Trump's obsession with his own body and others' created the cultural space for his naked statues — and despite fair criticism against them (let alone the fact that they were just unsightly), that space still stands. Time and time again, voters have seen Trump criticize others' bodies, from calling former Miss Universe Alicia Machado "Miss Piggy" for gaining weight to saying Rosie O'Donnell was a "fat pig."

He has maintained a running commentary on women's bodies for far longer than his presidential campaign. (It's also worth nothing that while the naked statues of Trump were installed legally, the one of Clinton was not. The artist did not have a permit for his demonstration, forcing officers with the counter-terrorism unit to remove it.)

Trump has also touted his own apparent physical prowess as a measure of his presidential qualification. He assured voters that "there’s no problem, I guarantee it" in reference to his penis size at a GOP primary debate.

In this way, the naked statue of Trump was warranted. He has largely run his campaign on the premise that he has "a great body, the best body," and that his physical prowess, towering over others at 6'2'' or taller (depending on the day), qualifies him to be president. His constant judging of women's bodies likewise makes him a candidate to have that judgement served right back at him. Clinton's statue doesn't hold that same cultural weight as Trump's did.

Blatantly, Trump left himself naked — both figuratively and literally — to criticism of his body. Trump himself made it a cultural talking point, and those statues lay that talking point bare. Clinton has never made her body or others' bodies a focus of her campaign, and these naked statues are a cheap shot at the election.