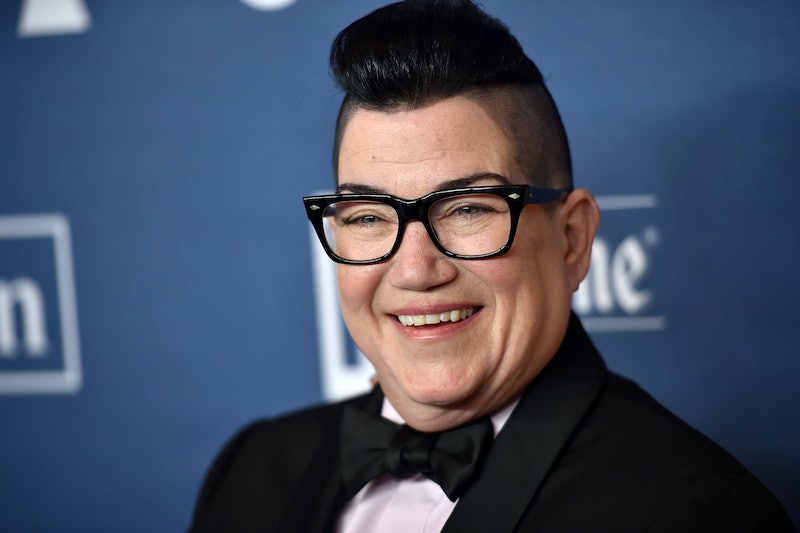 Now that the 2016 presidential election is looming closer and closer, conversations about it are becoming even more heated. And just like your distant family members who are posting embarrassing election memes on Facebook, celebrities are starting to get more vocal about the issues they care about, and often times, it's about stopping Donald Trump from taking office. During a Hillary Clinton rally on Monday night in New York, Orange Is The New Black's Lea DeLaria lashed out at Trump supporters who were protesting Clinton big time. TMZ caught the whole thing on video, and if you thought DeLaria was outspoken about the things that are important to her before, this instance might take the cake.

In the video, DeLaria leads a crowd largely made up of Clinton supporters in chanting "f*ck Trump!" before a Trump fan begins taking photos of her while flashing her middle finger. That's when DeLaria zeroes in on that woman in particular, shouting insults at her about her hair. At one point, the OITNB star even jokes that the woman is a lesbian because of the clothes she's wearing and adds, "You might want to think about voting for Hillary." The scene ends up getting pretty chaotic, and eventually, DeLaria ends up walking away to pose for photos instead.

Check out the definitely NSFW video below:

DeLaria is known for being blunt, especially after the time she took down an anti-gay preacher on the subway in 2014. But even if you agree with what she's saying here, it's still a lot to take in. After the controversial and often downright dangerously sexist remarks Trump has made over the past few weeks (and for most of his campaign before that), DeLaria certainly isn't the first celebrity to use her fame to speak out against him — but no other famous faces have come at his supporters so directly.

But even so, insulting the hygiene of those who are pro-Trump may not be the best way for her to get her message across. Trump may be incredibly disrespectful, but fighting back with even more disrespect isn't the way to break that cycle. I hope DeLaria never changes how outspoken she is, but maybe there's a more tactful way to go about it? With weeks left to go before voting day, there's definitely plenty of opportunity for that.