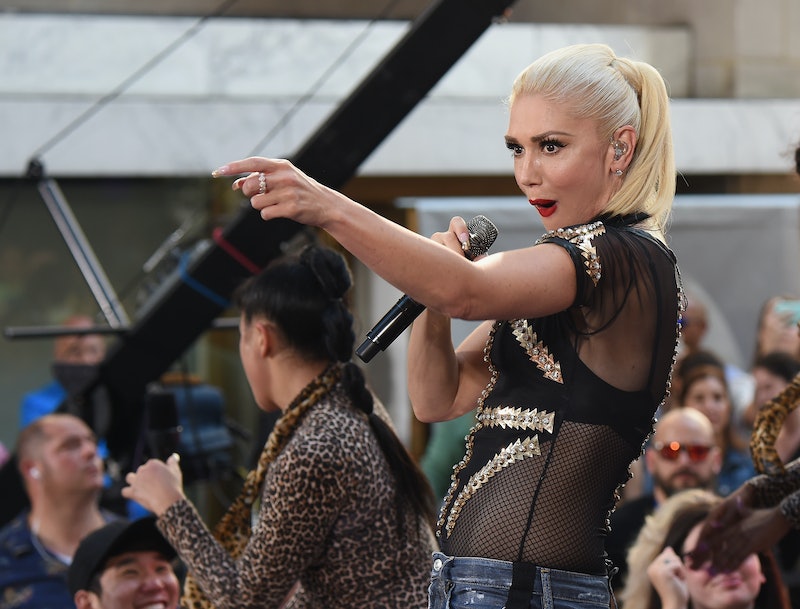 During this season of The Voice, two new faces — Miley Cyrus and Alicia Keys — joined longtime red chair sitters, Blake Shelton and Adam Levine. But this season's core four will soon endure another mixup. It was announced that in leu of Cyrus, Gwen Stefani will be back on The Voice. This isn't her first stint on the coaching panel, as the singer was on Season 7 and 9 of the show (and served as an advisor during Season 10). As for when her return is happening, Stefani will be back on The Voice for Season 12, which will air sometime in February of 2017.

“We can’t wait to experience the unique chemistry and energy Gwen, Alicia, Blake and Adam will bring to Season 12,” Paul Telegdy, President of Alternative and Reality Group, NBC Entertainment said in a statement. “With Miley returning for Season 13, we’re truly ecstatic about the unmatched musical know-how and talent coming together in our coming seasons.”

Oh, yeah, that's right. As it turns out, Miley Cyrus will only be gone for Season 12, but back again for Season 13. At this point, no other judges have been confirmed for Season 13, though we can pretty much count on Levine and Shelton to return.

Levine, and Shelton have been with the show since Season 1, and have been through a circling door of judges. Cee Lo Green, Shakira, Usher, Pharrell, and Christina Aguilera have all come and gone over the course of The Voice's 11 seasons. While Cyrus was the youngest judge so far, she was (as always) entertaining to watch, and offered up some of the season's best moments.

Say what you will about Cyrus, but, when it comes to vocals, she's got the technical proficiency for this gig. I'm personally glad to hear that she'll be back and able to put that to good use again.

Those who tuned into Season 11 to see Cyrus might wait Season 12 out. However, fans of Stefani and Shelton's relationship will surely be giddy at the thought of seeing this love pairing together again. After splitting from their exes, she and Shelton began dating, and, in the fall of 2015 during the show's ninth season, it was clear that these two had sparks. Now that their relationship seems more serious than it was back in 2015, things will probably play out differently.

And by that I mean that things will probably play out in the form of a total lovefest. A welcomed lovefest.

We've got months to go until any of this happens, but, in the meantime, catch up on the currently-airing Season 11 with Cyrus while you still can.