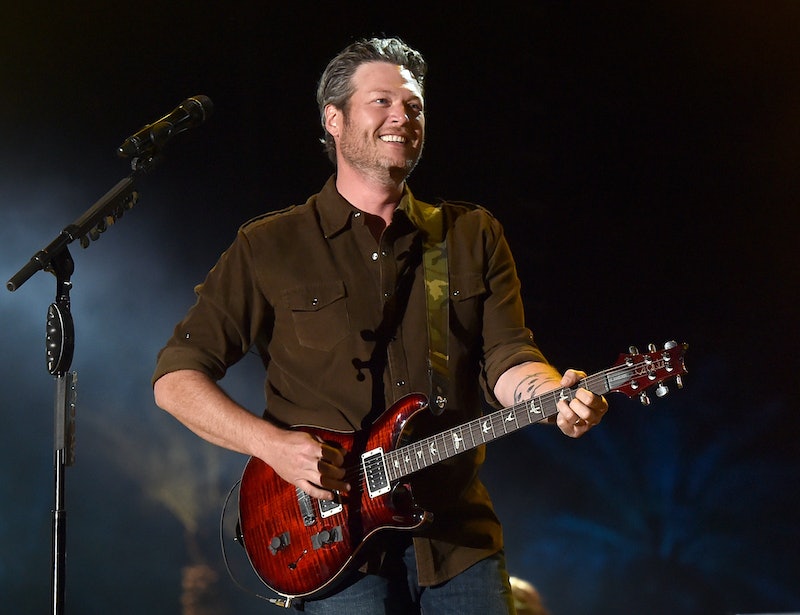 People have always loved shipping their favorite television or film stars into imaginary couples, because it's fun when two people you love get together, right? That certainly was the case with The Voice judges Blake Shelton and Gwen Stefani, who became the subject of romance rumors when they each announced divorces from their significant others. It didn't take long before Stefani's rep confirmed the relationship with Shelton, and while I know that they've been friendly on the show and have great chemistry, did Gwen Stefani and Blake Shelton first meet on The Voice ? Or were they friends before?

When Stefani's rep confirmed the budding romance, they said, "Gwen and Blake are longtime friends who have very recently started dating." At first, I was a little thrown back at the words "longtime friends" because I assumed that they had just met and, to me, "longtime" means like 10 years. But I guess if you think about it, Stefani joined the cast of The Voice in April 2014, giving them plenty of (Hollywood) time to create a platonic friendship, before any of their own relationships ended. In fact, it really does seem that Stefani and Shelton first met on the set of The Voice, and became friendly soon after.

Back in 2014, NBC announced that Stefani was going to join The Voice cast. In a behind-the-scenes video for the show, Shelton said, "I absolutely did not see this coming, the level of brilliance Gwen and Pharrell [Williams] brought into the game... Gwen Stefani is Gwen Stefani, she is just an icon.” Aww, well it seems like the adoration happened right from the start.

Their friendship seemed to quickly blossom and they appeared on The Tonight Show with Jimmy Fallon to compete in a lip sync battle in September 2014. Around this time, they also seemed to be getting closer on The Voice, and Stefani shared her first photo with Shelton while filming, captioned "Love him."

Fast forward to this summer when both Shelton and Stefani announced their divorces from their respective partners and rumors began swirling that their on screen flirting was becoming much more serious. With all this speculation coming about, I definitely began wondering how intense their relationship could have gotten in such a short amount of time.

As it turns out, The Voice was actually the first time Stefani and Shelton had ever met. The No Doubt singer appeared on The Ellen Degeneres Show in November and didn't lie about not being a big country music fan. "I didn’t even know who he was before I was on the show... I didn't. I hadn’t. I’m an OC girl. Like, what would I know?" she said.

Yep, they definitely weren't buddies before The Voice, but it seems like something has really sparked between the pair. It sounds like they are both having fun and I think they both deserve it at this point in their lives. Party on!