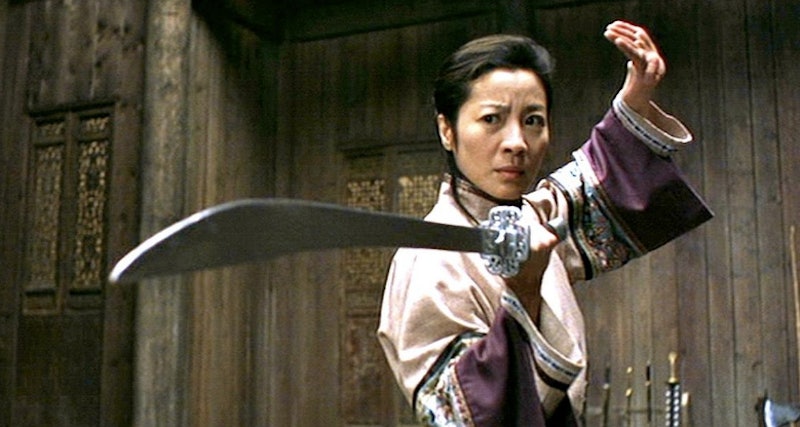 I've always thought Michelle Yeoh was a badass. Whenever I came across a picture of her on a red carpet or heard about her taking on a new role, I would be reminded of how cool she is, even though if you had asked me why I wouldn't have been able to fully explain it. While she was a huge star of action movies in Asia, I had only ever seen her in Crouching Tiger, Hidden Dragon and Memoirs of a Geisha, both movies that I'd watched in theaters years ago. Still, her coolness always stuck with me, and after viewing Crouching Tiger for again for it's re-release, nearly 16 years later, I understand why.

"This movie has magic," director Ang Lee said at a screening in New York, held in honor of the film's re-release in 4K Ultra HD and on Blu-ray. Lee spoke about how in the film he combined many different elements — things he knew from his childhood and different types of cinema. "It seemed to bring innocence to the world somehow," he added of the choice to have the characters fly. "I feel I was blessed to do this movie."

For those who don't remember, or who haven't blessed enough to see the film, Shu Lien (Yeoh), a warrior, is asked by her friend (who is secretly in love with her and she with him) to take his Green Destiny sword to their friend Sir Te, who will be its new owner. The sword is then stolen by Jen (Zhang Ziyi), the governor's daughter who has secretly trained in Wudang fighting herself. This leads to multiple fights in an attempt to get the sword back, including a couple solely between Shu Lien and Jen, including one in which Jen kicks the asses of approximately two dozen men in what could be best described as a literal interpretation of the phrase "toppling the patriarchy."

Upon seeing the movie again, I was struck by how much of a rarity Crouching Tiger is. When there are still so many new movies that don't even pass the Bechdel test, watching a film that not only includes numerous scenes that feature women without men, but also several action scenes between female characters is exciting. When I first saw the movie when I was 12 years old, I'm sure I didn't think consciously about how rare and awesome it was to watch two female leads who were so complex (and who just happened to be sword fighting, martial arts masters). But seeing it now, at a time when feminism is on my mind (working for this site helps, as does the fact that one of our presidential nominees is a woman while the other is a misogynist), seeing Shu Lien and Jen on screen seems all the more important.

Crouching Tiger being restored in 4K is great news because, hopefully, it will get people talking about the film again and get a whole new generation of people watching it. After seeing it for the second time, age 12 might have been a little young to be watching a film in which someone's head is severed with a deer horn knife, but I think the effect the movie had on me was worth it. I came out of the theater knowing that strong women like Shu Lien were to be looked up to, and I'm glad my mom took me to see the film, albeit a little early in life. When and if I ever have a kid (I assume that by that time, it'll be restored to be watched via some sort of immersive virtual reality system), I will be sure to share it with my future son or daughter. For any young teen, this film is sure to make a huge impact on the way they see the world.