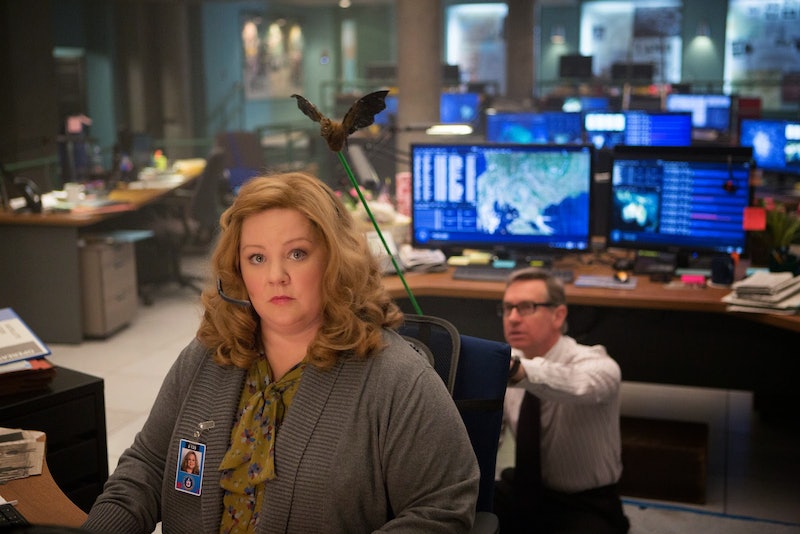 With the release of the upcoming Melissa McCarthy action comedy Spy , more attention is (rightfully) being given to a specific type of film the action genre (sadly) doesn't see all that often: Female-centric action movies. This is great, because if there's any type of film that deserves more attention, it's one that's run by females — especially in genres that are usually completely male-dominated. So, with this newfound, took-everyone-long-enough interest (and before anyone starts trying to act surprised that women can helm their own action franchises — and massively successful ones, at that) in the genre, I thought it best to look back and remember some of the best action movies ever made that also starred badass ladies.

There's also been a lot of discussion lately about the dearth of female stars in action movies, particularly surrounding the recent announcement that we won't be getting a Black Widow movie from the Marvel Cinematic Universe. Seemingly, the logic behind the decision to ax a Black Widow-centric film is the alleged box office failure of past female superhero movies (Jennifer Garner's Elektra and Halle Berry's Catwoman are generally the go-to citations for precedent for this silly argument). While it's true that those films fared particularly poorly at the box office, the idea that no female-driven action/superhero movie has ever succeeded is ill-informed, at best.

Here are seven of the best lady-centric action movies ever to prove it. Some are comedies, some are thrillers, and all of them prove that women kicking ass in movies is the rule — not the exception.

This movie has a few dudes and isn't always remembered as being a truly female-driven action film. In reality, however, there's at least one kickass female in every single fight duet, and she's usually the one who wins. Also, lest we forget: Michelle Yeoh and Ziyi Zhang are the film's true leads, and they're badass ones at that.

Why are we not calling Uma Thurman's character in this movie a superhero? She can literally run up walls, wield a ninja sword with perfection, and use her mind to will herself back to physical health after waking up from a coma. Let's see Tony Stark try any of that without his suit.

Sarah Connor kicks all the butt, ever.

Who wins in a fight between Sigourney Weaver and all the aliens? Audiences everywhere, that's who!

In short, this film is an absurdly entertaining piece of nonsense, and here's why: Once upon a time, in a far away land known as 1995, people knew very little about this weird new thing called the Internet. This meant that a lot of movies were made about technology that weren't even remotely accurate, without anyone batting an eye. Case-in-point: the unbelievably outdated The Net, in which Sandra Bullock plays an "Internet hacker" whose identity is stolen by an "Internet terrorist." It makes no sense, and it's amazing.

Like Elizabeth Shue, I also spent most of my teenage years dancing around in spandex on my bed.

It's been 20 years since this movie sadly bombed at the box office and "tanked" Lori Petty's career. Enough is enough, I say! It's high time for all of us — as a society — to apologize for ignoring this gen-X alt masterpiece when it first appeared in theaters. This movie should have EGOT-ed! On behalf of America: I'm so sorry, Lori Petty. You deserved better.