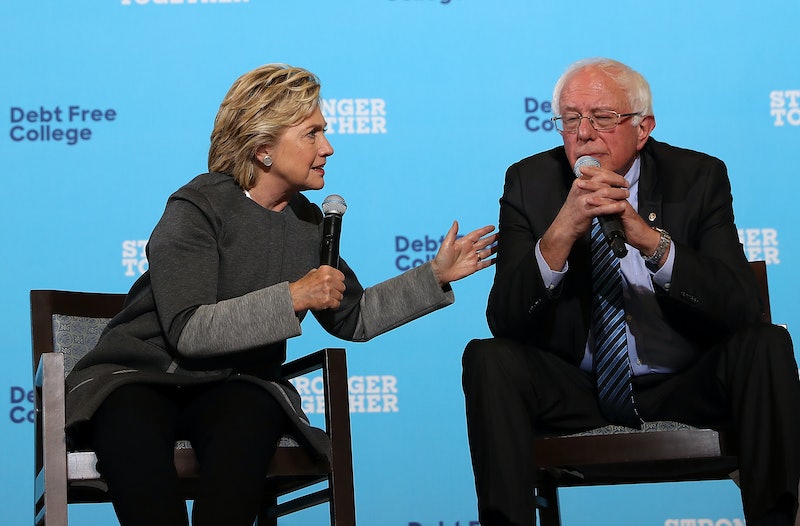 After a grueling and increasingly bizarre election cycle, the final debate between Hillary Clinton and Donald Trump is finally happening on Oct. 19. The GOP saw 16 other primary candidates come and go (many of whom are looking better and better when compared to their eventual nominee), but Clinton only faced off against one long-term challenger: Vermont Senator Bernie Sanders. After a contentious primary, which eventually saw Sanders endorse Clinton (albeit perhaps reluctantly), it's worth asking if Sanders will be at the final debate to cheer on the Democratic nominee.

So far, Sanders hasn't made any mention on social media of attending the third and final debate at at the University of Nevada in Las Vegas. Rather, it's been confirmed that he will make a campaign stop on behalf of Clinton in Reno, Nevada in the early morning, hoping to inform voters on the distinction between the Democratic nominee and Trump's economic plan. Likewise, it's reported that he will discuss the importance of defeating Trump, a talking point he's made popular in his stumps for Clinton among fans who may be disillusioned with the Democratic candidate. It's plausible, though, that Sanders could make the seven-hour trip between Reno and Las Vegas before the debate begins at 6 p.m. PT.

It's likely we will see Sanders take aim at Trump again for this final debate. The #DebateWithBernie hashtag surged in popularity during the first presidential debate, when Sanders offered his commentary on Trump in real-time.

Sanders offered up some of these burns to his millions of followers during the #DebateWithBernie: "I don't know if it's a world record but Donald Trump has been sued more than 3,500 times over the past 30 years." When the candidates discussed the birther movement, Sanders had this to say: "How dare Trump express concerns about African Americans when his birther efforts attempted to delegitimize POTUS What a hypocrite!"

So regardless of whether the former candidate is there in person, viewers will likely get plenty of Sanders' commentary on the debate.