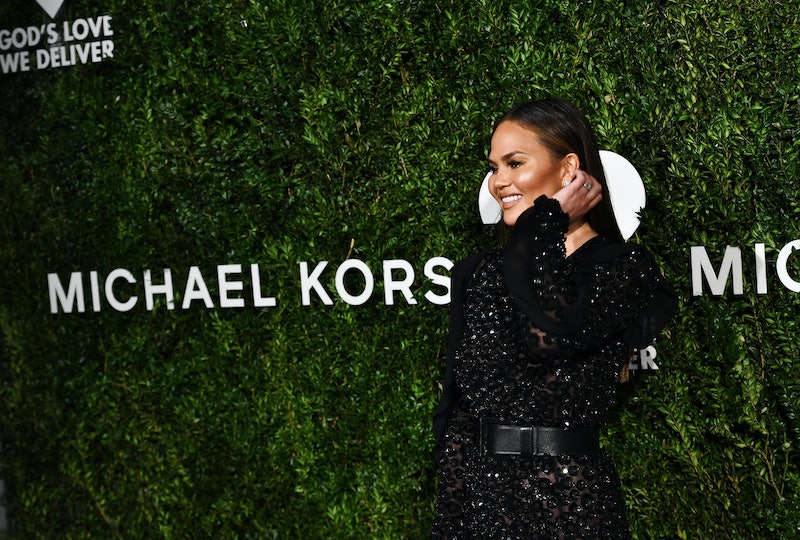 During this divisive election, it's almost impossible to keep quiet when confronting the scandals and events that turn up each day. Whether it's Donald Trump saying something offensive to one or multiple groups of people, or Hillary Clinton's past being brought up by leaked emails, voters seem less enticed by the political candidates than in previous years. Not one to keep quiet, Chrissy Teigen revealed what she thinks about Hillary Clinton at the Forbes Under 30 Summit in Boston on Oct. 18.

Teigen talked about how she's noticed that voters aren't as excited about this election as they were in 2008 when Barack Obama was elected, even though she thinks Clinton is a great candidate. "It's heartbreaking because Hillary's so wonderful and so, so passionate," she said. "And she's been doing this for so long, she has so much experience." As an active social media user, Teigen has used Twitter to call out Trump and has stood with Clinton for some time.

Teigen told Under 30 Summit guests what is at stake in this election, especially with the choice of Trump as a candidate. "This stuff is really important, especially this year," she said. "It's actually a really, really dangerous time right now. [Husband John Legend] and I made it our mission this year to really make people see how psychotic Donald Trump is."

As for the lack of enthusiasm, she recalled when she was younger and was first able to vote living in California for Arnold Schwarzenegger for governor and how all her friends were so excited to participate and vote for "The Governator." But now, she notices voters aren't as eager. She suggested it may be because people get excited about change, which was something that Bernie Sanders offered to his supporters. Because Clinton is seen to some as another Obama administration, it's hard to get excited about someone who offers to meet expectations rather than flip them.

"You really want to get people excited to vote and you want them to feel like there's hope and change all of the time," she said. "But honestly if you look at the numbers these past eight years [President Obama] has been so fantastic, so what kind of hope and change do you want from that? It was before, when we had Bush. That was hope, that was change. And now it's not an as exciting year."

The model and social media star recently made her Twitter account private, partly due to the hatred and negativity that can so easily spread on the platform. She told the crowd in Boston, "Once Hillary wins, I'll open it back up." Let's hope so, because we all need a little more Teigen in our social feeds with her humor and unflinching honesty.