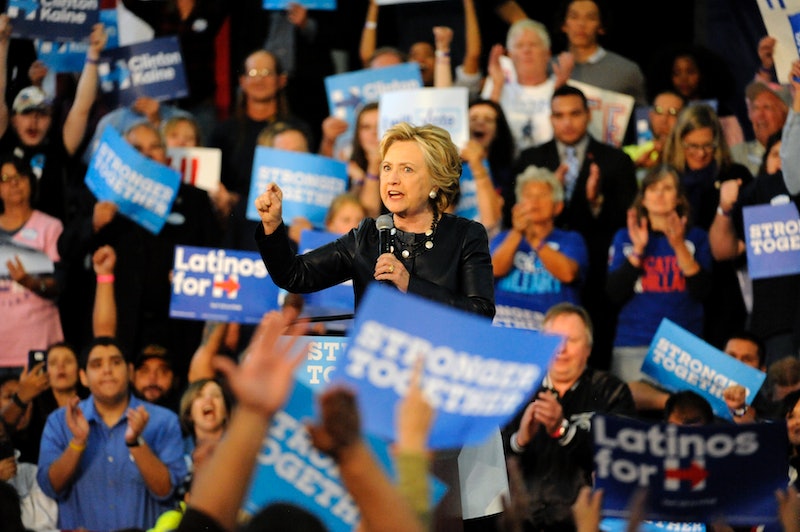 In 2016, we have our first-ever female major-party presidential candidate, who, based on projections going into late October, will likely be the first female president of the United States. On the other hand, we have a Republican candidate whose decades-long verbal, and alleged physical, assaults on women have become near-daily headlines. The historic nature of Hillary Clinton's campaign, juxtaposed with overt sexism from her opponent, might have you thinking that women will turn out for the Democratic nominee in droves. But that's not likely the case concerning young women; a new poll shows that more millennial men than women support Clinton.

The USA Today/Rock the Vote/Ipsos poll included 1,020 people between the ages of 18 and 34; of those, 400 were likely voters. Among likely voters in this age group, Clinton easily bested Donald Trump. But compared to the 65 percent of young men who support Clinton, only 47 percent of women polled do. Women polled were three times more likely to express support for third-party candidates — 18 percent planned to vote for either Gary Johnson or Jill Stein, compared to 6 percent of men.

But these numbers are perhaps not so surprising when we think back to the primaries. There was a large gender gap among the under-35ers between support for Clinton and Sen. Bernie Sanders. In a USA Today/Rock the Vote poll from January, Sanders had 4 percent greater support than Clinton among millennial men, whereas he led by 20 percent among women.

I believe the explanation lies in the fact millennial women are proving less willing to fall in line with a major-party candidate they don't believe in — something that poses a challenge to the ubiquitous critique that only the most privileged could afford to vote third party. And, while many disagree with the approach, it may well be because modern feminism entails a heightened awareness of privilege and disadvantage. According to a Harvard Public Opinion Project poll of Americans between 18 and 28, 37 percent of women identified as feminist, compared to 16 percent of men.

The intersectional lens of today's feminism highlights the struggles of people in poverty, people of color, LGBT individuals, and people abroad who are subjected to invasions and drone strikes launched by the United States. Clinton's pro-interventionist foreign policy record, her late-to-the-game approval of same-sex marriage, and her support for the problematic welfare reform bill and criminal justice reforms of the 1990s (to name a few things) may not instill confidence in some who are deeply concerned about the rights and the dignity of all people.

I wonder if maybe fewer young women are planning to vote for Clinton than young men because they are less willing to rely on establishment politics for solutions to the breadth of problems they see. Personally, I'd rather be part of the movement that shows major parties that they will not garner the millennial vote — which they will need going forward — if they do not begin to represent our interests.