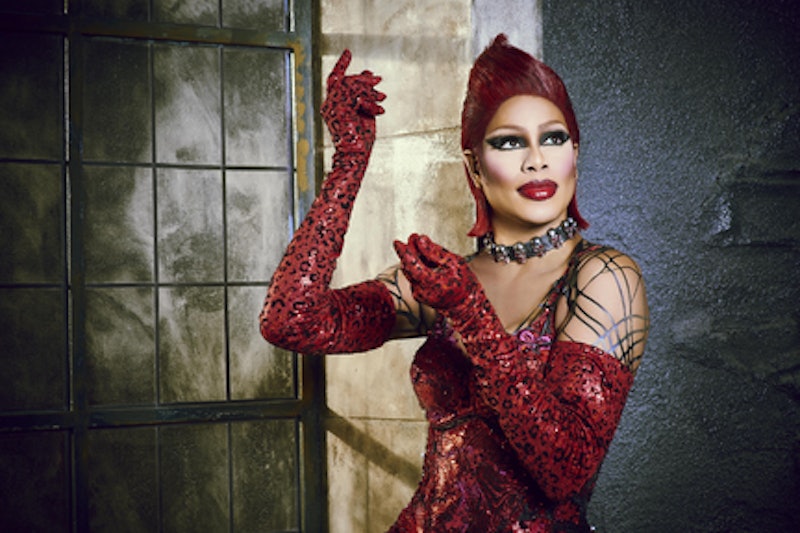 FOX's upcoming Rocky Horror Picture Show remake may feel like a bit of a time warp at first glance, but don't get it twisted — the highly-anticipated television event is a whole lot more than a replica of the 1975 film. The cast of the Halloween-themed special — which is going by the full title of The Rocky Horror Picture Show: Let's Do The Time Warp Again — are putting their own spin on the otherwise pre-established characters in an effort to provide fans with a different vibe than the one from the original film. And now, with the release of Laverne Cox's rendition of the Rocky Horror song "Sweet Transvestite," it's clear that Cox's style of the song veers in its own direction when compared to Tim Curry's original as well.

Cox's "Sweet Transvestite," which is featured on the new soundtrack for the television event, provides a much jazzier sound than Curry's does. With the assistance of background singers, big-band instruments, and more singing than talking, Cox's confidence in the role of Dr. Frank-N-Furter already shines through. She's made the song even more sexual, flirty, and totally dance-worthy by adding just a little bit of jazz — and emphasizing the very last (and highly-seductive) verse of the song.

When comparing the melody to Curry's version, it's clear that's Cox's version has been updated to fit in with modern times. While Curry's version shines a light on the classic rock sound of the '70s, Cox's version of the song throws things back to a jazzier time. It emphasizes the sound of the drums — preserving the song's original rock vibe — while also shedding light on the sounds provided by the saxophone and the trumpet in the background.

Basically, this track alone (and the wonderfully evil laugh at the 3:28 mark) totally proves that Cox is perfect for this role — and not only that, but she's also making it her own.