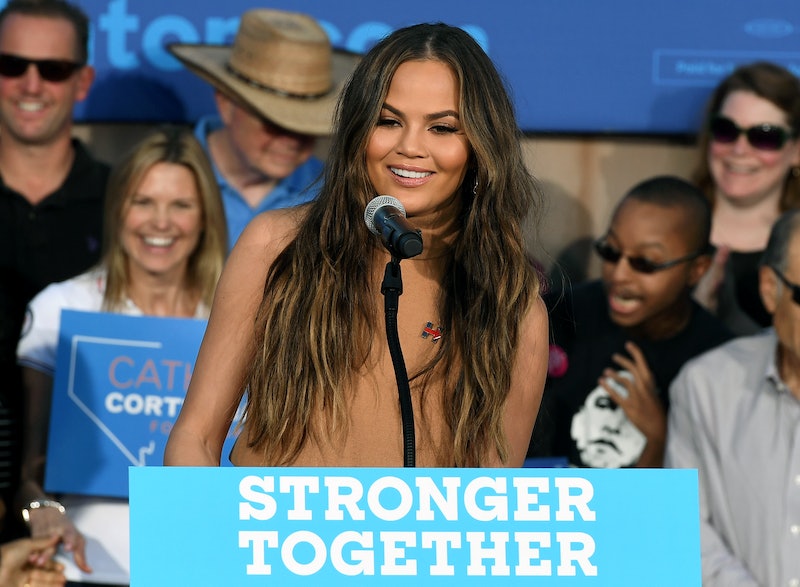 In addition to her skills as a supermodel, author, emcee, and chef, Chrissy Teigen can now add political consultant to her resume. Teigen gave politicians advice at the ongoing Forbes Under 30 Summit in Boston on Oct. 18, urging candidates to make their campaigns a social media experience that people can share with their friends.

Overall, Teigen advocated for the position that campaigns are about a mood or feeling that a candidate creates within their supporters, and social media is a tool to help them achieve that. "People want that picture, they want to have fun, they wanna get amped up and excited," Teigen said. Although Teigen has been extremely critical of Donald Trump's campaign in the past, she did give him credit for the enthusiasm that he inspires at his rallies. "Look at Donald's rallies. They go crazy, they go insane," which Teigen seemed to attribute at least partially to his social media persona and presence.

Teigen also made sure to compliment Hillary Clinton on her use of social media. "What she's been coming up with social-wise has been very spot on," Teigen said in reference to some of Clinton's recent video content centered on the peripheral issues of the campaign, like feminism and bullying.

Teigen warned politicians from appearing too eager in their efforts to adopt youth culture, with a seemingly specific call-out at Clinton. "There's one thing that I don't like that politicians do, when they try to be a little cool. They want to relate so badly, and they're like, whipping and naynaying; I don't like that kind of stuff. So don't go too far," Teigen suggested.

Clinton infamously attempted the nae nae on Ellen last year, which, according to Teigen, is more politically relevant than one might think. Although social media presence isn't as important to the qualifications of being president as a thorough understanding of the economy or foreign policy, that's not what campaigns are about in the current political climate, which Teigen seems to understand inherently.

Teigen has unique qualifications to comment on matters of social media, as its been a key factor in her meteoric rise to fame. Teigen's hilarious, poignant, and topical social media presence gave her a strong platform from which to build her personal brand, which now includes several TV shows and books. Politicians do actually have a lot to learn from the way celebrities cultivate and maintain a social media identity, and Teigen may be one of the most qualified people to teach them.