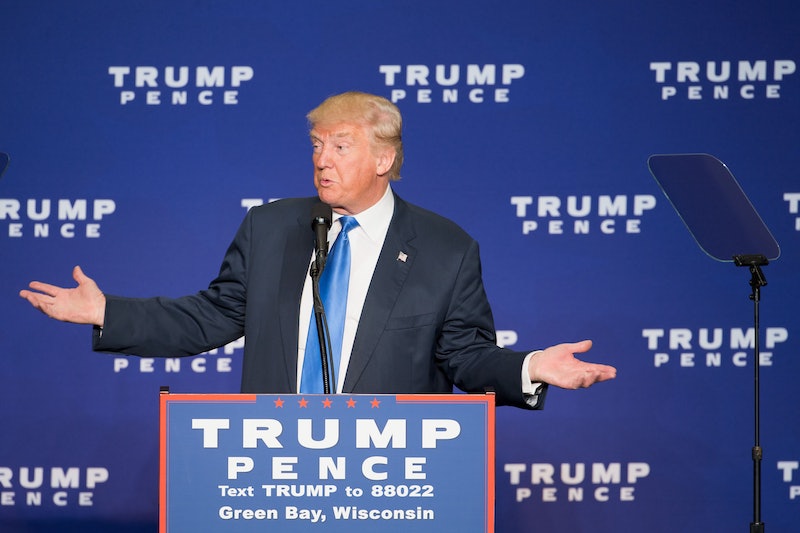 It's the home stretch of the election, and at this point all of us need a little comic relief, even if it comes in the form of some depressingly valid jokes. On Tuesday, The Huffington Post Comedy provided us with a great way to get ready for Wednesday's debate by creating the hashtag #EvangelicalTrump as a part of their Stupor Tuesday series. Many Twitter users joined in on the fun, and the results are pretty poignant and hilarious.

Back in January, Trump spoke at Liberty University (a conservative evangelical college), where he mispronounced the name of a book of the Bible. He received some blowback for the gaffe, but quickly moved on. As The New York Times reported, evangelical Christians are an important voting group for the Republican Party. However, Trump's actions during his campaign have tested the loyalty of this group. Given the need to win them over, in the last year Trump made an effort to meet with evangelical leaders and show that he is a good, Christian man.

But with so many of Trump's offensive comments made public, it's almost laughable to imagine that he really believes in the religion he claims he does and that is important to many of his supporters. So when HuffPost's latest round of Stupor Tuesday on Twitter centered around imagining Trump as an evangelical leader, users were quick to come up with hypothetical jabs at the nominee. Below, check out what Twitter thinks Trump would do as a religious leader.

Of course Evangelical Trump wouldn't believe a woman about her sexuality.

2. Be Skeptical Of Jesus' Heritage

Trump's concerns about immigrants would certainly affect him as a religious leader.

Because making money > helping others.

4. Brag About How Well He Sins

Why be a bad sinner when you can be the best sinner?

5. Claim Jesus Is An Undocumented Immigrant

In Trump's eyes, if there's no birth certificate, there's no proof. And even if there is, it still might not count.

6. Call The Holy Ghost A Loser

No diving being would be safe from Trump's attacks.

If it doesn't go the way he wants, it's not real.

Because Trump's business ventures have turned out so well...

9. Boast Of His Great Temperament

Trump would be much better at being Jesus. He'd be the best Jesus you've ever seen.

11. Insult Jesus' Ability To Rise From The Dead

Three days is just too long.

12. Twist The Bible Around To Uplift Himself

What's the Bible for if not to praise yourself?

13. Slight Followers On A Business Deal

As Trump implies, if they don't do a good job, maybe you don't have to pay them.

14. Gloat About His Carpentry Skills

Did Jesus have the stamina to build a Trump Tower? I don't think so.

15. Alienate Every Race Besides His Own

Well, he's done that in real life, too.

These are definitely jokes, many of them using sarcasm and Trump's own words against him, and should be taken with a grain of salt. While they point out some harsh truths about Trump's ideas about America, they're still a little lighthearted break from the day-to-day of the election cycle that everyone can certainly use.