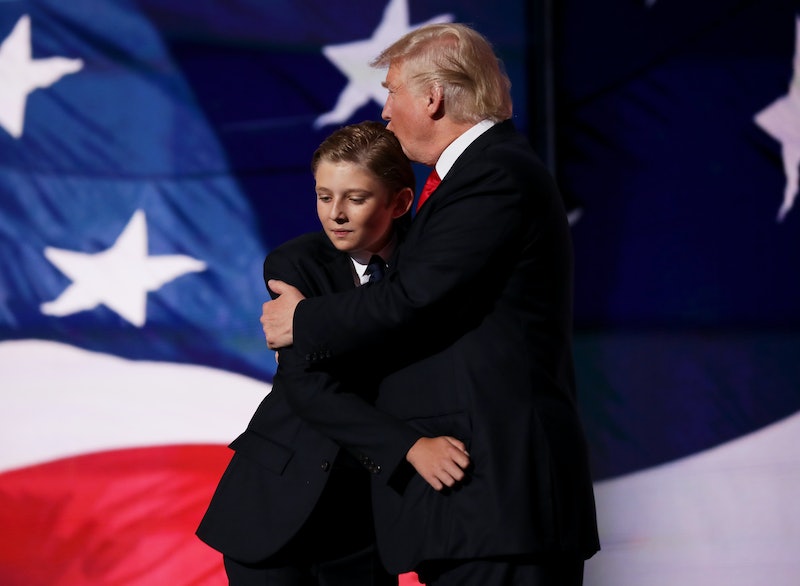 Donald Trump's children, especially his oldest daughter, Ivanka, have actively supported their father's campaign during this election. Ivanka, Donald Jr., Eric, and Tiffany have all given speeches, done interviews, and headlined fundraisers to benefit the Trump campaign. Their youngest sibling, Barron Trump, has been largely absent from the campaign trail, however. This is probably a good judgment call — Barron is only 10 years old.

Melania Trump, whose only child with the Republican nominee is Barron, has discussed spending a significant amount of time with her son at home, sensing that the heavy travel schedule of a presidential campaign would not be the best thing for a young boy. In an interview with Us Weekly , she also touched on the subject of protecting Barron from the hatred being aimed at his father and the rest of the family during this election. “We’re dealing with it," she said, "and I’m teaching [Barron] the right way and giving him morals and tradition and teaching him values at home."

Keeping her son away from the third debate is wise if Melania wants her son oblivious to all the sexual assault charges his father will probably be asked to acknowledge. Even if Chris Wallace, the debate moderator, goes easy on Trump, the conversation is almost guaranteed to get ugly. With three weeks left until Americans cast their votes on Nov. 8, the stakes are high and the accusations will be tough. The odds that it'll be a family-friendly affair are slim to none.

Anyway, the 10-year-old most likely prefers to stay out of the formal events his parents and siblings must constantly attend. The Republican National Convention was one of the few events the youngest Trump attended, and like most kids his age probably would, he spent the majority of his father's speech yawning and looking bored.

Despite not spending much time with Trump, Melania has assured the press about her young son's pride in his father. “He supports his dad 100 percent. Of course, we both miss him because he is on the road a lot, but [Barron] understands and he’s doing great.”