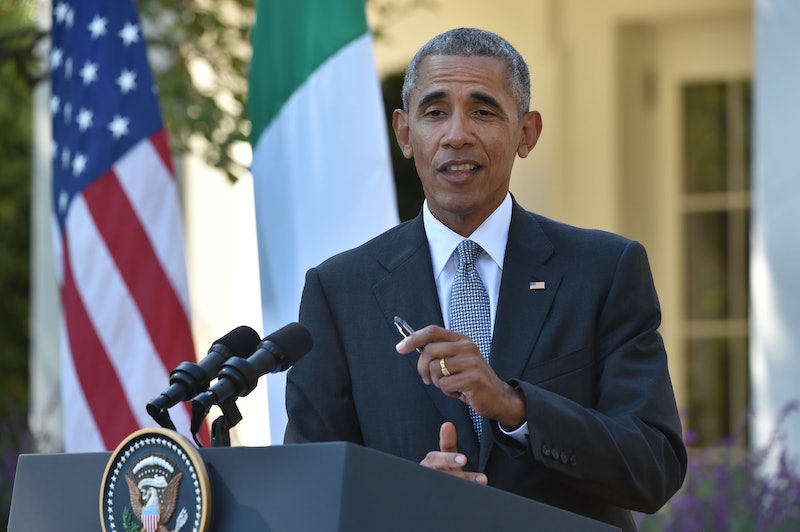 It's a cage-match election of personal attacks and insults, and a new fighter has entered the ring. President Obama, speaking as part of a joint press conference outside the White House with Italian Prime Minister Matteo Renzi, called out Donald Trump's comments about a "rigged" election. In addition to pointing out how little evidence there is for Trump's claims, and how difficult it would be to actually rig an American election due to the country's decentralized election apparatuses, Obama ripped into Trump's attitude.

"I'd advise Mr. Trump to stop whining and to go try to make his case to get votes," the President told reporters. Obama said Trump's behavior "doesn't show the kind of leadership and toughness you'd want out of a president."

This isn't the first time that Obama has spoken out against Trump. Shortly after the DNC, Obama said Trump was "unfit," and called upon Republican leaders to rescind their endorsements of him. But this time is interesting for the way that his remarks are directed not at the American people, or the GOP, but at Trump himself. By specifically asking Trump to change his behavior, he implicitly asks for a Trump response.

Of course, there is no way that Trump could respond well. If Trump lashes out at Obama the way he has in the past towards others who have criticized him like Alicia Machado and the Khan family, he proves Obama's point — that he cannot handle losing the election fairly and, well, whines. It would also probably look bad for him to go after a president much more popular than he is.

But if Trump doesn't respond to Obama at all, he invalidates one of his main arguments for his candidacy — that he will fight back for losing respect. He's repeatedly argued that the president is weak and doesn't earn respect from foreign leaders. He has said that he would respond toughly to those who insult America's image. For him to not respond when Obama implicitly compares him to a child would ruin any claim that he'll stand up for American respect.

This kind of political tactic is not new. In 2004, political pundit Josh Marshall coined the term "bitch slap politics" for the imbroglio over a group questioning John Kerry's war record — fail to respond and he looks weak; respond, and he gets stuck in a back-and-forth over a subject that makes him look bad. Marshall praised Kerry's response to that attack for changing the conversation on it through a well-worded answer.

And that's the real problem for Trump. He needs to respond to Obama if he wants his tough-guy act to stick. But he has to do so in a way that doesn't whine. This is a difficult proposition for a diplomat like Kerry. But for Trump, who can't seem to stay on message long enough to read a short statement, it's probably impossible to bulls-eye this target. One way or another, he'll probably prove Obama right.