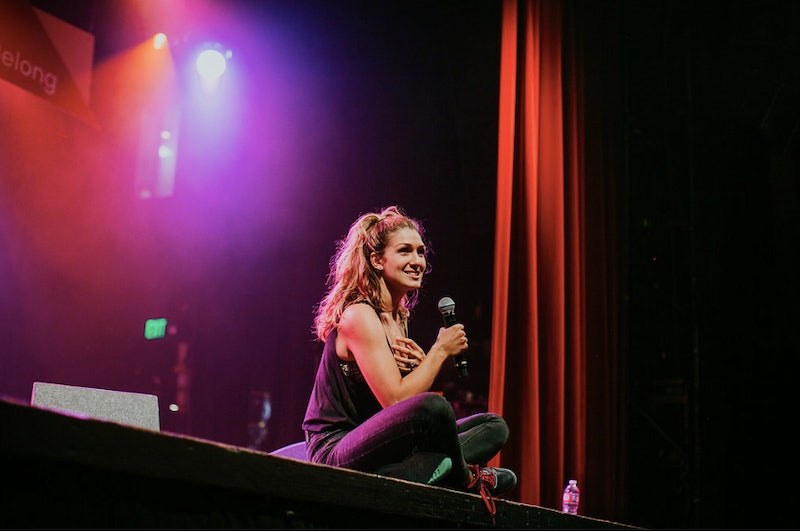 Admittedly, I was somewhat unfamiliar with the organization I Am That Girl before attending the first event of its kind, #Girl2016, over the weekend. I went into the experience with an open mind, but I had a feeling that I knew what to expect: speakers with motivational speeches who would preach the power of feminism. But oddly enough I was proved wrong in the best way. Little did I know, I'd leave with a new obsession with this organization, an adoration for its founder Alexis Jones, and a completely enlightened mindset, thanks to a college freshman who sat next to me.

As a 25-year-old among a crowd of high school and college students, I was feeling like the mother hen. But they took me under their wing and opened my eyes. Belle, a freshman at Chapman University, told me why she joined I Am That Girl and why its weekly meetings have been a highlight of her college experience. Belle said the girls discuss anything and everything openly, no matter how controversial. Because sometimes, women crave discussing real-life issues beyond boys and clothes. With their tea and hot chocolate in hand, members were forced to ask themselves: "Why am I a badass?"

At #Girl2016, every person who stepped foot in LA's El Rey Theatre owned their badassery all day long.

Across the stage, banners read: "Be Seen, Be Heard, Belong." And that's exactly what I Am That Girl stands for. An organization that isn't labeled based on political, social, or economic standpoints, I Am That Girl unifies women to embrace who they are and to be vocal, no matter what their beliefs may be. That day, I witnessed women of different ages, shapes, sizes, and races dancing, hugging, singing, and smiling. In this open forum which existed solely to cheer them on — flaws and all — they were free.

Belle had nothing but the best things to say about the organization's founder Alexis Jones. She called her down-to-earth, "real" and said she loved why Jones started IATG in the first place. Jones lived up to the hype when I met her, and then some. It was obvious the 33-year-old was an open book who wants to help others be more open, too. From immediately hugging me off-stage, to telling the audience she was a "fraud" when others thought she had a perfect life, I realized her genuine nature made her the best damn role model I'd seen in a while.

"I had checked every box but was still unhappy," Jones told the crowd. “You have to get uncomfortable to find your why.” Jones wasn't the only one who allowed her vulnerability to empower those who had the privilege of watching. After putting on an extremely emotional performance of "Fight Song," artist Rachel Platten opened up about her "obsession" with self-help books and started crying when asked to give advice to her older self. "The rejections are part of the journey, that’s what you grow from," she said. I was just one of many in the crowd who teared up with her.

Author Arielle Estoria gave a powerful dialogue about coming into her own, saying, "One day I found her, my voice... Your beauty that you posses only belongs to you." Later, Jones had her friend Lizzie Velasquez participate in an extremely moving interview. Velasquez is the 27-year-old motivational speaker with a rare syndrome that doesn't allow her to gain weight. In front of a crowd of women hanging onto every word she said, she disclosed the horrifying nature of bullying she'd experienced from her appearance, including death threats. "I decided I can either let those words define me or use those words to define myself," she said.

Ironically, perhaps the most moving part of my experience was Jones' perspective on the importance of getting male voices heard, too. Belle told me how a discussion of rape culture and the rare occasion of hearing a male victim's point of view was extremely impactful for her. Although Jones is set out to empower females, that doesn't mean discrediting males. (Hence the high demand for her to speak to professional athletes and "redefine manhood.")

To drive that point home, the audience had Dancing With the Stars' Derek Hough on to give his perspective. He spoke about the importance of integrating men in I Am That Girl's mission and how he found peace in the competitive world of dancing. After finding a support system and inner confidence, Hough "[felt] good enough to where [he] don't rely on that judgement."

I can honestly say I feel like a stronger, more open-minded woman after attending #Girl2016. Watching wide-eyed young females feeling confident and ready to take on the world was, for lack of a better word, everything. As the CMO of Levi's, Jennifer Sey, said: Their potential is truly limitless. "It's our life's work to become who we are," said Sey. "You're the future of womanhood in this country." With more and more women taking on Jones's mindset, the future looks bright. I wish I Am That Girl was around when I was in high school and college, but better late than never.