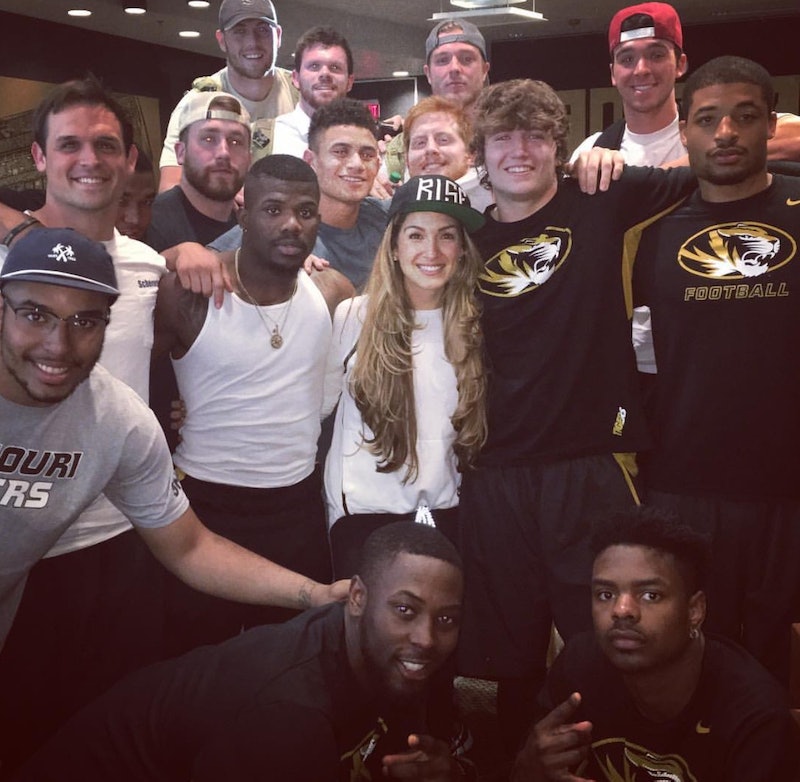 A few weeks ago, when I agreed to meet with activist Alexis Jones, I had never heard of Brock Turner. By the time I finally sat down with her for an interview, however, our conversation couldn't have been more timely. That week, one woman's letter addressed to her rapist — the 20-year-old former Stanford swimmer Brock Turner — had gone viral after it was posted on Buzzfeed. Now, everyone from Vice President Joe Biden to the actors from Girls have come forward to support her and to call for an end to rape culture, especially on our college campuses, where one in five women will be sexually assaulted on her way to getting a bachelor's degree.

But beyond standing in solidarity, how can we actually change rape culture — especially among student athletes like Turner, who are setting the example for other young men? Jones, founder of the project ProtectHer, has been trying to answer just that question for years. She's been touring the country for two years now, talking to young male athletes in high school and college about sexual assault and consent, one locker room at a time. She chooses to give her presentations in that space because she knows it is sacred to them; a place where they consider what it means to be a man, and a winner.

A self-described "all-American, southern belle, Texas tomboy" who's married to a former Division I college basketball player, here is Jones' approach to grabbing her audience's attention: Before she enters the room, she has the coach read her bio, which — due to her background as an athlete and host at Fox Sports and ESPN — she says "makes her sound like a dude." Then, she enters the room, and their jaws drop. She's the hot older sister, the very type of woman they hope to one day be brave enough to approach at a party. She pulls up a slideshow, and begins to show the familiar stats.

"They glaze over, and they’re like, Here we go," Jones tells Bustle. "But then, because of social media, I've found and put pictures of their sisters and their girlfriends and their moms, and I click the next slide and I’m like, 'But what if it was her?' Then all of a sudden, you see and hear a visceral gasp, because now, a stranger just came to give a presentation, they’re already confused that I’m a chick in the first place, and then I put up a picture of their 16-year-old sister, and I memorize 10-15 names and I’m like, 'What if it was Jenny? Or Lauren? Or Cammy? What if it was Teresa?' And they’re welling up with tears because they’re not imagining the girls they want to hook up with."

From there, Jones encourages the vulnerability in the room. She asks the high school and college athletes to ask questions. "All these hands start going up, asking questions like, 'I worry about my sister. I think she really struggles with confidence. How can I better support her?' 'I think my girlfriend has been raped. I don’t know how to talk to her about that.'" They ask about what constitutes consent, how to ask for it, and how to know if someone can consent in the first place if they're drunk.

Jones says many of these young male athletes are very confused about what constitutes consent when she asks them to define it. "They’re raising their hand and one guy — I literally thought he was being sarcastic — he was like, 'You know, when she’s liking all my pictures on Instagram.'" He wasn't kidding.

The thing that strikes her most, she says, is just how insecure many of these young jocks are. Jones remembers one star quarterback, who admitted, "If I go to a party and I see a girl across the room, I don’t have the confidence to walk up and talk to her. I’ll get my buddy to go talk to her friend to get her number so that I can text her from across the room."

Jones was astounded. "I was literally like, 'If you’re poster boy, other guys are screwed!'" she says. "I think that’s one of those things that’s kind of shocking, that caught me off guard, just because these boys are big, tough and rough, and the most popular boys in school ... they’re actually super insecure as well."

But she also hears them express beliefs that are discouraging, at best. Jones says many of these young male athletes are very confused about what constitutes consent when she asks them to define it. "They’re raising their hand and one guy — I literally thought he was being sarcastic — he was like, 'You know, when she’s liking all my pictures on Instagram.'" He wasn't kidding. "Another guy said a girl consented because, 'She told my cousin that I was hot.' The more ridiculous the response, the more the other guys were like, 'Right? Yeah, totally!'"

Jones is clear about the definition of consent, but also seems to frame the ability to obtain it in the first place as a test of their very masculinity. "One of the guys was like, 'Why am I in the wrong if a girl’s blackout drunk and is trying to have sex with me? Like, if I’m bragging about that in the locker room, what’s wrong about that?' And I’m like, 'Yeah, valid point. But it’s kind of like Roethlisberger walking into a bar, talking shit about beating the Detroit Lions in ‘08 when they didn’t win a single game the entire season. So that’s what you’re going to brag about?'"

In other words: What, you afraid to get consent? Bragging about banging someone who would have been easy to overpower anyway? Pussy.

The idea that young men can best understand the importance of obtaining consent through sports analogies is, of course, slightly maddening. But it is also, indisputably, a potentially effective method. Speaking with Jones, I couldn't imagine a single teenage or young adult man (hetero or not) left un-charmed by her; I picture them all wanting to do exactly whatever she said. I wanted her to clone herself and deliver her talks not just at every locker room, but to every boy in America. Luckily, she's already on it: Jones says she her goal is to expand ProtectHer into every high school in America within the next few years.

Though student athletes may be just a small sector of the many young men out there who need to have this conversation, Jones says she believes that they are the ones setting the tone for their peers — and that's why she's going after them first. If Brock Turner, Steubenville, and Ray Rice are any indication, she's definitely onto something.

Or, as Bustle writer and former college athlete Ray Gallagher put it in her essay on sports culture breeding rape culture:

The heart of sports culture in general rests on existing domains of privilege: Jock culture holds its athletes on a pedestal. If you're the best on the field or the court, you can do no wrong. Male athletes are prized and rewarded for being aggressive, competitive, and physically dominant on the field, behavior that has a tendency to carry over off the field. Athletes are told that "being on the team can get you any girl you want." Good-looking women are no different than championship trophies ... you see rape-meets-sports culture play out in more personal ways on college campuses; the way that guys pay a cover to get into sports parties, but girls get in for free; the way women are called "sluts," but men are called "champs."

What's interesting is that Jones is trying to use that very sports culture to end rape culture. "When you’re like, 'Bro. I need a hero,' they’re sitting up in their chairs and being like, 'Yeah. I want to be that,'" Jones says. "When you are able to spell out, 'Are you a protector or are you a predator? Where do you fall in this spectrum?' Now, they’re imagining their 16-year-old sister — and if anyone did anything to her — and now you’re speaking to that higher power inside of them."

But defining masculinity as being a protector of women and a hero seems to me to potentially be the other side of the same problem's coin. In the suggestion that men need to be heroes and protectors of women, we reinforce the culture, on some level, that necessitates women be protected from men in the first place.

At the same time, on a practical level, I also have a feeling Jones' method could work on a large, implemented scale — much better than simply spewing stats, anyway. It would certainly be more productive than whatever else it is we've been trying as a culture; this cycle of being outraged, making a PSA, and moving on, until the next high-profile sexual assault.

The root of this problem — the fact that boys are being raised without learning to express their emotions, questions, and insecurities freely — is what I am most excited to see ProtectHer addressing. Because, contrary to popular belief, we don't need heroes or protectors. We need men who aren't afraid to be emotionally vulnerable and ask questions, men who aren't simply trained to act out their many insecurities in the form of domination and violence, points and field goals.