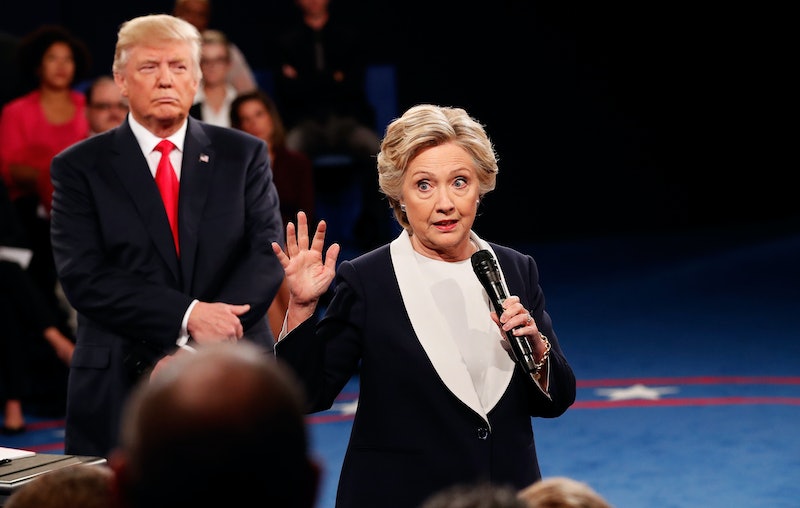 With how crazy this election cycle was, I'm sure you're in dire need to know where you can watch live coverage of the 2016 election. Election Day (Nov. 8, for those who need a reminder) is quickly approaching, which means it's time for you to plan your day accordingly. Obviously, you'll need to take time out your work day to vote and then comes your 2016 election party that evening. I assume you're going to have at least a small get together to watch the polls and to see whether or not Hillary Clinton will make history as the first woman president of the United States or if Donald Trump will run the country. Whether or not you throw an election-themed party, you'll still want to know where and when you can watch live coverage.

Of course, and like with any breaking news, you can tune into the main news networks, including CNN, FOX News, and MSNBC. ABC, CBS, NBC, FOX, and PBS will also cover the event, but it's unclear when election coverage will takeover regular scheduled programming on these channels. Even earlier in the night though, it's likely that breaking election news will interrupt whatever you're watching that night or news briefs will be broadcast during commercial breaks. Either way, expect the election to takeover TV that night and don't fear that you'll miss it, because the presidential election is a big deal.

In addition to news networks, Showtime is also getting in on the election coverage with help from late-night host Stephen Colbert. His special is titled, Stephen Colbert's Live Election Night Democracy's Series Finale: Who's Going To Clean Up This Sh*t? It will air Nov. 8 starting at 11 p.m. EST.

If you don't own a television, you can, of course, stream coverage online. Did you know that BuzzFeed News has partnered with Twitter to stream election night coverage live from BuzzFeed's New York headquarters? It begins at 6 p.m. EST on Twitter.

If you'd rather avoid social media this particular evening or don't have a Twitter account, there's a good chance you can stream the coverage via YouTube, especially since many outlets have streamed election events before, including the debates.

Really, the options are endless when it comes to watching 2016 election coverage. Wherever you turn and whichever medium you prefer, you will not miss who will become the next leader of the United States.