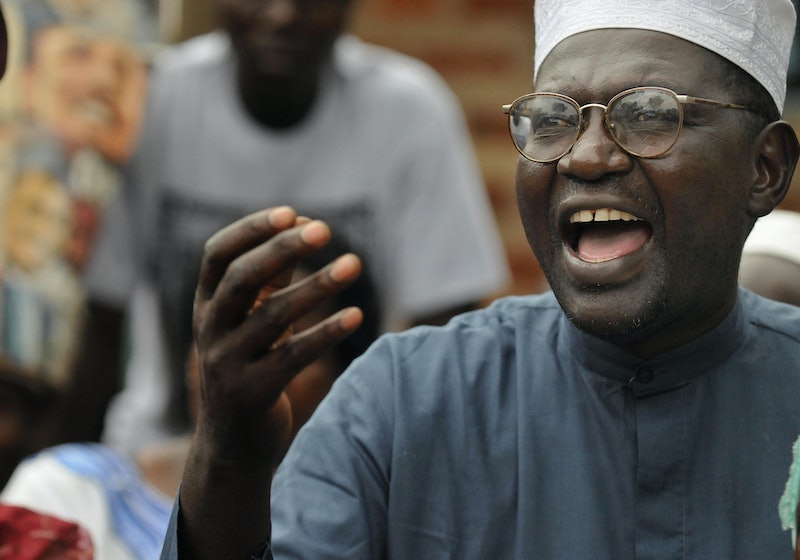 It seems that this year's presidential election has introduced a new game for candidates: provoking each other with controversial debate guests. It all started when Hillary Clinton invited anti-Trump'er Mark Cuban to the first presidential debate, which elicited retaliation from the Republican nominee. Ahead of Wednesday's match-up in Las Vegas, the Trump campaign confirmed that Trump will bring Malik Obama, the president's half-brother, as a guest to the event.

Trump's latest invitee is one of the most random yet, as it's unlikely Malik's presence will sway viewers' opinions on Clinton. The president's half-brother lives in Kenya, but he has U.S. citizenship. Although Malik reportedly visited his brother just last year at the White House, their relationship hasn't always been smooth sailing. According to Time, Malik has previously expressed his frustration over the president's lack of involvement in the family foundation that Malik set up.

Wednesday's debate won't be the first time that Malik has popped up in election headlines. Back in July, The New York Post published an interview with the elder Obama, in which he announced that he would be voting for Trump in the November election. "I like Donald Trump because he speaks from the heart," he said. "I would like to meet him." If the duo haven't met face-to-face yet, Malik's chance will soon arrive.

It's unclear exactly why the Trump campaign decided to invite Malik to the debate, but it could have something do with his support of the Republican nominee. It could also have something to do with his opposition to Clinton. Also in the Post interview, Obama expressed disappointment in the former secretary of state's handling of the U.S. relationship with Libya.

"I still feel that getting rid of [Moammar] Khadafy didn’t make things any better in Libya,” he said. “My brother and the secretary of state disappointed me in that regard.”

Either way, the decision to invite POTUS' half-brother to Wednesday's third and final debate between Trump and Clinton seems to be just another stunt from the GOP nominee. After all, the president himself isn't expected to attend, and it's hard to believe that Clinton could be thrown off by seeing her former boss' estranged half-brother in the room. On top of that, Clinton isn't a stranger to such "surprises." Prior to the second face-off, for example, Trump invited women who have accused Bill Clinton of sexual assault to join him in a press conference. Bill has denied each of the women's allegations.

For her part, Clinton has reportedly invited Cuban once again, as well as a Trump International Hotel employee. Cuban attended the first presidential debate in New York, and Ofelia Diaz Cardenas, the Trump hotel employee, previously spoke at the Democratic National Convention in July, according to The Las Vegas Sun. On both sides of the ballot, the debate guest lists have turned into unfortunate stunts that don't really seem to have an impact on the opposing candidates.