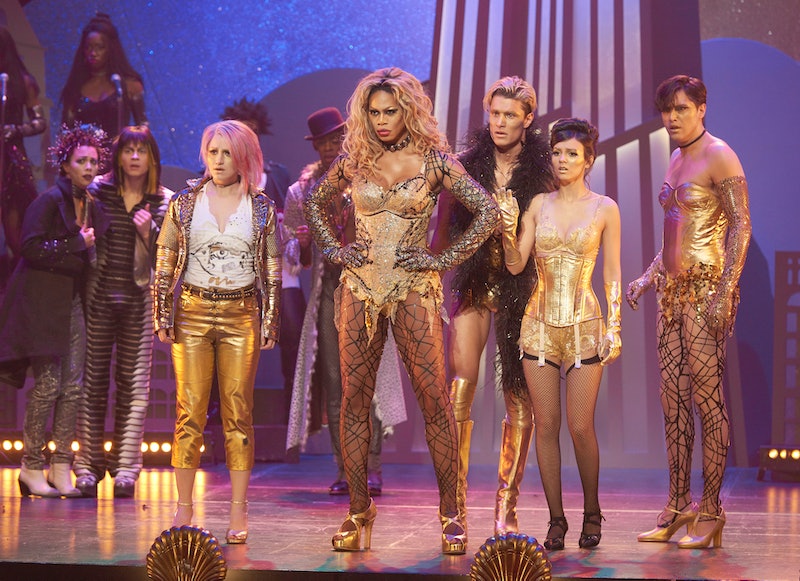 In 1975, The Rocky Horror Picture Show was released in theaters and it wasn't appreciated all that much until years later. The cult classic film still runs in movie theaters today in midnight screenings filled with loyal fans who cosplay all the characters and yell at the screen. On Thursday night, FOX gave fans the chance to shout and sing along to a 2016 remake of the movie in the privacy of their own home — but there are lots of differences between the FOX Rocky Horror Picture Show and the original movie.

Because the new Rocky Horror is being shown at 8 p.m., some adjustments had to be made to the sexual content because it's family time. After all, the movie is about innocent couple Brad (Ryan McCartan) and Janet (Victoria Justice) wandering into the lair of Dr. Frank-N-Furter (Laverne Cox) and experiencing a sexual awakening, among a lot of other wild and weird occurrences throughout the course of the movie. "They've been really creative with some of the sensuality of the original and how to present that in a way that won't raise red flags," Reeve Carney (who plays Riff Raff) told Pop Sugar.

Personally, it was tough to see some of my favorite scenes from the original movie re-imagined, but overall, the FOX movie remains true to the spirit of the 1975 film. Here are some of the major differences between the two.

The 1975 Version: A set of anonymous, yet iconic, red lips against a black background sing the opening song "Science Fiction/Double Feature" as the credits roll.

The FOX Version: The movie opens with an usherette wearing bright red lipstick and singing the song as she leads fans into a movie theater. That crowd is a salute to the longtime Rocky Horror midnight screening loyalists.

The 1975 Version: Sweethearts Brad and Janet get engaged right after their friends' wedding at a cute church. They dance and sing in the nearby cemetery, then they have a cute mock wedding as they declare their love for each other in "Dammit Janet." Brad is extremely uptight and moody, even as he talks with Ralph, the groom.

The FOX Version: Brad and Janet still get engaged to "Dammit Janet," but most of their song and dance takes place in the cemetery only. Brad is also way cooler and actually has a sense of humor.

The 1975 Version: You are the audience, watching the movie.

The FOX Version: Once again, the audience shown is a homage to the midnight screening tradition that has developed over the years. This meta-audience in the movie (that is also watching the film with you and me) yells at the screen and uses certain props, just like fans do in Rocky Horror midnight showings.

Director Kenny Ortega said that honoring this was a big priority for the remake of the movie, according to Slashfilm. "When we first embarked on developing this re-imagining, the very first thing laid out was we wanted to celebrate the fans with this new departure," he said.

The 1975 Version: He offers wry commentary and exposition on Brad and Janet's adventure.

The FOX Version: Same deal, but this time he's played by Tim Curry (the original's Dr. Frank-N-Furter) and he has an assistant who occasionally lets out a frightful scream.

The 1975 Version: Riff Raff introduces Brad and Janet to Dr. Frank-N-Furter's castle party, where everyone wears sunglasses at night and does the "Time Warp." It's so overwhelming that Janet faints for a bit. The criminologist leads the audience through the dance with a handy chart and even does it himself in the song.

The FOX Version: Riff Raff takes Brad and Janet into the party, which looks like a prom thrown by Hot Topic. Janet doesn't faint — she and Brad just get caught right in the middle of it all. The Criminologist instructs his assistant in how to do the "Time Warp" in lieu of a chart. Curry suffered a stroke in 2013 and exclusively uses a wheelchair, according to People.

The 1975 Version: Dr. Frank-N-Furter enters through an elevator and Janet faints (again). Frank settles into a throne and sings the tune.

The FOX Version: Dr. Frank-N-Furter is lowered into the scene with some kind of crane and Janet faints. Frank settles onto the gold stage, and shows off some epic dance moves, while singing the song. (The elevator is shown later.)

The 1975 Version: Dr. Frank-N-Furter reveals a mummified-in-water Rocky Horror in a lab hued in red and pink. Rocky hangs on a light fixture for a bit, then gets stripped of his mummy wrapping and runs away from Frank.

The FOX Version: Dr. Frank-N-Furter melts a frozen Rocky with lightening in a blue industrial-looking lab. Rocky rocks around in his ice chamber for a bit, has some trouble walking, and tries to run away from Frank.

The 1975 Version: Rocky wears a gold Speedo and he is oiled up. He seems totally game for Frank's world.

The FOX Version: Rocky wears G-rated gold gym shorts and he isn't as oily at all. Rocky looks stunned at Frank a lot.

The 1975 Version: The audience sees Frank's deception mostly through shadows in Brad and Janet's bed's veils. Frank hooks up with both of them.

The FOX Version: No veils or shadows. Viewers see it all — but the sexual content isn't as sexual as the original here. Frank hooks up with both of them.

The 1975 Version: This is probably the most risque sequence in the film, in which Janet helps Rocky with a wound in the lab and then winds up, um, rounding the bases with him, ending with a "home run." Magenta and Columbia relentlessly mock Janet.

The FOX Version: A way tamer version. Janet still helps Rocky with his wound, then leads him to her bedroom, where they mostly jump on the bed and get it on once the song fades to black. Magenta and Columbia are more supportive this time.

The 1975 Version: After freezing pretty much everyone, Frank-N-Furter makes everyone sing in black lingerie and fishnets in "Rose Tint My World." Then Frank (wearing red and black lingerie) enters for "Fanfare/Don't Dream It, Be It" with a backdrop saluting RKO films. Everyone ends up in a pool, swimming and kissing, but Frank returns to the stage for "Wild and Untamed Thing." The chairs in the theater are empty, but Frank imagines an audience.

The FOX Version: After freezing pretty much everyone, Frank-N-Furter makes everyone sing in gold lingerie and fishnets in "Rose Tint My World." Then Frank (wearing a glittery robe) enters from above for "Fanfare/Don't Dream It, Be It," lounging on some kind of fake cloud. Everyone ends up in a pool, swimming and kissing, until Frank returns to the stage for "Wild and Untamed Thing," which involves the meta-audience and ties the whole movie together.

The FOX Version: 1 hour and 29 minutes (plus commercials). It may seem minor, but if you watch both movies simultaneously (like I did, ahem), you'll notice that this version has a faster pace.

So while the FOX version has its differences from the original, the spirit of the 1975 Rocky Horror lives on — just like it has for 40 years.

More like this
24 Years Ago, 'Friends' Dropped Its Most Underrated Ross & Rachel Episode
By Grace Wehniainen
What Does Nancy Jo Sales Think Of 'The Real Bling Ring'?
By The Editors
'Survivor' Is Finally Coming Back To UK Screens
By El Hunt
Netflix Reveals First Look At Wednesday In The 'Addams Family' Spinoff Series
By Bustle Editors
Get Even More From Bustle — Sign Up For The Newsletter