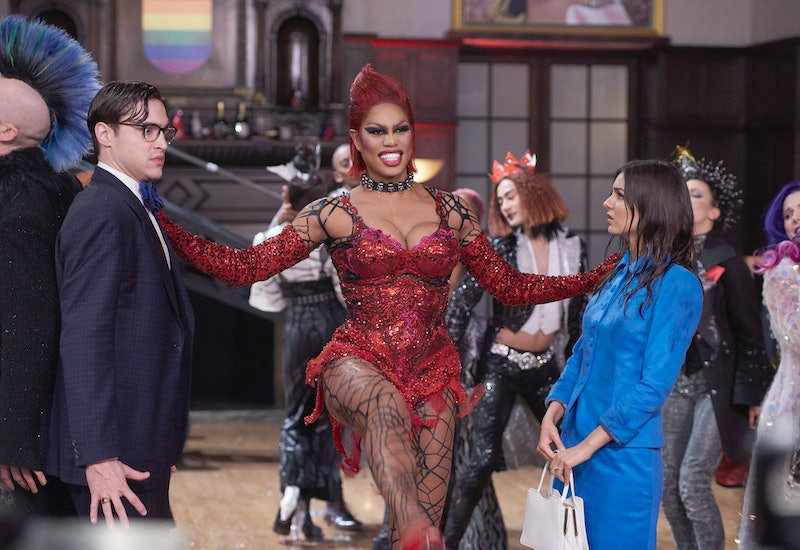 Maybe someone left a light on over at the Frankenstein Place. But the original Rocky Horror Picture Show is the first movie that springs to mind when I hear the term "cult classic." It's a song-filled B-movie homage that's impossible to accurately describe to someone who's never seen it. It's Tim Curry in a pair of thigh-highs; Meatloaf crashing through a wall on a motorcycle; and a dance craze that won't leave your head after you learn it. With its remake TV movie, Fox is getting in on the musical that launched thousands and thousands of midnight screenings. The Rocky Horror Picture Show: Let's Do The Time Warp Again airs on Oct. 20 and will inevitably be compared to the 1975 phenomenon. Production values have improved in the last 41 years and a new ensemble cast will be filming these iconic roles. But how else can you expect The Rocky Horror Picture Show to differ from the original movie?

The 1975 movie is an adaptation itself. The project was originally conceived and performed as a stage show; it debuted in an experimental theater in London in 1973 and on Broadway a couple of years later. Rocky Horror is a tribute to classic science fiction and campy horror that's inspired a fan movement, several revivals, and now, this glossy remake. Say what you will about daring to touch a legendary piece of film history, but The Rocky Horror Picture Show has always thrived on fan interpretation and engagement.

With that in mind, here are a few changes to look for.

Audience Participation Will Happen On Screen

Slash Film reported from the show's presentation at the TCAs this summer that director Kenny Ortega's first priority was to honor the participatory legacy of the movie. "When we first embarked on developing this re-imagining, the very first thing laid out was we wanted to celebrate the fans with this new departure," he said. And there's a script to being a Rocky Horror fan. If you attend a midnight screening, you'll hear audience members yelling responses to the characters' dialogue, throwing the same materials at the screen, and dancing together in the aisles. In this movie, the audience is incorporated as a character. The movie will be framed by a group of fans filing into a theater to watch, react, and party.

Some Of The Darker & More Sexual Moments Will Be Censored

The Rocky Horror Picture Show will be airing starting at the family-friendly 8:00 p.m. hour. How did the production deal with obscuring explicit adult themes for the parents watching with their kids at home? It's not your average musical that includes partner-swapping, surprise cannibalism, and this level of nudity. Actor Reeve Carney plays Frank-N-Furter's butler Riff Raff and told Popsugar, "They've been really creative with some of the sensuality of the original and how to present that in a way that won't raise red flags." Victoria Justice plays Susan Sarandon's character Janet and added, "I think it's more left up to your imagination."

Brad Will Be A Little Less Square

Ryan McCartan is in the role of Janet's vanilla fiance Brad. And in the same Popsugar interview, he hinted that this movie's Brad would be a little more enamored of Frank-N-Furter's hedonistic lifestyle than any that have come before.

The Palette Will Be Different

Tim Curry's Frank-N-Furter slayed in black leather and lingerie. Laverne Cox will be sporting a more colorful wardrobe in her rendition of the pleasure-seeking mad scientist. Instead of approximating the set design and costumes of the 1975 movie, Fox's version is going its own way.

The Music Will Be Re-Imagined For A 2016 Audience

Don't worry: "Toucha Toucha Touch Me" and "Science Fiction Double Feature" haven't been cut or given a Pitbull remix. But the arrangements of the show's score have been revamped through an interesting family connection. Lou Adler is a producer of the Fox movie, but his involvement with Rocky Horror goes all the way back to the stage show. His son is songwriter and producer Cisco Adler, who has produced the music for the new Rocky Horror. At the TCAs (via Slashfilm), Lou Adler said that he and Ortega instructed Cisco Adler to give the record a contemporary feel without making it unrecognizable.

One of the themes of The Rocky Horror Picture Show is that there's room in the world for everyone's passions and proclivities, no matter how unusual. Though the Fox movie is taking its liberties, it's well within the spirit of the 1975 movie to try out something new.

More like this
What Does Nancy Jo Sales Think Of 'The Real Bling Ring'?
By The Editors
'Survivor' Is Finally Coming Back To UK Screens
By El Hunt
Netflix Reveals First Look At Wednesday In The 'Addams Family' Spinoff Series
By Bustle Editors
The Bling Ring's Alexis Neiers Has Come A Long Way Since Her 'Pretty Wild' Days
By Sophie McEvoy and Arya Roshanian
Get Even More From Bustle — Sign Up For The Newsletter