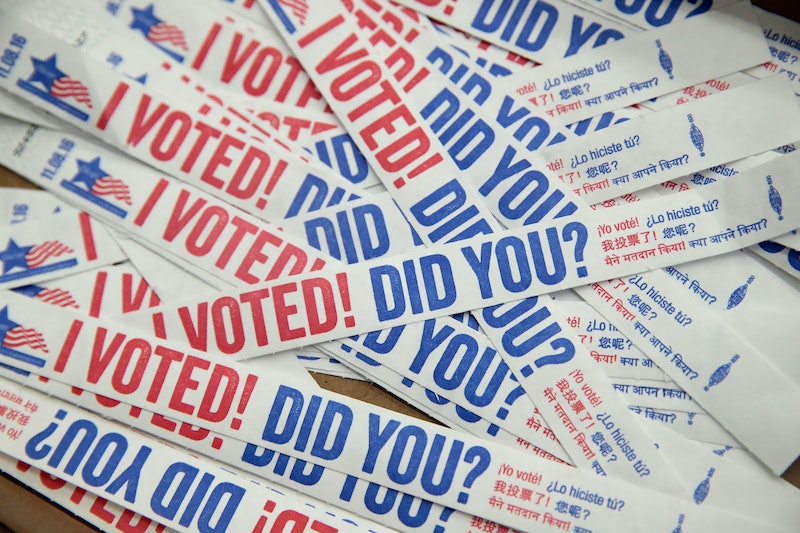 Early in-person voting opened up in Georgia on Monday, and people are already waiting in long lines to have their voices heard. If you think you might hear cheering in the distance, it could be the Democratic camp celebrating in advance — they consider high voter turnout in Georgia key to beating Donald Trump.

Most people consider Georgia to be solidly Republican territory. The last time Georgia voted for the Democratic candidate was in 1992 for Bill Clinton, and that was the only presidential election of the last six in which the Democrats scored a majority of the state's electoral votes. This year, however, Georgia polling reveals a tighter race than the Republicans may be comfortable with. Many of the polls have Trump winning by a percentage that falls into the margin of error, and a few even indicate that Clinton could win. In a state that Mitt Romney won by 7.3 points, this is a promising sign — and high turnout in the early voting stage in general is particularly promising for Democrats.

In the tightly fought swing states, some of which are habitually decided by margins of only tens of thousands, early voting can give one party an edge that the other can't make up even with a high turnout on election day. This helped Mitt Romney win North Carolina in 2012. This year, however, more Democrats have requested mail-in ballots than Republicans. Analysts often point to North Carolina as one of the few must-win swing states for Trump. No Democrat, on the other hand, would have expected that Georgia was even in play — but that could change this year.

High turnout generally helps the Democratic party. Many groups that are less likely to vote, like minorities and young people, are much more likely to vote Democratic, so Hillary Clinton's campaign is all about getting out the vote. In this election, in which Trump has spent so much of his time insulting one group or another, this is more important than ever. If the groups Trump has insulted — immigrants, journalists, and, of course, women — came out in full force to vote against him, Clinton would have an unbeatable coalition.

She certainly won't get all of those people, but it's at least very likely that more people will turn out to vote than usual. Georgia is a good example of that, as early voter turnout there has been extraordinarily high. Those who would like to keep Trump out of office, however, had better not get complacent. Early voting is a good sign for Clinton, but Election Day itself will also bring out masses of people.

Whether you want to try to avoid the lines and vote now or wait until the day of and experience all of the madness and chaos that it's sure to bring, the most important thing is that you let your voice be heard. It's necessary to remember that all of this campaigning and mudslinging really boils down to one thing: getting a higher number of votes.