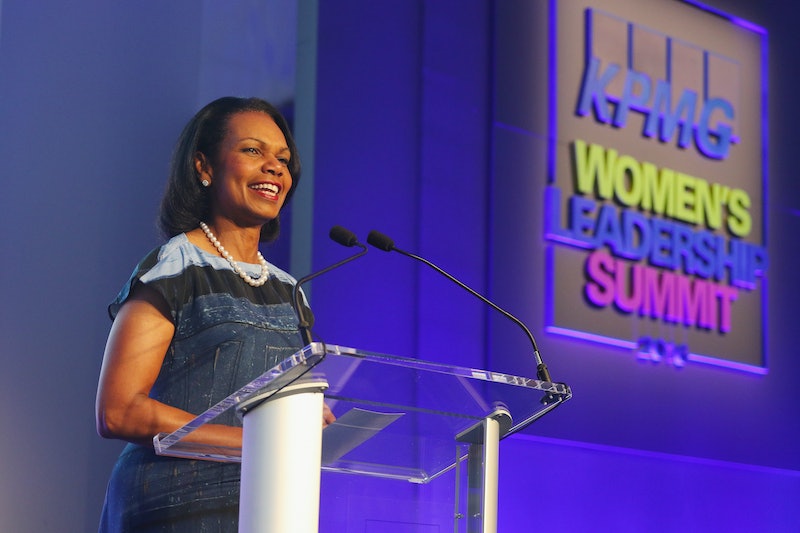 Condoleezza Rice is, first and foremost, a diplomat. It's natural to expect diplomatic words and composure from a woman who spent four years conducting the United States' most important foreign policy dealings, and it's refreshing in the political climate that America is experiencing at the moment. Still: Condoleezza's Rice's response to Donald Trump's comments about her from a decade ago really couldn't have come soon enough.

Back in 2006, Trump criticized Rice in a speech, saying that he "[wished] she was a bitch ... I want someone that can go and make deals". He returned to these remarks in 2007, defending them by going into greater depth about his belief that "she doesn't make any deals". While Trump himself didn't make a comment about these most recently re-discovered comments, Rice's response was short and to the point: "Exactly. Can't wait until November 9!"

This wasn't Rice's first shot at Trump. She made plenty of enemies among Trump supporters in October, when she called for Trump to withdraw in a Facebook post. A number of commenters on the post supported her, but many of the loudest voices condemned her for being part of the establishment, bowing to political correctness, encouraging a vote for "the criminal and liar Hillary". Rice has chosen to remain out of the fray since then, not posting any other comments on the matter.

Rice's comments are important not just because she's yet another formerly high ranking Republican leader who's against Trump, but also because she has a loyal following of people who wished that she would run for president herself. Rice remained popular throughout her tenure in the Bush administration, a feat that not many were able to pull off by the end of it. For the people who generally lean Republican but are put off by Trump's erratic behavior, her voice could be a major convincing factor in such a tense election.

Now, she's offering her take on this year's election in typical diplomatic form, only saying that Trump should not be president. Importantly, Rice has not endorsed Clinton for president — but given her feelings on Clinton's opponent, it's entirely possible that she could turn out to be one of the many prominent Republicans voting for Clinton. Her refusal to support Trump, her party's current standard bearer, is a message that needs to come through loud and clear while people still have time to make their voting decisions. Trump's words from 2006, because they pulled out even a small comment from Rice, could end up acting as another gift to the Clinton campaign — just in time.