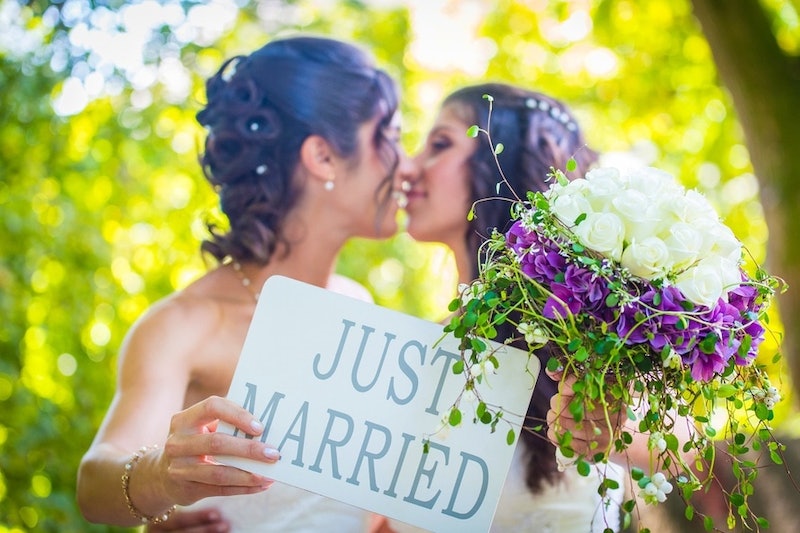 Because we have a tendency to live in and interact with echo chambers — people with the same views and opinions we have — it can be easy to forget just how different certain beliefs can be... or just pretend they aren't happening completely. But a new survey shows a global look at the attitudes toward the queer community, and it's an enlightening look at views around the world. Only one in three people worldwide support same-sex marriage, while 45 percent said it should not be legal, according to the survey, conducted by the International Lesbian, Gay, Bisexual, Trans and Intersex Association in cooperation with the Canadian technology company RIWI Corporation. The survey consisted of 31 questions and was filled out by 96,331 people around the world. What's especially important about the data gathered here is that it was from 65 countries — including areas where there is open hostility and discrimination against the queer community. It's an important reminder of how far there is to go in the fight for equality.

“The primary significance is that we have evidence and not anecdote: we now KNOW attitudes in States, we are no longer relying on anecdotal expectancies about what people in liberal and conservative countries think about LGBTI people," Aengus Carroll, researcher and co-author of The Personal and the Political: Attitudes towards LGBTI People around the World tells Bustle. "This is hugely important, and as a longitudinal survey it gives us a way to identify trends in attitudes: as we know there is a revival of conservative approaches to sexuality and gender in various parts of the world, and often the demand for recognition and human rights for LGBTI people is presented by politicians and religious leaders as 'new rights' or 'gay rights', while what is being asked for is recognition of human rights."

Having this data also holds a huge significance for future change. "This survey gives activists evidence to support all the other sets of evidence that they may be bringing before their populations, governments or at regional or international human rights and development spaces (such as the UN). There is a vast lack of documentation about LGBTI people and attitudes towards them — this is an innovative technology that is trying to address that, and ILGA is particularly well placed to do that work."

It's really important stuff. And beyond gay marriage, some of the other findings were just as surprising. There's what they found about views toward the queer community worldwide:

1. Less Than Half Of People Know A Queer Person

This totally blew my mind, although I guess I hadn't considered the lack of acceptance of queer folk in certain areas of the world. Only 46 percent of people worldwide know a gay, lesbian, or bisexual while 28 percent know someone transgender. This is bad news, because knowing someone personally is a good step towards general acceptance.

2. Over A Quarter Of People Think Same-Sex Marriage Should Be Criminalized

While only 38 percent of people felt that that adults should be allowed to have private, consensual same-sex relationships that changed when it came to a legal question. "When extending the question to a matter of law (‘Should being lesbian, gay, bisexual, trans or intersex be a crime?’), it is seen that only 26 percent feel that such behaviors or expressions should be criminalized," The ILGA explained.

That number is far, far too high. The idea that less than 40 percent of people think it's OK— and over one in four think it should be a crime — should be taken as a sign of just how much prejudice is still out there.

3. But Most People Wouldn't Mind A Gay Neighbor

Weirdly, considering the depressing numbers above, 65 percent said they would have "no concerns" if they had a gay neighbor. Now, obviously I wish that number was higher, but it was way more accepting than some of the other questions, so at least most people are realizing there's no threat to them from gay people. Carroll explains that this "was a really happy surprise and flies in the face of the rhetoric of people who agitate against LGBTI equality."

Queer rights and safety are about much more than same-sex marriage, but the lack of support for gay marriage worldwide, combined with a dearth of awareness, exposure, and compassion, shows that on the international scale there is still much to be done. "As activists and as an organization that helps fight for justice against some truly terrible things done against our communities around the world, the overall sensation is that this is largely positive and this information, even where bad, tells us things we need to know in our ongoing fight," Carroll says.

It's good to know that it's not as bad as some might have worried, but there is still a lot of work to be done. We need to remember this is a worldwide problem and focus on next steps.