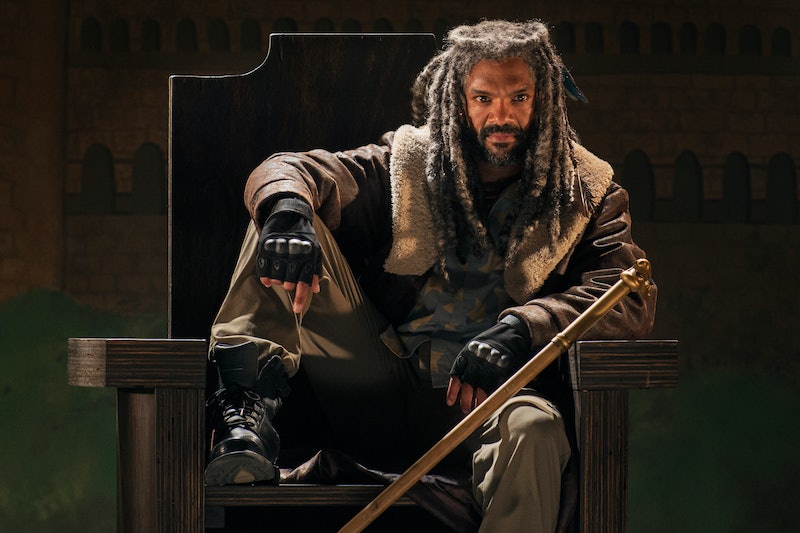 While I'm anxious to finally find out who Negan kills, I'm actually way more excited for the introduction of a new community called The Kingdom in The Walking Dead Season 7. The previews released since the Season 6 finale have revealed a ton of clues for what's to come this season, but also gave major clues that we'll be meeting this new crowd along with their leader and his pet. In the comics The Walking Dead is based on, The Kingdom is one of three major settlements, along with Hilltop Colony and Alexandria. If the AMC series follows the storyline from the comics, once we meet all of the people who inhabit these communities, a war will be brewing — and it will be a big one, likely to span multiple seasons. In the long run, the season premiere's big death may be the least of our concerns.

Of course, everyone involved in The Walking Dead has been keeping quiet about the new season, but in an interview with Den of Geek, Melissa McBride spilled some details about the Kingdom. “The Kingdom is a really cool set,” she said. “The set design and set decoration is just really, really creative over there. The Kingdomites, they've got it going on! It's a very interesting place, interesting characters, and of course, there's King Ezekiel. I'm excited that the fans are going to get to see him, finally.”

If that isn't enough for you, here's what the comics reveal about the Kingdom, which means potential spoilers for The Walking Dead Season 7 ahead.

The Kingdom Is Located At A High School

Ezekiel and his group have set up camp at a local D.C. high school and surrounded the school with a wall of buses and sheets of metal. It’s the second biggest settlement next to Hilltop Colony and boasts a pretty big population. In the comics, the residents live inside the school in the winter and outside in tents during the summer. Honestly, it seems like the best location we’ve seen thus far, especially since Alexandria was destroyed last season.

Ezekiel Is Running The Show

Remember when everyone was like, “Oh no, Negan is coming!”? Ezekiel should receive the exact opposite reaction. He is calm and very level-headed when it comes to making decisions and leading his group, which is why he’s deeply respected and pretty much exactly what Rick and his group need to get back on track.

On The Walking Dead, Khary Payton will play Ezekiel and told Entertainment Weekly about the character:

"He’s in the business of not losing himself to his surroundings. I don’t let things get me down. I brighten the things around me in that it’s a party when you’re going to be around him, and whether it was a party there before it’ll be a party by the time he leaves."

And He Has A Pet Tiger

You want to intimidate people? Get a tiger and call it a day. I would love to know how someone in D.C. just happens to casually own a tiger. I also can’t wait for Shiva the tiger to take out some walkers.

They Work With Hilltop And Alexandria

Hilltop and The Kingdom are already in the trade business together. Once Paul brings Rick to Ezekiel, the three of them are instantly allies and end up working together to bring down the Saviors and find a way to survive.

Michonne Could Play A Key Role

In the comics, Michonne actually dates Ezekiel, but since she and Rick are now together in the show, I think this is one plotline that won't be adapted for TV. However, that doesn't mean her most important connection to the Kingdom won't happen — in the comics, Michonne moves to The Kingdom and takes on a leadership position there.

They Hate Negan Too

Welcome to the club, Kingdom.