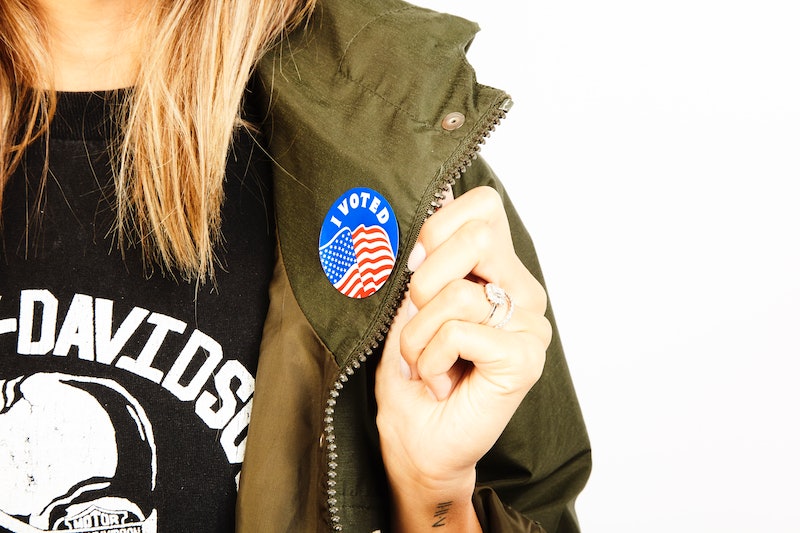 The race to choose the next President of the United States is finally in its home stretch, but judging from the total lack of enthusiasm on the part of most Americans, voter fatigue is a real problem. Someone who lives outside of a swing state may be counting their reasons to vote in the 2016 election and coming up short; we’ve all heard the bitter assertion that your vote doesn’t “count” when you’re the political minority in your area. Republican presidential nominee Donald Trump has played on this fear — that the election’s outcome is inevitable — throughout his entire campaign, claiming repeatedly that the election is “rigged” to block his road to the White House. (Spoiler alert: It's not. Here's why.) While it may come across as an attempt to save face from a man whose political campaign is imploding, nearly a third of Americans seem to agree: According to an Associated Press survey, three in 10 citizens have little to no faith that votes are accurately counted.

So does your vote actually matter? The short answer is a resounding yes. Life isn’t an episode of House of Cards, and the only way your vote doesn’t count is if you fail to show up to the polls. Considering how close some presidential elections have been, assuming your favored candidate will win makes as much sense as trusting your peers in a group project — that is to say, no sense at all, and everyone ends up grumpy and embarrassed.

In recent history, there are three major presidential elections that were decided by a razor-thin margin. The most famous is the race between Democratic nominee John F. Kennedy and incumbent Republican Vice President Richard Nixon. After a long campaign trail that included the first televised presidential debate, Kennedy eked out a victory with 113,000 votes. It sounds like a substantial total, but 68 million ballots were cast — Kennedy won the popular vote by less than one percent. The electoral college results weren’t quite that narrow; Kennedy received 303 votes, and Nixon 219. However, it’s still remembered as one of the closest elections in American history, and it’s safe to assume that if some voters had stayed home that year, or if different citizens had shown up, the results may have gone differently.

Then there’s the 2000 presidential race, in which Democratic nominee Al Gore actually won the popular vote by 0.5 percent, but lost the electoral vote to George W. Bush. After a protracted recount, Gore eventually conceded the presidency to Bush.

The 2000 election is where many disenfranchised voters point to illustrate their apathy. After all, they say, what’s the point of voting when the popular opinion doesn’t elect the president? But here’s the thing: A state’s electoral college virtually always awards its votes to the candidate who won the popular vote, and as Slate points out, the Gore-Bush kerfuffle was the first of its kind since 1888. Would you rather stay home and complain about the results of the election or actually get out and make sure the electoral college knows which way you’re casting your vote?

Another common argument against voting is that only swing states matter. Although it’s true that some states can usually be counted to vote one way or another, the 2016 election has turned everything on its head, including the typical swing states. Earlier this month, the New York Times reported that some conservative states have become “realistic targets” for Hillary Clinton’s campaign — namely, Georgia and Arizona, both of which usually lean staunchly conservative. Aside from siding with Bill Clinton in 1996, Arizona has voted Republican in every presidential election since 1952. On Oct. 19, however, Hillary was maintaining a five point lead over Trump in Arizona. The upcoming election has proven unpredictable again and again, and no matter your political affiliation, you can’t count on other people to vote the way you expect.

Unfortunately, the likelihood of people actually turning out to vote is fairly low. According to the Organization for Economic Cooperation and Development (OECD), voter turnout in the United States lags far behind other developed democracies. Out of the 35 countries in the organization, the United States places a dismal 31st. Turnout hit a 40-year high in 2008, but four years later, it dropped to just 53.6 percent of the voting age population — 46 percent of possible voters didn’t actually vote. Millennials in particular are an untapped political force. This spring, they became the largest generation in America, but in 2012, just 41 percent of Americans between the ages of 18 and 24 voted in the presidential election.

To be fair, certain voting barriers can impede access to the polls. Some states have stringent identification requirements that often edge out minority populations, and earlier this year, many Arizona polls had absurdly long lines, partly because only citizens registered with recognized parties were able to vote. In 2013, the Supreme Court rules that states are able to draft their own voting laws, and the decision has had some hiccups in the ensuing years. But these restrictions were put in place by people that had been voted into office, and the fastest way to make a difference is electing someone who would repeal such restrictions. If you’re restricted from voting, make sure other people exercise their own right.

It’s easy to complain about politics, and it’s especially tempting to blame everything on other people. But voting is one of the most basic ways to create real change — it doesn’t make sense to rail against the legislation enacted by baby boomers if you didn’t try to vote into office someone you support. Hypocrites are no fun at parties (or elsewhere), and even if your favored candidate loses an election, your vote took away from the other politician’s victory and possibly paved the way for a future win. Even if the 2016 election hadn’t been as spectacularly unpredictable as it’s turned out to be, your vote matters.

Besides, do you really want to be the only person without an “I Voted” sticker to post on Facebook on Election Day? I didn’t think so.

More like this
The Spiritual Meaning Of Angel Number 666, Explained
By Brittany Beringer
Angel Number 333 Is All About Self-Love & Alignment
By Brittany Beringer and Kristine Fellizar
26 Ghost Story Podcasts To Get You Ready For Halloween
By Jessica Booth, Mia Mercado, JR Thorpe and Emma Carey
October's Astrology Includes Mars Retrograde & A Solar Eclipse
By Nina Kahn
Get Even More From Bustle — Sign Up For The Newsletter