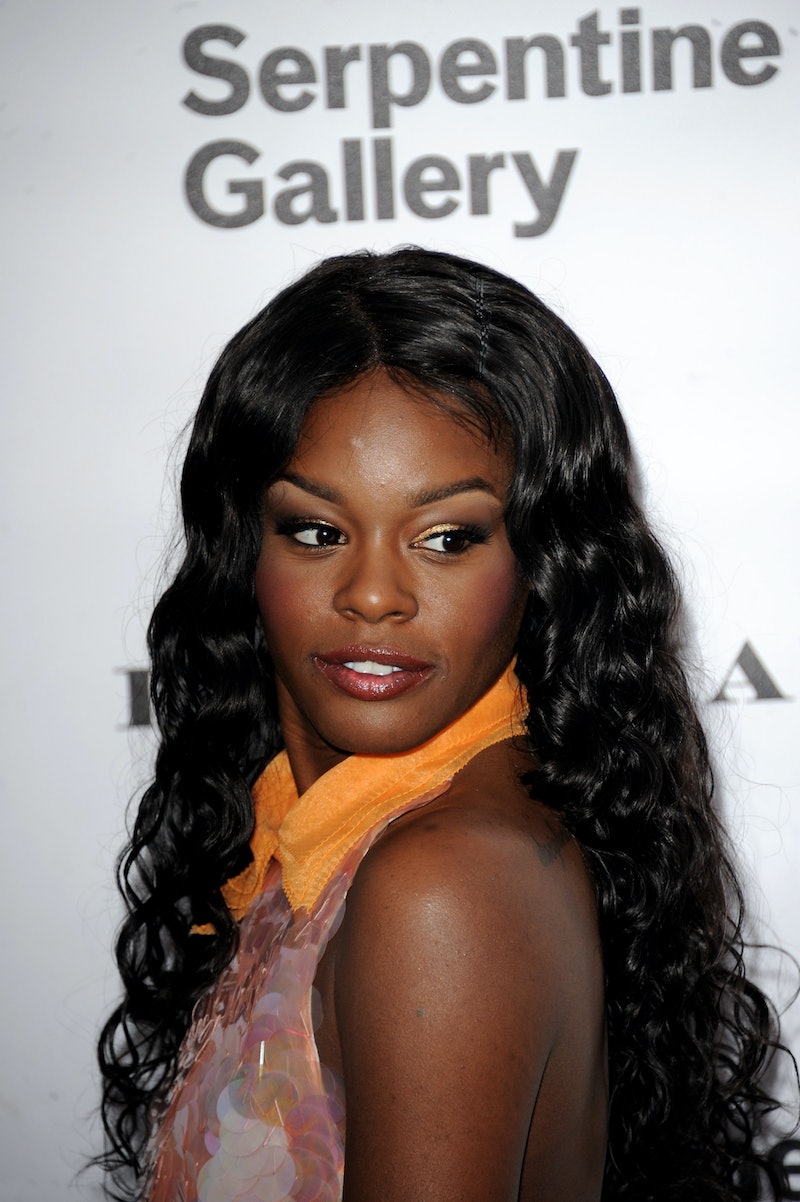 On Monday, news broke of an alleged altercation between Azealia Banks and Russell Crowe at the Beverly Hills Hotel on Saturday, Oct. 15. Now, Azealia Banks is speaking about the alleged fight with Crowe. In an interview with The Sun, the rapper said, "I think he’s a racist, misogynist pig. This is a stain on me. My ­femininity feels stained. I feel stained as a woman, I feel mishandled, I feel mistreated, I feel dirty. I feel very f*cking low."

Banks claims she was invited to Crowe's party in his hotel room by Wu-Tang Clan rapper RZA. "Russell had moonshine on the table, and then Russell calls for whisky, so then they just start mixing them up," the 25-year-old rapper claims. "You know, moonshine, whisky, vodka, and smoking cigarettes and smoking weed." Soon enough, Banks claims she and Crowe started getting flirty. "Russell and I get next to each other. He’s talking to me, I’m talking to him, and we start flirting. We’re having a really good time. He’s got his knee on my knee, he’s touching my leg, I’m playing him my music, he tweets my song The Big Big Beat." She claims he even told her, "He's like, 'I love this, you’re ­beautiful, this is great.'"

Per Banks, things allegedly went from great to bad when she mocked someone at the party. "Russell just kind of switched," she claimed. "He was like, 'Well you know what? You’re young and you’ve never done anything in your career so you don’t know what you’re ­talking about.'" She claims she tried "keeping it light" by saying, "Your best days are behind you." Then, the rapper claims another woman began defending Crowe and Banks claims she responded with, "I said, 'Girl, this is not the right time or place for us to be fighting, like what would happen if I got up and I slapped the sh*t out of you, or I took a glass and f*cking threw it at you and you were bleeding all over the place? I would be wrong and we’d all be wrong, and the party would be done.'"

This is when Banks claimed the Oscar-winning actor allegedly stepped in and threw a racial slur at her: "Then Russell turns to me and he goes, 'Well, you wouldn’t even get close enough to get the chance, n*gger.' And he says the word n*gger so, like, quietly, under his breath." She also alleges that he grabbed her, picked her up, choked her by the throat, threw her out of the room, and then spit on her. "You don’t just spit on somebody. And in front of everybody."

After the alleged incident, Banks filed a police report against Crowe, her rep confirmed to Bustle Monday. Bustle has also reached out to Crowe's rep about the reported hotel fight, Banks' The Sun interview, and her filing of a police report, but has yet to receive a response. Her rep, Raymani, released the following statement to Bustle Monday:

"Azealia is not ready to speak out on the incident but she will be in a day or two, once she has had time to process what happened. Most of the details that have surfaced so far are fictitious and Azealia looks forward to sharing the truth once she has had a time to deal with the trauma."

Crowe has yet to comment, but writer and actor Jim Jeffries who was also at the party Saturday has. In response to a story about the alleged incident tweeted by TMZ, Jeffries claimed, "This is 100 percent the truth. I was there, she was out of control. Russell did absolutely nothing wrong." He also alleged, "Azelia Banks is a complete liar. I was in the room. Russell Crowe is completely innocent. I would take a lie detector. [sic]"

For his part, Crowe retweeted the following TMZ story:

The Sun also spoke with Sgt. Todd Withers of the Beverly Hills Police Department who said, "There is a police report involving both parties — Azealia Banks and Russell Crowe. The report that was taken was an allegation of battery. It was made on Sunday and the case is now pending detective follow-up. It will be assigned to a detective and both parties will need to be spoken to."