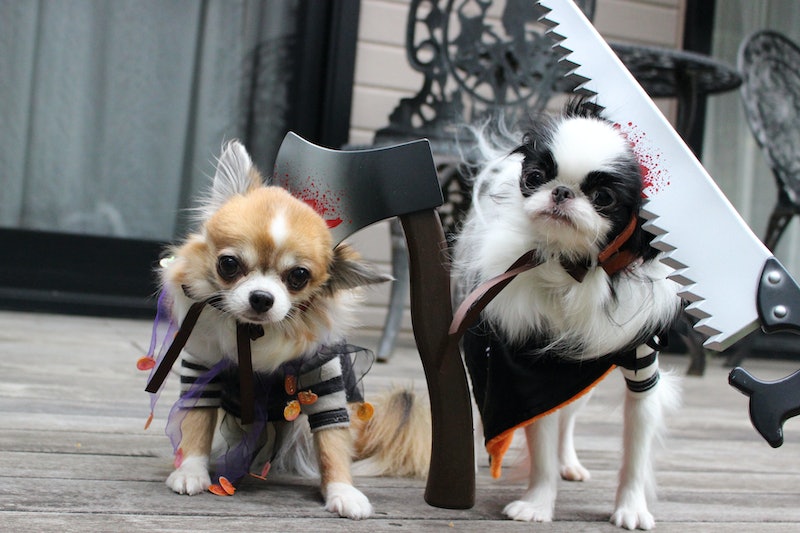 Though it's arguably one of the best parts of Halloween, face it: You probably don't know why people dress up for Halloween. While the tradition is amusing (and it wouldn't be Halloween without some face paint and felt) it's definitely a bit strange. I mean, besides utilizing a few colors, there's no other holiday we so fully change our attire for, to the point where we're pretending to be someone (or something) we're not. In fact, if you sit back and think hard about it, Halloween is a pretty ridiculous holiday. Perhaps that's why so many people simply can't wait for the season to get started.

The answer, unsurprisingly, is rather complex. As with most holidays, Halloween got its start a long time ago — in fact, it's been dated back to the Iron Age and the Celtic holiday of Samhain: In short, according to Livescience, they believed there was a specific day spirits passed over into the next realm. Oct. 31 made sense, since it was the last day of the Celtic calendar before winter, which typically killed off the crops and nature in general. As for why a lot of Halloween decor is a bit haunting in nature — that can be traced back to the fact that Oct. 31 was once a day to both honor spirits, and ward off the less-than-desirable ones.

This can explain why many of the costumes we wear are on the spooky side. Back then, most people dressed in super scary costumes to honor the tradition and to also scare away demonic spirits. Though this practice has morphed into something entirely new (when was the last time you saw a truly scary costume?), it does explain a lot.

As for when people began really dressing up to celebrate Halloween as the holiday it is now, it actually started in County Cork, Ireland. The Scottish also participated, but, according to TechTimes, they called it "guising." While traditions varied, one thing was for sure — the holiday was all about spirits, and the costumes ran parallel with that idea.

Costumes began to morph into what they are now back in the '20s, thanks to companies like Collegeville Flag and Manufacturing Company. This company realized that Halloween costumes could be anything we imagined, not just scary stuff. Around that same time, H. Halpern Company had the same idea, and started seeking licensing rights for popular cartoon characters at that time. The man credited for changing the game was named Ben Cooper: He tried to license characters well before they became big. He became the king of Halloween by 1960, and all pop culture-related costumes hit shelves faster than you could imagine, all thanks to him.

Before you dress up this year, think about how much Halloween has changed since it first got started. And if you're still strapped for ideas, maybe use a sheet and go as a ghost to honor the past.