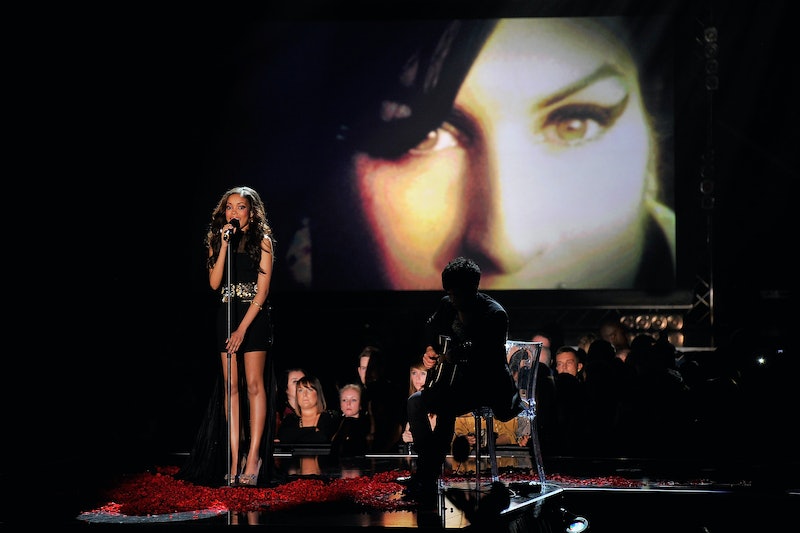 Amy Winehouse in concert with Flo Rida, anyone? No, the time machine still hasn't been invented, but thanks to Alki David, who's evidently gunning for the title of "King of Holograms," the late singer just might be coming to a stage near you--in hologram form, that is. David recently sued Cirque du Soleil and MGM Resorts, claiming that he owns the licensing rights to hologram technology used in the Michael Jackson One show and plans to use his exclusive technique to bring other late celebrities back to the stage.

As an avid Winehouse fan, seeing her best live performances in person would've been awesome. And like a ton of other folks, I was excited when Dr. Dre and Snoop Dogg "revived" Tupac during the 2012 Coachella Music Festival. But then I thought, do we really want to see a slew of late celebs brought back from the other side? Although the idea of a virtual Winehouse in concert sounds tempting, something about routinely rocking out to the hologram of a celebrity who's no longer with us is still kind of creepy.

Maybe celebrities could use holograms to bring back the good ole days. Think of the performer you were too young, too broke or too far away to see in concert during their heyday. And since not everyone's a millionaire with money to burn or a spoiled brat from My Super Sweet 16 who can afford to pay a celebrity to make a personal appearance, there could certainly be a market for celebrity holograms. Maybe then the appearances wouldn't cost the same as a four-year college tuition. It's definitely a unique experience and the talent would still be present--kind of.Plus, it was pretty cool when Will.i.am did it during the 2008 election, and many others have since followed suit. Even though I'm still on the fence about some of David's proposed hologram performances, here's to hoping that they won't be largely restricted for the purposes of celebrity resurrection.