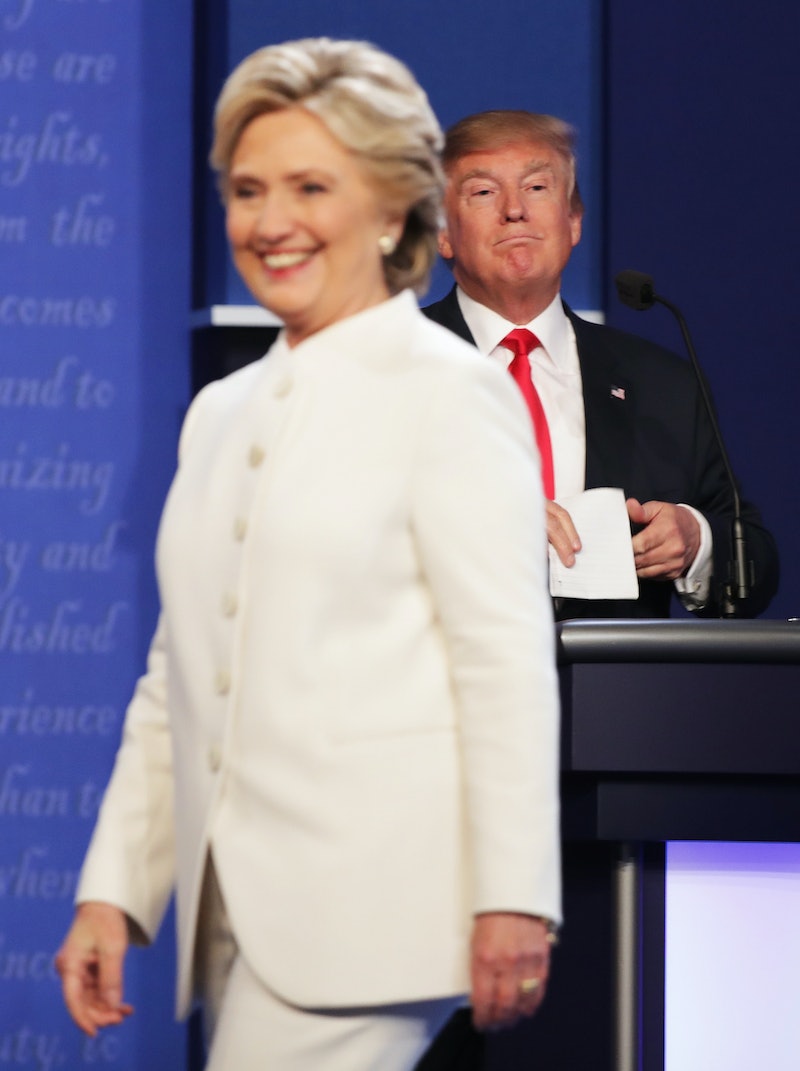 Are you now, or have you ever been, categorized as a "nasty woman?" That's the latest bizarre, sexist turn of phrase Donald Trump used in the third presidential debate to try to tarnish Hillary Clinton's reputation, and it sounded familiar to me. Anyone else? Have you ever called a man out for being totally, utterly, absurdly wrong about something — like, so wrong it was obvious he wasn't even trying to not be wrong, and was possibly even kind of getting off a little bit on how wrong he was — and been told that you were "such a nasty woman" or some other descriptor which implied that you were foul, angry, or some kind of human hemorrhoid? Have you ever been told that you were rude, unkind, or offensive because you didn't put a man's feelings before your own in literally any situation?

Ha ha, just kidding — of course you have! If you're a woman, you've been told that it's a character flaw to ever state a very obvious fact about a man that paints him in a negative light (and if you're a woman who spends a lot of time online, you've already been told this 19 times today). Trump's jump aboard the "nasty" train makes perfect sense. Over the course of his battle with Clinton for the presidency, it feels like he's done a grand tour of every kind of misogyny there is, from braying about his entitlement to commit sexual assault to implying that Clinton is not hot enough to become president. So naturally, there was no where to go but Nastytown.

And I must admit, Trump was effective by one measure. There is a certain sting to "nasty." "Nasty" isn't as easy to dismiss as a vulgar insult, or some disparagement that you know to be untrue. "Nasty" says you're committing the worst crime any woman in our society can commit: you're making people think you're unkind. That's different than actually being unkind, of course — "nasty" is all about perception. You could spend all day devoting your life to public service (you know, like Hillary Clinton does), but inform one guy that you know that he didn't pay his taxes for almost two decades, and suddenly none of it is supposed to count. Suddenly, you're "nasty."

I've been called a lot of worse things in my life than "nasty." Like Hillary Clinton and every other woman in the world who doesn't suffer fools gladly, I've been called the "B word," the "C word," the "S word," and even some more exotic ones, like the "Z word," the "2 word," and the "triangle-peace-sign-ghost-emoji word." I was called an unprintable slur for female genitals just the other day for waking up some guy on the subway who had been sleep-manspreading.

And I have to say, at the risk of sounding cliché, I'm proud of it all. I'm proud of my nastiness. Because do you know what "nasty" means? It means that I speak up when I see something that I think is wrong, even if I know it will make some people think that I am a jerk because their lives would have been easier if I had kept quiet. It means that I don't swallow my words when I know they need to be said, even if said words will make someone think I'm not a "good" woman. Because I'm not a good woman. I'm a fucking nasty woman. And I love it.

Guess who else loves it? My friends, family, and random strangers who have benefited from my willingness to call out bullshit. And even still, I could be nastier. I aspire to be nastier — because there are still times when I let the crap that guys like Donald Trump say slide, because I just feel exhausted and I don't want to deal with an hour of some internet diaper baby baby tweeting nonsense pictures of American flags and death threats and sonograms at me. I wish I could be nasty all the time. I wish all the women of the world could be nasty all the time. I wish I could start an after-school program to help middle school girls lean in to their nastiness. Because when men like Donald Trump think we are nasty — when sexist, old-fashioned bigots who want to use sexist, old-fashioned words to dress us down, tell us we can't play by their rules, push us away from the things we have earned just because they feel entitled to them — we're on the right path.

So, friend, I hope you do something nasty today. Demand to be paid what you're worth! Correct a sexist! Call out a dude who thinks his balls need to take up three seat on the bus at rush hour! Refuse to let someone bully you and then convince you that accepting bullying is the polite, ladylike thing to do. Because being ladylike is a cage. And being willing to be nasty is the only key.

More like this
25 Inspiring Quotes From Black Women To Celebrate Black History Month
By Kyli Rodriguez-Cayro and JR Thorpe
Watch Jacinda Arden’s Devastatingly Honest Resignation Speech
By Sam Ramsden
24 History-Making Black Women You Probably Didn't Learn About In School
By Ayana Lage and JR Thorpe
Here’s Your Daily Horoscope For January 27, 2023
By Mecca Woods
Get Even More From Bustle — Sign Up For The Newsletter
From hair trends to relationship advice, our daily newsletter has everything you need to sound like a person who’s on TikTok, even if you aren’t.