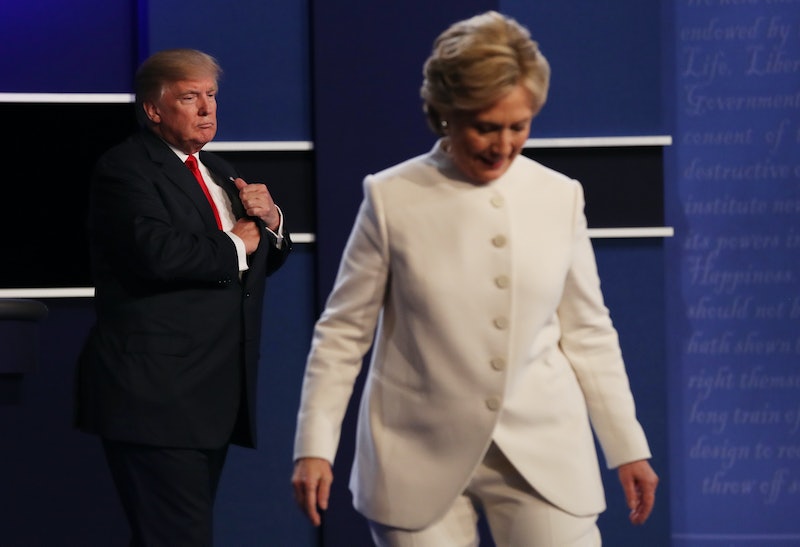 The debates may be over, but Clinton and Trump seem less united than ever. Unsurprisingly, the final presidential debate did not end with much camaraderie between the two candidates — in fact, Clinton and Trump did not shake hands at the beginning or at the end of the debate on Wednesday night. After the two presidential candidates shook hands at the previous two debates, there was much speculation as to whether or not a handshake would conclude the final debate, but both Clinton and Trump made it pretty clear that they had no interest in a post-debate handshake this time around.

As soon as the closing statements concluded, Clinton left her podium to shake hands with moderator, Chris Wallace — Trump stayed behind his podium until the exchange was over, ensuring that he and Clinton would not have to meet on stage. While Trump (rather gloweringly) exchanged a handshake with Wallace, Clinton walked to the front of the stage to happily greet the audience. Thus, one of the most speculated-about handshakes in American political history never came to be.

Clinton and Trump did not begin the second debate with a handshake, either; however, they did meet and shake at the conclusion of debate number two. Clearly, on Wednesday night the candidates felt too divided for such a gesture.

The lack of handshake should not come as a surprise. In fact, it might have seemed rather bizarre for Clinton and Trump to share a handshake after the conclusion of such a contentious final debate. The New York Times reported that during the debate the candidates disagreed on issues from abortion rights to gun control to the national debt — often the candidates talked over each other, and Trump didn't hesitate to interject the occasional "wrong" when Clinton spoke. Additionally, to make the night even more contentious, when asked whether or not he really thought the election would be rigged (as he recently alleged) Trump said he would have to wait and see on November 8.

Clinton and Trump did not make any pretense of conviviality on Wednesday night. However, not only did the two candidates share opposing policy plans, Clinton and Trump also made it clear that they did approve of their opponent personally, either. According to NPR, towards the end of the debate, Trump called Clinton a "nasty woman," and earlier on, Clinton said she agreed with Bernie Sanders' comment that Trump is the most "dangerous person to run for president in the modern history of America."

Yes, after a debate like that, a handshake simply would not have made any sense.