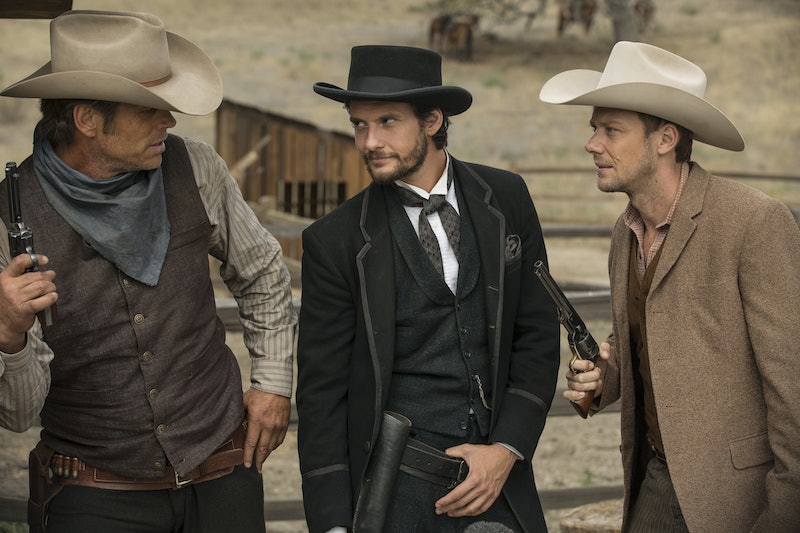 The titular theme park at the center of Westworld walks the fine line of having to provide safety to its customers while creating the illusion that they are actually in danger. Bullets in Westworld may be rigged to not kill guests, but that doesn't make staring down the barrel of a gun particularly enticing. Hosts are programmed to cause no harm to a living thing – yet the engineers seem to be worried that a robot could suffer a major glitch and hurt one of the guests. Now, there's actually proof that guests can die in Westworld, which means it's almost guaranteed to happen again.

The official Westworld website, owned by the fictional Delos Destinations company, claims, "Statistically speaking, you are more likely to die from lightning strike than to die while in a Delos park." However, while death is unlikely, the site provides a comprehensive list of previous causes of death that have occurred within the park — without revealing the number of people who have died in the park's past. Delos Destinations also reminds potential visitors that "You absolve Delos, Inc. of any wrongdoing if you or anyone in your party suffers bodily harm while using The Service, and you agree to not sue or prosecute Delos, Inc. or any of the smaller entities falling under the Delos Corporation." So if you trip off a cliff, don't think a good lawyer is gonna be able to help you out. It's best to be safe in Westworld, so here's the full list of previous causes of death in the park that any future visitors should be wary of.

The animals in Westworld are all hosts (flies excluded), but it sounds like that's not enough to protect guests from an angry herd of Buffalo. That, or the engineers of Westworld learned their lesson the hard way with real Buffalo, creating an unavoidable Lion King situation.

Yikes. Probably the result of a lost guest or someone who got themselves trapped, self-cannibalism really feels like something you would try to hide if possible. It's good to know that Delos Destinations is a transparent corporation, though.

Probably the result of a narrative gone too far, or a chair/box holding up a possible hangee breaking before the hosts found a way to remove the guest from danger.

Drowning sounds like a far more likely culprit of guest fatalities of Westworld, but the question here is, where exactly are people drowning in the middle of the desert? Are these leisurely swims that have gone wrong or a bathtub accident?

With no other type of heat, fires are a frequent presence in Westworld, whether for cooking or keeping warm around a camp. Accidents happen, and this is likely the result of a slip-and-fall near an open flame.

Many guests seems to travel to Westworld for sexual gratification – and judging by the mention of Autoerotic Asphyxiation amongst causes of death, some of the guests have specific fantasies they intend to play out. Surely after this incident, hosts were programmed with a CPR protocol, at the very least.

The most recent episode of Westworld features a host destroying itself via a rock to the head, and there's nothing to stop a guest from suffering the same fate. Even Westworld isn't immune to gravity, it seems.

It's not clear who would be sneaking plants into Westworld or why, but clearly there's an issue with deadly vegetation being brought into the park.

There are some beautiful mountains and views in Westworld. Unfortunately, those mountains don't come with guard rails. It's best to keep away from the edge when taking in the sights.

Y'know, as opposed to Uncommon or Rare manslaughter.

The website actually lists tumbleweeds as a cause of death in Westworld, which raises a lot of questions. Questions such as "Huh?" and "Wait, what?" and also "How, exactly?" I can understand if you want to Google "death by tumbleweed" in this moment, but I promise you there's nothing there because I have looked. Is "tumbleweed" a code? Should we be scared of the tumbleweeds? Is the "critical failure" that happened in Westworld 30 years ago the fault of an avalanche of tumbleweeds causing the entire park to suffer some sort of "Great Tumble"? There are a lot of questions in Westworld already, but surely the mysterious maze and the Man In Black's true identity can take a backseat to this.

Westworld explores humanity's thirst for danger and adventure — the stories that people try to craft for themselves to take control of their lives. Westworld, however, is not immune to the kind of freak accidents that cut many stories and lives short. There are already plenty of ways to die in the park, but it looks like guests won't just have to worry about heights anymore, because the robots could start fighting back at any moment. Of course, even the robots are surely no match for Westworld's greatest danger...

More like this
The ‘Squid Game’ Season 2 Renewal Teases A Creepy New Figure & A Return
By Brian Anthony Hernandez and Bustle Editors
Everything You Need To Remember Before Westworld Season 4
By Brad Witter
Why Simone Ashley Had To Study Snails For Intimacy Training, Pre-‘Bridgerton’
By Grace Wehniainen
The Umbrella Academy Cast Breaks Down That Wild Season 3 Finale
By Gretchen Smail
Get Even More From Bustle — Sign Up For The Newsletter