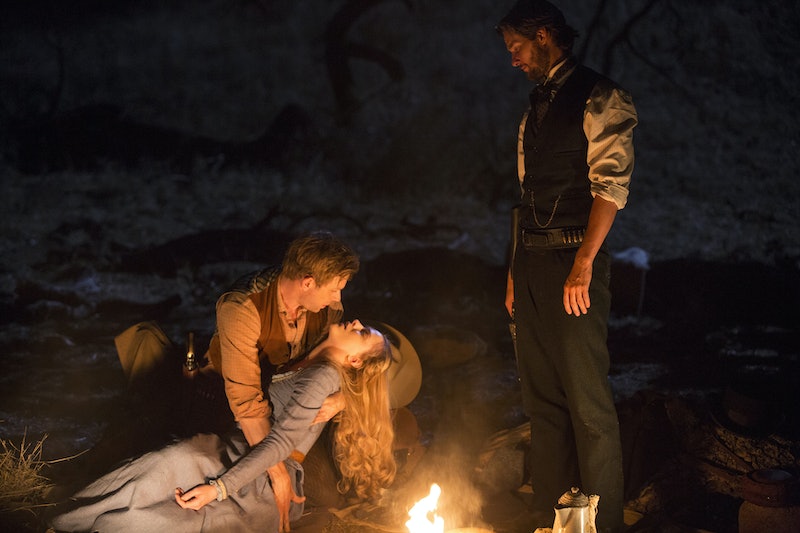 I don't think it would be grandiose to say that in the digital age, one of the most frequent lies that people tell is that they actually read and understood the terms and conditions of whatever service they are signing up for online. Life is just too short for that. However, the official Discover Westworld website may have been counting on that digital age habit, because the Westworld terms and conditions for guests reveal a lot about how the park actually works, and some of them are kind of terrifying.

One would hope that guests wealthy enough to visit Westworld have good enough lawyers, or sense enough to actually read the legalese before putting down a deposit. In case you were wondering, a pretty basic week's stay at Westworld will run you just over a million dollars. Granted, we don't know how to calculate for future inflation, but that's still a pretty penny. So, when you read through these terms, ask yourself if this trip is really worth your imaginary future fortune.

Some of the terms are pretty mild. They don't want you to create derivative works (fanfiction) about your experience, for example. This website has been online for about a month, so none of this is new information. However, now that the HBO series has started and the show has introduced this world in action, some of these terms now help flesh out the world, and lend credence to fan theories that are already brewing. Here are some of the most telling highlights.

Guests Can Die In The Park, And Have

You dissolve Delos, Inc. of any responsibility financial or criminal that would result from dismemberment, broken bones, heart failure, loss or loss of use of hand and foot digits, shock, marital and relational strife, child endangerment, psychological trauma, delusions or hallucinations resulting from the realistic nature of the park experience, and/or any other physical, emotional, and psychological effects resulting from strenuous park activities.

Statistically speaking, you are more likely to die from lightning strike than to die while in a Delos park. However, the following causes of accidental death have occurred within the Delos Destinations compound: buffalo stampede, self-cannibalism, accidental hanging, drowning, 3rd-degree burns, autoerotic asphyxiation, blunt force trauma, allergic reaction to non-native plant life, falling from great heights, common manslaughter, tumbleweeds. You absolve Delos, Inc. of any wrongdoing if you or anyone in your party suffers bodily harm while using The Service, and you agree to not sue or prosecute Delos, Inc. or any of the smaller entities falling under the Delos Corporation.

The great "how do you die by tumbleweed" mystery aside, this is quite revealing. While I can understand developing bullet technology that protects human, there are plenty of ways to die in the Old West. Another section of the Terms states that "Hosts utilize the Good SamaritanTM reflex," which along with Ashley and Elsie's conversation about weapons privileges in Episode 3, explains why the hosts are basically the least dangerous part of Westworld.

I also like that the park acknowledges non-physical dangers of participating in Westworld as well. The Man in Black alone proves the necessity of that clause.

Delos Is Prepared For Everything

Delos, Inc. shall not have a liability to you by reason of any delay or failure to perform if the delay or failure to perform is occasioned by circumstance beyond our control, which shall refer to any act of God, storm, fire, casualty, unanticipated work stoppage, power outage, satellite failure, strike, lockout, labor dispute, civil disturbance, riot, war, national emergency, Governmental action, Host malfunction, or other circumstance beyond our reasonable control.

This just begs the question — have all of these happened in the past?

Upon entering the Delos Destinations compound, you agree to voluntarily divest yourself of all cameras, cellular devices, and electronic technology capable of recording your park experience, including virtual reality recorders and devices, and holographic recreation devices. There is no video recording, audio recording, or written recording allowed within the park. You are allowed to utilize the in-park Host character PHOTOGRAPHERS, whose narratives allow for you to take Delos- approved photographs. These photographs will reflect the time period and location of the park narratives you are playing. No other photography is allowed.

This makes sense, and guests do get to keep pictures when they leave. We've already seen the havoc that one outside photo caused. This bit also gives me a sense of the outside world where Westworld takes place (unless there are multiple timelines). Virtual reality recorders and holographic recreation devices? No wonder guests crave the physical experience of this park!

How Long Can You Stay?

You agree that you will leave the Delos Destinations compound on your appointed leave date, and you will make no attempt to hide within the parks and avoid your leave date. A maximum of twenty-eight (28) days is allowed for being within the parks before guests must proceed to the Mesa Gold area for decompression. Any attempts to use the parks to avoid local, federal, or international court dates, jail or prison sentences, prosecution, or payments agreed upon in civil court or arbitration will not be supported by Delos, Inc.

While many of the hosts reset after sometimes as little as a single day, guests can stay for a maximum of four weeks. Interesting that, when William arrived, there was no orientation, but there is a decompression period. I absolutely would run away to Westworld to avoid prosecution, so that's a bummer. However, this clause is most important because of the Man in Black, who has stated on Westworld that he does not intend to leave the park. Will Delos intervene when his 28 days are up? You can do a lot a damage in that time...

Don't Give Them Any Ideas, Literally

Any ideas pitched to Delos, Inc. employees automatically become the property of Delos, Inc., in perpetuity.

Interesting to think that a guest suggestion, or a guest experience, could become a future host narrative. Isn't it?

You Can't Take It With You

You will not remove any food or beverage items, any Hosts, any clothing, any weapons or equipment, any signage, or any Host body parts from the compound.

So, I guess bringing Cowboy James Marsden home with you is frowned upon. That's a shame.

All human-on-human crimes taking place within the Delos Destinations compound will first be investigated by Delos, Inc.; Delos, Inc. has successfully avoided providing personal data in response to a legal process involving outside court entities for its entire history of existence. However, Delos, Inc. reserves the right to disclose personal information requested by a law enforcement agency, and shall have no liability to you for such disclosure.

An earlier clause warns that human-on-human crime "may" have to be reported to the local authorities, which doesn't sound all that threatening, but this explains it further. The fact that they have resolved all crimes internally and privately is fascinating, and potentially foreshadowing what's to come.

They're Definitely Gonna Clone You

By entering the Delos Destinations Port of Entry, you acknowledge that Delos, Inc. controls the rights to and remains the sole owner of, in perpetuity: all skin cells, bodily fluids, secretions, excretions, hair samples, saliva, sweat, blood, and any other bodily functions not listed here. Delos, Inc. reserves the right to use this property in any way, shape, or form in which the entity sees fit.

Or, at least, make a robot that looks like you. Are all of the hosts genetically based on former guests? To quote Hillary Clinton at the third presidential debate, that's... horrifying. Also, that's an insane human right to just sign away for the sake of a vacation. Are duels and legal prostitution really worth that?