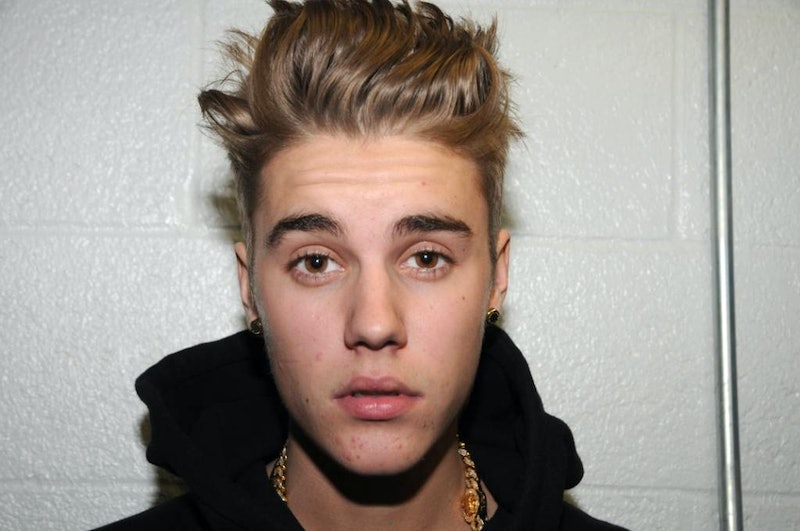 Justin Bieber's Instagram is a place of true wonder. It's full of selfies, shout outs to his ex-girlfriend, James Dean impressions, and a ton of tattoos. This is how we know that Justin Bieber got some new tattoos and that he's, like, so over them now. Bieber captioned one of the photos of his new ink, "Done with tats 4 a while... Where I wanna be.." I think this means that his sleeve looks the way he wants it to for now, but this is Justin Bieber. He loves tattoos and has a crap ton of money that he can't spend fast enough. I'm thinking there are going to be more tattoos very soon. Maybe not on his arms, but based on the large amount of shirtless photos he posts, he still has quite a bit of blank chest area.

As for the actual tattoos, it looks like he got a bunch of them at once. We don't follow Bieber's tattoos that closely here at Bustle, but the last time we reported on them was in January when he got a compass on his upper arm and a joker on his right forearm. With the addition of the new tattoos, that same forearm is now completely covered with the joker just part of a bigger mess. Wow. I'm pretty sure "the joker just part of a bigger mess" will be an accurate description of Justin Bieber's life in a couple years.

That bummer of a sentiment aside, Bieber filled in his arm in with a boom box, a creepy (and huge) face, the word "trust" in bubble letters, the word "love" in a newspaper font, and some sort of filler pattern that looks like fish scales. AND THAT'S ONLY THE FRONT. The back has an eight ball, a diamond, a spade, and what I am pretty sure is a ghost from Mario 64. The Banksy "Balloon Girl" tattoo that Bieber got recently is made to blend in to all of this probably because Banksy was not on board with Bieber's tattoo. Soon after Bieber posted a photo of it to Instagram, Banksy pulled a regram and captioned it, "Controversial @justinbieber #banksy" clearly mocking Bieber. Bieber has since taken his photo of the tattoo down.

It's possible Bieber did all of this just to cover up his Banksy mistake or, if we really want to give him the benefit of the doubt, maybe he really did just walk in to the tattoo parlor and say, "I've been seriously considering all of these for a long time and each and everyone is significant to me. Yes, even the Mario 64 ghost."