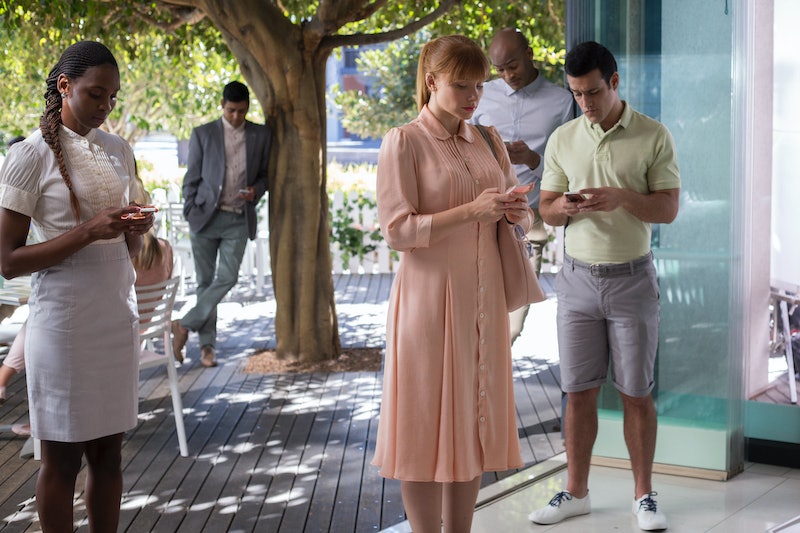 The highly anticipated third season of the UK series Black Mirror has finally hit Netflix on Friday. Like many other gone-too-soon great TV shows (looking at you Gilmore Girls), Black Mirror landed a home on the streaming site, and fans have been waiting for the anthology series to return via Netflix with baited breath. The series captivated audiences around the world as a Twiligiht Zone-esque anthology in a not-so-distant future. Black Mirror often uses technology as a tool to look at human nature and societal issues through a new lens. And, the latest season’s episode “Nosedive,” starring Bryce Dallas Howard, tackled social media, specifically Instagram, Pinterest, and “lifestyle” culture.

The Season 3 episode asks all the important questions and evokes all of the emotions a Black Mirror episode should. I felt creeped out, I audibly gasped, and I was totally glued to my screen throughout the entire episode. This particular episode was written by Rashida Jones and Michael Schur, and stars Bryce Dallas Howard as Lacie, a woman trying to move up in the world with stars she receives on a futuristic social media platform. But to understand Lacie and her motivations, you must first understand her world. Major spoilers ahead.

It’s sort of like living in a world where everyone is rated like Uber and Lyft — or even Yelp. After every interaction, you rate the person with whom you just interacted. You and your barista exchange stars, as well as the people beside you in the elevator. But, the stars aren’t just for fun. Having a high status comes with advantages and having low status can bar you from entertainment, work, and even healthcare… but more on that later. The nuances of this episode alluded to technology, privilege, and self-worth, all through the model of social media. And, honestly, some of it didn’t seem so far off for 2016.

When we first meet Lacie, she is jogging and looking at her phone. She stands in line at a coffee shop, and everyone is on their phones. She takes a bite of a cookie carefully, to ensure there are no lipstick stains and the perfect bite shape. However, she spits it out, and she takes a picture of it with a bad-tasting latte. But, you would never know that because her Instagram vs. reality game is strong. Lacie has a moment of euphoria, people like her picture. People like her. This is all too real for viewers. This could be you.

Though, viewers quickly learn that this is Instagram vs. reality on steroids. Social media has become a prison of her own making. Lacie has a co-worker who has become a pariah in the office after a break up, and viewers discover that if he drops below 2.5 stars, he will no longer be allowed in the building. We also see that there are benefits to a high score of 4.5 or higher, like discounted rent in a fancy “lifestyle” community.

Lacie is a respectable 4.2 with plans to elevate her status and get these high four benefits. The drawback to this is the question, how genuine can you be when you have to be perfect? No one can say an unkind word to each other, women speak with sweet inflections, and everyone has developed a laugh that basically sounds like a creepy tick. And, you have to keep up the charade for the likes. Lacie’s brother is the first voice of reason, warning Lacie that high fours are probably very unhappy and coining the phrase, “fake smile jail cells.”

When Lacie is trying to figure out how to boost her score, she hits what she thinks is the jackpot, a friend she has been stalking online the entire episode, a 4.8, is getting married and wants Lacie to be the maid of honor — even though they have not spoken in real life in years. This wedding will give Lacie the boost in points she has dying for.

The more fixated she gets on impressing people and raising her score to live in her dream apartment, the worse things go for Lacie. First she gets in a fight with her brother, losing points. She misses a cab, losing points. Her flight to the wedding gets cancelled and she reacts like a person, not a perfect person, losing points. Her cursing and genuine emotion also get her banned from the airport and punished, losing even more points. The only car she can afford to rent on such few points is an out-of-date lemon. She even has to wait in a separate line for the cheap car because of her status. The car breaks down, she hitchhikes — you get it, she loses points.

On her journey, Lacie gets a lift from a 1.4 named Susan, who once was a 4.6, but said screw the system after her husband died of cancer. He didn’t have access to certain treatments because he was a low four. Things continue to degenerate for Lacie, as she has to travel from the comfort of her circle and stand in this wedding. And, she has a breakdown. I won’t go into the details of her wedding crashing and antics, but she lands herself in jail, basically with no points to her name.

She finally finds freedom in her actual cell when she is stripped of technology. Lacie and a man in the cell across from hers delight in wielding curse words and insults at each other. They are both finally free to say whatever they want and express what they are actually feeling.

The episode shows how strongly appearance is linked to self-worth, and how social media has upped the insecurities surrounding appearance. And, in their society, social media has eliminated room for failure. When Lacie was in the small world of her neighborhood and office, she could pose for perfect photos. But, the moment she challenged herself and encountered new obstacles and people, that unraveled. An untested, perfect life without risks and imperfections, is one that is hardly lived. No matter how many likes it gets.