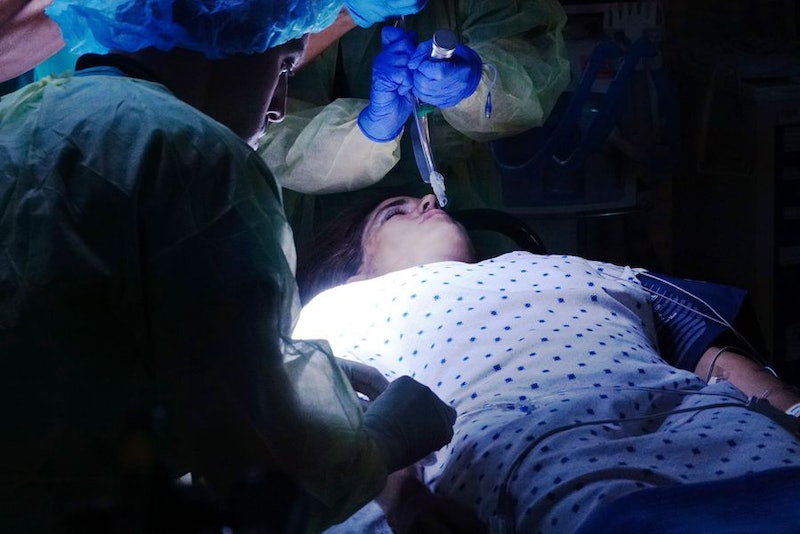 Man, can Laurel get one moment of peace on How To Get Away With Murder? First, she has a crazy possible mafia boss father, then she becomes involved with Annalise Keating and her murderous ways, then her mercenary boyfriend vanishes, and now, she’s pregnant and half dead? She needs to catch a break (but I guess none of the Keating Five have in the past three years). Laurel was found in Annalise’s burning house — will Laurel die on How To Get Away With Murder ?

The promos for How To Get Away With Murder have teased that one of the Keating Five will die this season — but what if they’re lying to us? We know that another body, a different body has been wheeled away from Annalise’s house, but that doesn’t mean the deaths have to stop there. Laurel is currently in the hospital, having been pulled from the burning wreckage of Annalise’s gorgeous Victorian, and we know she’s pregnant (I’m going to assume with Frank’s baby, but who knows). Meggy, Wes’ girlfriend who is a medical student, told Oliver and Bonnie that she wasn’t sure how it would go with Laurel. Oh, come on, How To Get Away With Murder. Hasn’t Laurel suffered enough? I thought we were turning a corner here!

Killing Laurel would not be high on my list of priorities for How To Get Away With Murder, but it would really throw a wrench into the lives of everyone around her. Frank would be devastated, because I think he loves her and he really wants to redeem himself with a new start (a family!). Bonnie would feel badly because Laurel helped keep her secret about why Frank killed Bonnie’s dad. Wes would be sad because he’s secretly in love with her (I think so, anyway). Talk about drama! Here’s another thought — Annalise had a very difficult time getting pregnant, so it especially stung when Frank helped kill the only baby she could carry to term. What if Annalise knew that Laurel was pregnant and orchestrated the house fire to hurt Laurel and kill Frank’s unborn baby? An eye for an eye seems right in Annalise’s world. There are only a few episodes left until the end of the season, so we’ll just have to sit tight and see.