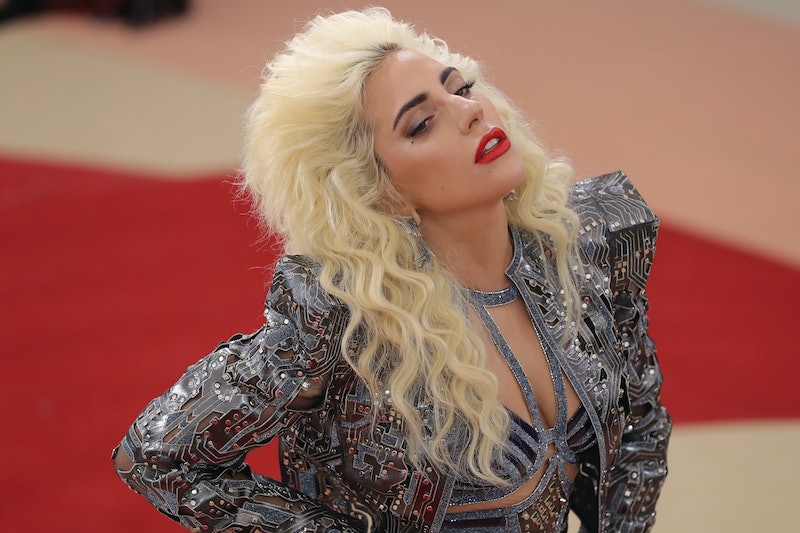 True to form, there's something extremely transformational about the songs on Lady Gaga's new album, Joanne . Of course, fans know to expect nothing less from such an exciting, musical chameleon, but the content to be found on Joanne is strikingly different from much of Gaga's former style. Joanne is reflective, heartfelt, and striving for authenticity, and, as a result, songs sound more stripped back and raw than we're used to hearing from the artist. Some of the best lyrics from Joanne are ones that lay bare Gaga's emotions. They explore ideas about the necessity of freedom (personal, romantic, bodily and societal), the lasting wounds of heartbreak, and the haunting realization that you have been deceived.

The album doesn't stay on just the one plane, but jumps between all of the desires, disappointments, dangers, and downfalls that life has to offer. Joanne can be exuberant and celebratory, but also pained and stoic, with Gaga reigning in her flamboyant instincts to be thoughtful and reflective when she needs to be.

As a result, the lyrics on Joanne vary between being poetic, abstract, dark, joyful, and self-possessed. They're lyrics that seem to demonstrate an artist in flux, showing Gaga as a musician who isn't willing to compromise on any level. Here are 19 of the very best lyrics that Joanne has to offer.

OK, so while this could be something of a reference to the heart-shaped diamond engagement ring that Taylor Kinney gave to her, I'd prefer to think of this line as a battle cry of strength. It's a lyric that celebrates being tough and possessing a sense of tremendous self-worth.

2. Every John Is Just The Same/ I'm Sick Of Their City Games/ I Crave A Real Man/ I'm Strung Out On John Wayne ("John Wayne")

For those of you who didn't grow up reading Hubert Selby Jr. novels, a John is also a term for the customer of a sex worker. Here, Gaga appears to be using that term as a derogatory one, making it clear that she isn't interested in someone so one track minded, but instead wants a hero of a man just like the persona of the iconic actor, John Wayne.

3. Your Hands Are Mine/ I Do A Trick/ Pretend That I Am You Until It Clicks/ I Come Alive ("Dancin' In Circles")

4. But I Feel You Watching Me/ Dilated, Falling Free/ In A Modern Ecstasy/ Where Are You?/ Cause I Can't See You/ It Was A Perfect Illusion ("Perfect Illusion")

In a song about the various deceptions that inform our modern lives, this line clearly embodies the thrilling illusion to be found in social media validation or the disconnect of online relationships.

5. Take My Hand, Stay Joanne/ Heaven's Not Ready For You ("Joanne")

Written about her aunt who died aged only 19, this line is simple and stunning.

6. Head Stuck In A Cycle, I Look Off And Stare/ It's Like That I've Stopped Breathing, But Completely Aware ("Million Reasons")

Anyone who has suffered the full, intense mental slam of a failing or bad relationship will recognize exactly what Gaga is describing here. And it's pretty painful.

7. Put On A Pretty Little Number/ I'm Wearing You Still/ It Was A Hell Of A Scene At Daddy's Feast/ Nobody Saw It Coming But The Little Red Devil In Me ("Sinners Prayer")

Because there just had to be at least one song that gave us the Mother Monster we know and love, right? This lyric delivers on that persona perfectly. Fiendish and fierce, this is Gaga at her playful and ferocious best.

Hidden within a song in which Gaga gleefully takes on her haters is this line that swaggers with sexual confidence. Suggesting that those who criticize her are also getting off on their hatred (and possibly on how she looks, too), the lyric is a stunning middle finger to her critics.

9. I Promised I Wouldn't Say Goodbye/ So I Grin And My Voice Gets Thin ("Joanne")

Succinctly expressing that heavy and distinctly indescribable feeling that comes with mourning the death of someone that you love, this line also nails the struggle of moving on.

10. Good Thing I Know What I'm Worth/ Want A Good Thing, Put The Money Down First ("Diamond Heart")

I have only two words to say to this lyric, and they are hell yeah.

Beautifully illustrating that idea of becoming completely swept up by someone, and spending all of your time enjoying those feelings with them. And, let's be honest, that's the best drug going.

In describing the burden of sin, Gaga takes to singing about a lover who sounds full of their own burden. This line perfectly expresses the idea of wanting to support someone, but being unwilling to take on that person's lingering burdens and baggage, as a result.

13. Sisters Never Pack Up/ We Always Run Back, Love/ Seven Years Ago, I Said You Make It/ Sonja Was Joanne's Friend/ Tough Girls On The Mend ("Grigio Girls")

Written for Sonja Dunham (the executive director of the Haus Of Gaga), who has been fighting a battle against cancer for the past seven years, this lyric celebrates the intense power of female friendship (and rightly so).

But "Grigio Girls" isn't the only song on Joanne that beautifully presents the joy of female friendships. This lyric from the girlfriend-celebrating "Hey Girl" is a powerful affirmation on those best friends that you keep from childhood and that you continue to grow, and have fun, with.

15. High Like Amphetamine/ Maybe You're Just A Dream/ That's What It Means To Crush ("Perfect Illusion")

Demonstrating the deceptive highs of love, this lyric finds painful parallels between the delusional after-effects of drugs and the crushing falsities of the heart.

16. If I Had A Highway, I Would Run For The Hills/ If You Could Find A Dry Way, I'd Forever Be Still ("Million Reasons")

17. Maybe She's In Too Deep/ Her Love For Him Ain't Cheap/ But It Breaks Off Just Like A Knockoff Piece/ From Fulton Street ("Sinners Prayer")

That's Fulton Street in New York, folks, which has a bit of a reputation for being a market place of fake items (though it's an area currently on the up). This lyric feels as though it's almost one of the ultimate representations of some of the main themes of the entire album: heartbreak, deception, and the merits of highly valuing yourself.

18. So Why Do We Gotta Tell Each Other How To Live? / The Only Prisons That Exist Are Ones We Put Each Other In ("Come To Mama")

Gaga lays down some home truths in support for giving people the right to live free, as themselves.

19. Shots Were Fired Down The Street/ By The Church Where We Used To Meet/ Angel Down/ But The People Just Stood Around ("Angel Down")

Gaga revealed on Zane Lowe's Beat1 show that the chilling lyrics of "Angel Down" were inspired by the death of Trayvon Martin, and no lyric so heartrendingly depicts that tribute to him on this song as this one.

Lyrically and musically, Joanne is the most radically different from all of Gaga's past albums, but that isn't a bad thing. Instead, Joanne is proof that Gaga is progressing into a new musical chapter and developing a style that is fresh, intimate, and emotionally provocative.

More like this
How Lady Gaga & Adele Are Closer To The EGOT All Of A Sudden
By Jake Viswanath
Woodstock Co-Founder Michael Lang Faced Several Lawsuits After The 1999 Festival
By Brad Witter
Lady Gaga Will Star In 'Joker: Folie À Deux' With Joaquin Phoenix
By Jake Viswanath
Everything To Know About The Musical 'Joker' Sequel – & Lady Gaga’s Role
By El Hunt and Sam Ramsden
Get Even More From Bustle — Sign Up For The Newsletter