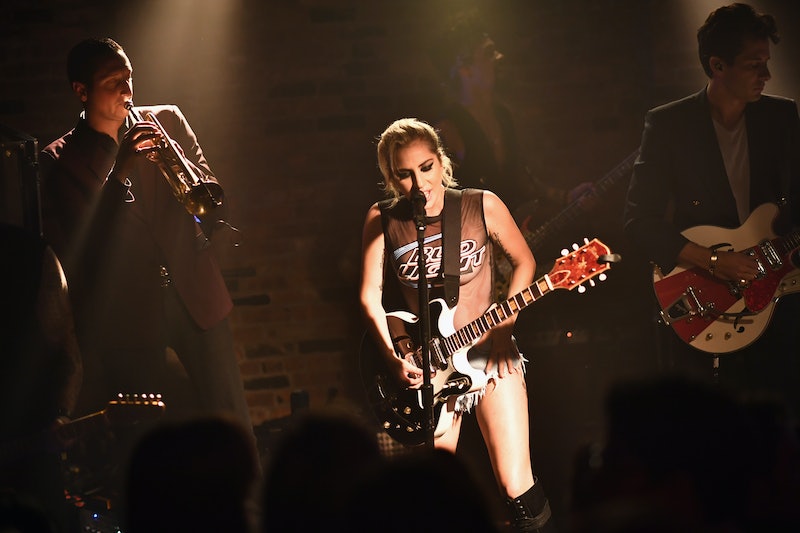 It's one thing for an artist to include references to someone in their lyrics, but it's a whole 'nother ballgame when the album title itself is a tribute. Gaga dropped her fifth studio album, Joanne, on Oct. 21, and, amid basking in all the amazing songs, people have also been wondering if there's any meaning behind the name. Who is "Joanne" from Lady Gaga's album? Whoever she is, she must be pretty important, for the platinum-selling artist to dedicate a whole album to her.

As it turns out, Joanne is a sort of double tribute, both to Lady Gaga's aunt Joanne, who died back in 1974 before the artist could even meet her, as well as to Lady Gaga herself. Layering two meanings into one album title? I should've known you wouldn't let your fans down, Lady Gaga.

Her aunt Joanne Stefani Germanotta was born on Mar. 12, 1955, presumably the sister of Gaga's father, Joe Germanotta, since they share a last name. She was a poet and a painter herself, but, due to her untimely death from lupus at age 19, Joanne Germanotta tragically never achieved success as an artist. And even though Germanotta died 12 years before Gaga was born, the latter has felt her influence keenly, stating in 2011, "I never met her, but she’s been one of the most important figures in my life."

Among other tributes, Gaga has a tattoo for her aunt, included one of her unpublished poems in the liner notes of her 2008 debut album The Fame. Her biography even credits Joanne Germanotta's memory with helping Gaga kick an addiction to cocaine early in her career.

I thought I was gonna die. I wanted to be the artists I loved, like Mick Jagger and Andy Warhol — and I thought the only way to do it was to live the lifestyle. But then I realized my father's sister Joanne, who'd died at 19, had instilled her spirit in me. She was a painter and a poet — and I had a spiritual vision I had to finish her business.

While there are many elements of this album that honor Joanne Germanotta for her contributions to Gaga's career, there's also an element of this that reflects back on Gaga herself. In addition to all the tributes I mentioned earlier, there's actually a tribute to Joanne Germanotta right in Lady Gaga's name. She was born Stefani Joanne Germanotta, a direct reversal of her aunt's name. For that reason, the album also speaks to the what is at the center of Gaga herself. As she told T Magazine in an interview:

There’s two sides of me. There’s the side of me that’s a true rebel and then, another side of me that is my father’s daughter. And so this album, it doesn’t lean necessarily in a particular direction, which is why the album title is Joanne. This is my middle name. This is the middle on the center of me.

More than anything else, Joanne represents the heart of Lady Gaga, the part of herself that's guided her from the beginning. At first, that voice came through as a message from the grave from her aunt, Joanne Germanotta, and this album represents the moment when she's learning to hear it from inside herself, her core, without slipping off toward the poles of her personality. It's a deeply personal meaning to ascribe to the album, and I think it spells out great things for Lady Gaga's peace of mind, not to mention her work moving forward.