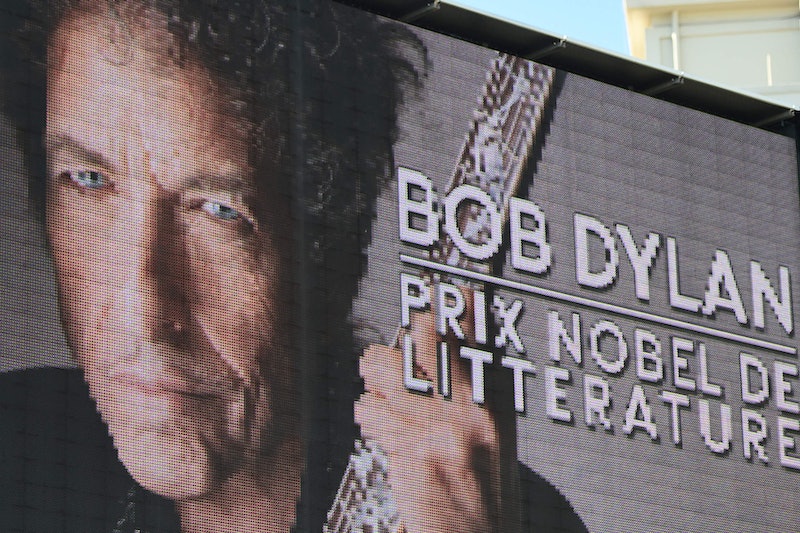 Since Oct. 13, American folk artist Bob Dylan has consistently made headlines for his 2016 Nobel Prize in Literature win, and his subsequent cold shoulder to the Swedish Academy. Though he eventually added "winner of the Nobel prize in literature" to the lyrics section of bobdylan.com, that sentence, the sole mention of Bob Dylan's Nobel win, has disappeared from his website. And people around the world watch the Nobel drama like, yeah, this fits in perfectly with how the rest of 2016 is going.

This isn't Dylan's first awards rodeo. In addition to Grammy and Oscar wins, the musician has also taken home a Pulitzer Prize and the Presidential Medal of Freedom. No one saw the announcement of Dylan's Nobel win and thought he'd ignore it, but it's within the realm of possibility for a person who has spent the better part of a century asserting and reasserting himself as his own man.

Bob Dylan is notoriously private. He removed himself from the public eye in 1966, the same year he released his seventh studio album in four years, Blonde on Blonde.

That's not to say he's a complete hermit, however. The 75-year-old Dylan performs 80 or more live shows every year, even when he hasn't released a new studio album. In 1991, he launched his Bootleg Series of releases from his unpublished library; the series reached new heights in 2015, when Dylan offered up Volume 12: an 18-disc, $600 collection of his 1965-66 backpages, with more modest versions available to fans strapped for cash.

Regarding the disappearance of Bob Dylan's nobel win from his website, The Guardian reports:

Whether the latest twist in the Dylan-Nobel saga is the result of an administrative foul-up or a deliberate choice is unknown — stars’ websites are usually run with extremely limited input from their notional owners, and it’s entirely possible Dylan never knew either that his site had made reference to the prize or removed it. Though it is, of course, less likely that his manager, Jeff Rosen, would be unaware.

Whatever the reason for Dylan's "unacknowledgement" of the Nobel Prize, the Swedish Academy doesn't take no for an answer. Writers, researchers, and other figures who have refused — or been forced to refuse — the coveted awards in the past continue to be listed among their fellow winners, and no alternates may be chosen. Boris Pasternak and Jean-Paul Sartre both turned down Nobel Prizes in Literature, though for entirely different reasons. Whether Dylan will embrace the award or not remains to be seen.

The Nobel Prize Award Ceremony will be held on Dec. 10 in Stockholm.