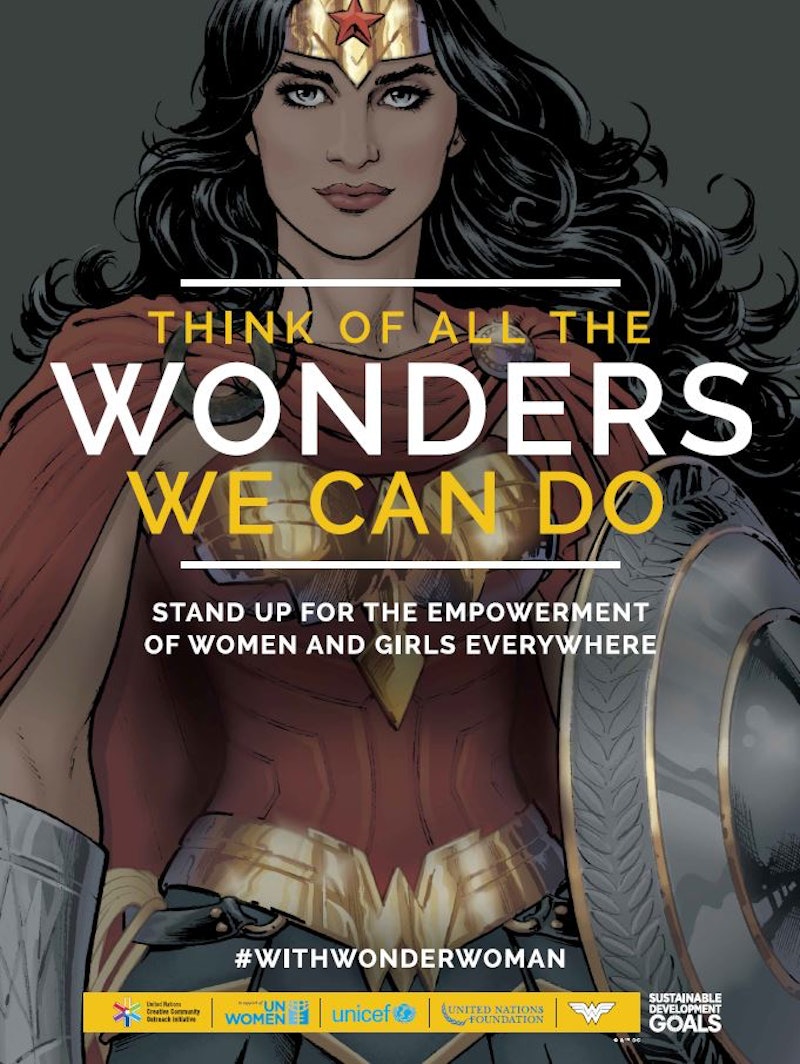 Today marks Wonder Woman's 75th anniversary, meaning that the Amazon princess has been fighting for justice even longer than the United Nations. And today Diana received one of the most prestigious birthday gifts anyone could ever hope for: she was designated as a United Nations Honorary Ambassador for the Empowerment of Women and Girls. The ceremony took place at the U.N. headquarters in New York today, with DC Entertainment president Diane Nelson, Under-Secretary-General Cristina Gallach, Wonder Woman director Patty Jenkins, and Wonder Woman actors Lynda Carter and Gal Gadot all in attendance. Wonder Woman's image and comic books will be used to promote women's empowerment across the globe as part of the U.N.'s Sustainable Development Goals' initiative to end gender inequality.

It was a celebration of heroic woman and girls worldwide—but not everyone was impressed.

The event's audience was almost entirely made up of excited girls and boys in over-sized Wonder Woman t-shirts, including at least one troupe of girl scouts. Just before the special guests arrived to mark Wonder Woman's big day, however, a group of adults filed into the back of the auditorium. As the opening remarks began, they all stood in silence, one fist raised, to protest the designation of Wonder Woman as Honorary Ambassador.

A petition to recall Wonder Woman as ambassador has been going around the U.N. since her new position was announced, because many staff members feel strongly that a real, human woman should have been chosen over a fictional, comic book heroine. This comes after the recent disappointment that the U.N. rejected seven female candidates for secretary general.

Regardless of how you feel about the decision, though, it was abundantly clear that speakers Diane Nelson, Lynda Carter, and Gal Gadot all believe in the character as a feminist symbol. Nelson acknowledged that the comic books industry has "for too long and too often" portrayed women as damsels in distress—but she believes that Wonder Woman can help change that negative stereotype. Wonder Woman stands for justice, for peace and for equality. Wonder Woman doesn't just say, "look what girls can do," Nelson said, "but look what girls already do."

She's a woman who "takes no nonsense from any man, even Superman," Nelson added.

Lynda Carter also spoke passionately about why she believes in Wonder Woman as a source of inspiration for all women, and why she salutes the U.N.'s choice. When Carter was cast as the lead in the Wonder Woman TV show, over 40 years ago, she said that people were skeptical of a female-led series. Wonder Woman helped revolutionize how women were represented in the media. Many women still approach Carter daily to say how much the character of Wonder Woman inspired them, or helped them through difficult times.

"Wonder Woman lives, do not doubt it," said Carter firmly. "She is real, she lives in me... she lives in every woman."

Gal Gadot followed Carter with a similar message. "Sometimes we need something or someone to aspire to," she said. Wonder Woman can "inspire us to be more, to demand more, and to do more."

Carter and Gadot fully embody the strength and poise one might expect from an Amazon warrior, even without their lassos of truth. But the Wonder Woman protesters do have their own valid points.

There's no denying that there are real-life wonder women who would deserve the honor of being named Honorary Ambassador for the Empowerment of Women and Girls. The U.N. has chosen fictional ambassadors before, with Winnie the Pooh serving as the Day of Friendship Ambassador, and the Angry Birds (yes, those angry birds) as ambassadors for the International Day of Happiness. Nonetheless, empowering women and girls worldwide is a more serious effort than celebrating friendship and happiness, and wishing for a qualified human woman to head the initiative is valid. Why can't there be more than one ambassador for woman and girls, after all? There's plenty of inequality out there for all of us to tackle.

The petition also reads that a "a large breasted, white woman of impossible proportions, scantily clad in a shimmery, thigh-baring body suit" is not appropriate for a U.N. ambassador. According to the petition, she is "the epitome of a ‘pin-up’ girl."

I think most supporters of the U.N. can understand the concern over having a white woman representing all women. It's 2016, people. As for the pin-up girl accusations... well, we've reached the hairy section of modern female empowerment that boils down to a difference of opinions. Is calling Wonder Woman a "pin-up" girl pointing out objectification, or shaming her? Is reducing a fierce, world-saving heroine to her body-type adding to the objectification? Does cleavage-baring armor really make sense for a battle-type scenario? Help.

Putting aside the fashion critique, it seems clear that the protesters find the choice of Wonder Woman to be, in a word, silly. And, while we do need a less white, more real woman at the helm of global feminism, it's dangerous to underestimate the power of a fictional character. Wonder Woman is instantly recognizable. She's synonymous with female power. She's broadly appealing to boys and girls, which is a very helpful tool in the immediate fight against gender inequality, if not the ideal tool.

As all comic book readers know, superhero comics are not just silly. There are stories, and stories matter. As Diane Nelson put it today, "Stories can educate and encourage... they can light a fire in our soul and lead us to good."

But the stories and characters who inspire us deserve to be honored, too. Looking out at that audience of children in their Wonder Woman shirts, some with tiaras or bracelets, at least one with full Amazon regalia, it's clear that Wonder Woman still means something. She's 75 years old, and she's still capturing children's imaginations. Before the event began, little girls rushed to the front of the room to have their pictures taken in front of the huge Wonder Woman poster. Most of them struck a heroic pose. Watching them all beam up at the larger-than-life superhero, brimming with confidence, it’s easy to see why Wonder Woman will make a great ambassador for young women the world over.