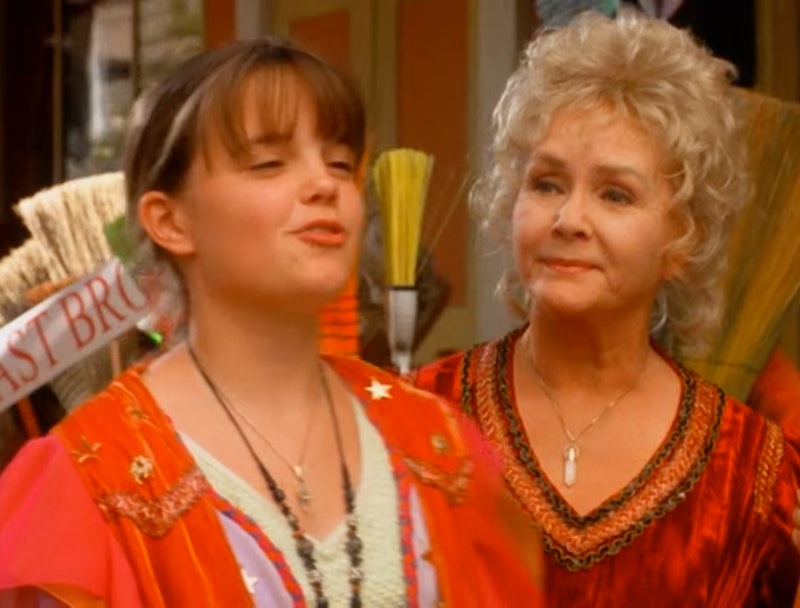 Halloween's just around the corner, which means one key thing: you're due for a rewatch on the 1998 made-for-TV Disney Channel classic, Halloweentown. You know the drill: Debbie Reynolds (who is everything and has been in everything, including Singing In The Rain) is a grandma/witch who lives in another world, Halloweentown. When she comes to the mortal world to visit her grandkids, who have no freakin' idea why things get cool and interesting when she's around, chaos ensues. There was a bunch I hadn't picked up the first time around, but I'll get to the 38 things I noticed when re-watching Halloweentown in just a second.

The charm of the movie is that, despite being primarily focused on the viewpoint of the kids, it has a pretty adult perspective on things. Everyone in this movie is totally evolved and likes trying to consider the other person's point of view. Not to make it political, but it's kind of a refreshing watch in this Donald Trump-dominated election cycle. However, it's not perfect. It acts like being into the environment is too nerdy for words. It's problematic about other people interfering in a single mom's parenting. It discounts the necessity of physical attraction when dating someone. Let's take a closer look.

1. This Opening Shot Makes The Movie Look Like It’s Going To Be A Tragic Wartime Drama

2. This Is Marnie And It’s Important You Know That This Isn’t Her Halloween Costume, This Is Just How She Dresses

Lime green shirt, orange skinny jeans, orange scrunchie, and (though you can’t see them, so you’re going to have to trust me on this) purple slides.

3. This Is Not A 40something Accountant Who Resides In Connecticut

This is her little brother, and he is the voice of logic, reason, and environmental concerns in this movie. I should spell this out: the movie thinks being preoccupied about the environment is really nerdy. Apparently, global warming wasn’t a thing in 1998.

4. Marnie’s Really Hung Up On Halloween, Which Sucks For Her, Because Her Mother Won't Let Her Participate In The Holiday

Her friends are like “It’s her holiday! You should let her go out, Marnie’s mom, she spends our whole math class drawing ghosts in her notebook,” like this isn’t a concerning fact.

5. Marnie Is All “I’m Old Enough To Make My Own Choices”

But then Marnie’s friend, who has a certain earthy wisdom about her, is like “Yeah, I guess so. But is there an age for that?” Preach. This tiny teen witch is going to grow up to have her own self-help empire. Paperbacks, podcasts, the lot.

6. Sophie Wants Cookies And Her Mom Tells Her To Wait Until After Dinner

But then, through the force of Sophie’s sugar lust, cookies zip through the air towards her. Since the whole mechanics of magic in this film are explained as being about wishing for things and giving yourself permission to wish for them, I’m pretty sure I would be queen of cookie magic, too.

7. This Is Grandma And You Know She’s Going To Be Cool Because Of That Shirt

Rocking that two collar "I don’t give a hoot what is conventionally expected of me by society/fashion" vibe. Respect.

8. She’s Brought Costumes For Her Grandchildren And I’m Not Going To Say That You Can Tell Via The Costume Choices Who Her Most/Least Favorite Grandchild Is, But Maybe You Can

9. When Grandma Reads Her Grandchildren The Picture Book Halloweentown, Marnie Goes Nuts At This Page And Is Like “It’s Me” As If It’s Really Meaningful

But do illustrations get any more generic than this? This is one step up from being the “girl” symbol you get on toilet doors.

10. "Just Came By To Check That Everyone's Got Their Thermostat Set To 68 Degrees, Because It's Important To Conserve Energy During The Evening Hours”

In 1998, everyone rolled their eyes at this would-be earth warrior, but, in 2016, you know this kid’s best friends with Leo DiCaprio.

11. The Witches On The Bus To Halloweentown Look Really Fun

Is being a teen witch just about wearing dark lipstick and going clubbing in the mortal world on Halloween with your friends? Maybe.

12. The Gremlin-Type Thing And Frankenstein Are Really Tuned In To Mortal World Pop-Culture

“They said I looked like something from The Jerry Springer Show.”

13. Don’t Tell Me The Mayor Of Halloweentown Doesn’t Look Like Gene Wilder As Willy Wonka

Because you — and posterity — know I’ve got a point.

14. #TFW The Cab Takes Such An Elaborate, Lengthy Route Home, You’re Not Sure Your Cab Driver’s Even Alive At The End Of It

But, swings and roundabouts — at least you get to skip out on the fare.

15. This Is The “Town Punk” And He’s Kind Of A Big Deal, Apparently

But, if that’s the case, why is he wearing a harlequin waistcoat?

16. I Feel Like So Much Of This Film Is On The Cutting Room Floor

Throughout the whole film, there are all these hints that Marnie’s little sister Sophie has way more intense, prodigious magical powers than her. With no training at all, she turns the lock on her grandma’s gate into a frog. Why is this narrative thread never tied up or commented on? I demand answers, Reddit.

17. This Is What A Witch Microwave Looks Like And I Need One, Stat

Put your half-cooked risotto in, hit “toil,” and save yourself the arm strain.

18. The Moment You Start To Suspect Something Might Be Afoot In Your Town

Because you’re sick of Marvel movies too, but you’re not giving up on the film industry altogether.

19. Waistcoat Asks Marnie Out On A Date To Go Eat Ice Cream

And crashes and burns: “You know, I was hungry but then I smelt something stinky — it must have been the big cheese.” Somebody call 911, this girl’s on fire.

20. Now This Is What I Call A Joyride

Though it's also a little morally suspect. Marnie's mom made it clear that she didn't want Marnie growing up to be a witch, and Marnie's grandma's basically only showing her the really fun, cool stuff. That's like saying all you do while being an actor is rip into free goodie bags and sit at the front row at the Oscars.

21. And You Thought You Had It Bad With Joanne In Marketing

And it's weird, because her kids are right there. That’s uncomfortable for everyone.

23. This Is What The Force Of Evil Destroying The Town Looks Like

Is that a papier-mâchémask? You can do better, Halloweentown.

24. Grandma's Reaction Is The Same As Ours

Concerned about how not scared I am right now.

25. The Feel When You Sass Your Mom Mercilessly Because You Think She’s All-Powerful

Then at some point you realize you've slayed her with your words. Oops.

It doesn't get any better than this.

27. How Hunger Games' Capitol Dwellers Is This Hair?

I want this hairdo. Not for Halloween, though. Forever.

28. There’s An Elaborate Storyline Where They Have To Find The Sweat Of A Ghost

And, improbably, find a ghost in a sweat machine. None of this makes any sense. Why would a ghost want to lose weight?

29. Also, This Vampire Is At The Dentist

And, if you thought your dentist appointment was a nightmare, fang god you’re not this lady.

30. When Your New Look Is So On-Point That He Can’t Staring

The world’s almost ending, but he still can’t stop checking out your new hood.

31. Politicians Will Do Anything For Publicity These Days, Huh?

Including morphing into the embodiment of evil from the top of the city hall. Politics: it’s a tough game.

Or the townspeople of Halloweentown?

33. Who Doesn’t Look A Little Sexier Dressed Up As Severus Snape?

Those black robes, though. Severus Snape: the ultimate bad boy.

34. Feel Like This Is A Visual Metaphor For Burgeoning Pubescent Sexuality

Or maybe he really is just a secret warlock. I hope so. He could solve our environmental problem like that.

35. Oh, So It Turns Out Waistcoat Was Helping The Baddie So He’d Magic Him Into Being Handsome

This is his true form. Which is totally fine, but Marnie's pitying kiss on the cheek and "Yeah, but I was so much more into you when you were good." is not great. C’mon, physical attraction is still a vital component of a romantic relationship.

36. A Bus That Will Blend In Effortlessly In The Mortal World

37. Can We Talk About How The Mom Looks Exactly Like Jessica Chastain?

A little-known early movie for The Tree Of Life actor. Or an imitation there of.

I would trade my last kidney to find out who this creature was in the movie.

Have I convinced you? Are you lining this movie up as I type? I certainly hope so. It's got it all: chills, thrills, a super sassy teenage girl with amazing taste in scrunchies. This is one re-watch that'll have you hopping on the first bus to Halloweentown.