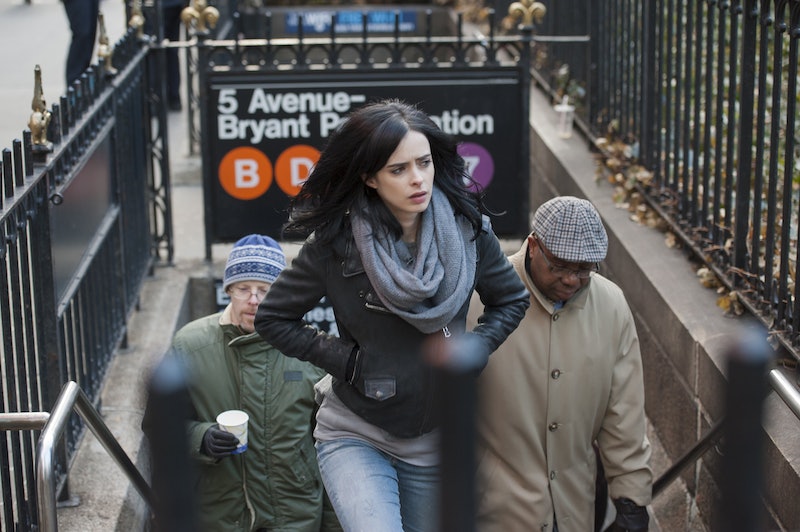 When it premiered on Netflix at the end of 2015, it was clear that Jessica Jones was a show determined to tell female stories in an uncompromising manner. Even better, as far as superhero narratives go, Jessica Jones was refreshingly feminist, as it gave our titular heroic tremendous power and agency, as well as presented a set of strong female supporting characters. So, it's deeply heartening to hear that Jessica Jones Season 2 will only feature female directors. Not only is it a progressive decision which fits with the ethos and the angle of the show, but it's a crucial move to make at a time when women are still woefully underrepresented behind the camera.

The announcement concerning these 13 episodes was made by Jessica Jones showrunner Melissa Rosenberg at her Transform Hollywood panel, and I seriously can't applaud it enough. As well as providing some crucial inclusivity to an industry dominated by caucasian men, this decision also provides some visibility to women who are perhaps not being given the same opportunities as their male counterparts are. And moving forward, creating more diversity behind the camera can only have a positive influence on diverse portrayals in front of it, too.

Because currently there's a deeply troubling diversity problem happening behind the scenes of all TV shows. In September, a study conducted by the Directors Guild Of America revealed that women only directed a dismal 17 percent of all TV episodes between 2015-16, with minority talent only directing 19 percent of episodes. And this is something which impacts some of the biggest shows currently on television.

So, by giving every directorial opportunity on Jessica Jones to women is a great way of turning this inequality on it's head. Not only does it make a powerful statement to the industry as a whole, but it also creates opportunities for talented women who are more than qualified for the position.

Last month, director Ava DuVernay also announced that she'd only hired female directors for her show, Queen Sugar. One of those directors, Tina Mabry, revealed to Fusion that the lack of female and minority representation in film making (whether for the small or big screen) comes down to nothing more than women and minorities being not given the chance to shine:

"We just never had the opportunity ... And that is something that Ava provided all of us with. That opportunity to actually showcase the skill that she knew we already had but had not gotten the chance to due to our industry, which struggles with inclusiveness."

And that's perhaps the main thing that isn't always considered as a factor in conversations regarding inclusiveness and representation — opportunity. By giving women and minorities far less film making opportunities with which to allow them to become known for their work, the industry ends up perpetuating the idea that this may just be because they simply aren't as good at the job as the people who did get hired. That's a dangerously misinformed assumption to have floating round any workplace. There's nothing more dispiriting than wanting to do something within a work environment which visibly makes no effort to include you.

This is why Rosenberg's announcement is so invigorating to hear, particularly in following DuVernay's female directorial announcement last month. These kinds of creative decisions can have a fantastic impact not just on the industry as a whole, but also in providing crucial encouragement to up-and-coming female talent who can see that there's a definite platform emerging for their skills.

On another level, I also thing it's critical that a show like Jessica Jones, which is irrepressibly dominated by powerful female characters and narratives, allows for female identifying individuals to take charge in developing it's storytelling. That's not to say that men are any less qualified or capable of those duties, but more just that women deserve to finally be given the agency with which to deliver stories which feel authentic and that other women can relate to.

At a time when women are still striving for equality and recognition in the industry, this idea is more crucial than ever. If industry opportunities for women can't be opened up within female-oriented shows like Queen Sugar and Jessica Jones, then where else can they be?

Jessica Jones' second season will be coming to Netflix at some point in 2018 and it sounds as though we won't just have on-screen female heroes to look forward to this time round, but also female heroes behind the camera, too.