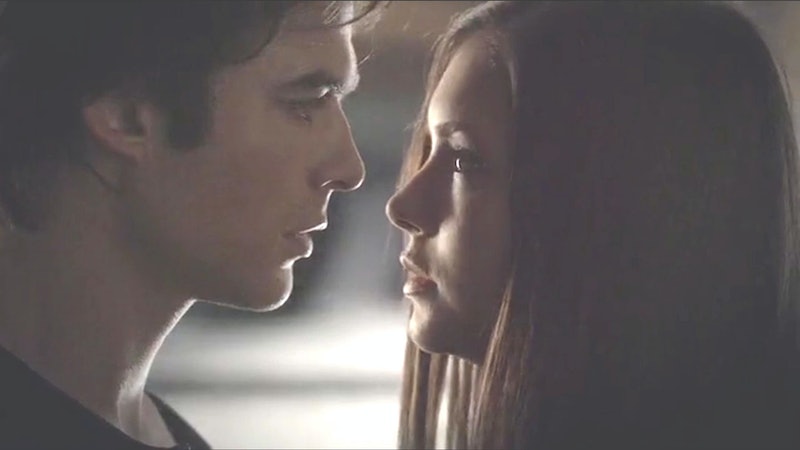 If there's one thing CW's The Vampire Diaries is good at, it's convincing us that the worst relationships are the best ones, which is how fans found themselves divided on whether Elena Gilbert should end up with Damon or Stefan Salvatore. Former lovebirds Elena and Damon got back together during last week's episode and have since bonded over their common interest in drinking vampire blood. Which has Delena 'shippers rejoicing — they do have great chemistry — but is this pairing the series' endgame?

Fans have a lot of different opinions as to which relationship the series will end with, even though there's no end in sight for TVD. And since we can't necessarily look to the novels by L.J. Smith for answers, we're left to guess where Elena's final love story will land. There's the Doppelgänger Curse, which would mean that Stefan and Elena would have to end up together — the curse wouldn't allow otherwise — but there's another theory that Elena's relationship with Stefan was just a vehicle, through which she arrived at her relationship with Damon naturally.

As far as we know, the curse isn't that strong — otherwise Stefan and Elena would be together right now — so we're going to rule out that it'll change everything in the end. I mean, Katherine never got together with Stefan for real, so who's to say Elena needs to? We also don't think that it's the intent of showrunner Julie Plec to make us believe that Elena used Stefan as a way to get to Damon.

So where do we stand? We think that if Elena and Damon end up together for good, it's because of specific actions by Stefan over the course of the series. And here's why:

Yes, he literally saved her from drowning with her parents when they drove off of the Wickery Bridge. But if you think back to the beginning of the series, Stefan taught Elena how to be alive again. When he found her, she was hanging out by her parents' graves and trying desperately to understand why they'd been taken from her. Their relationship, however unhealthy it might have been in its early stages, saved her from self-destructing out of grief. She latched onto him immediately — claiming love at first sight — when really, she was just craving some kind of connection that didn't seem as mundane as her simple, high school relationship with Matt.

But we won't blame this entirely on Elena — Stefan let himself fall in too deep at first as well. They succumbed to their feelings way too quickly without determining whether or not they were really about love or just about familiarity and a break from loneliness.

Stefan Pushed Her Away

Here's where Stefan literally pushed her into Damon's arms. When Stefan went all Ripper on everyone (to save Damon's life) and just wreaked havoc all over the place, he primed Elena for being with Damon. As the Ripper, sensitive and romantic Stefan Salvatore became a raging sociopath that DGAF about anything or anyone, including his former girlfriend. Elena was put through the emotional ringer of having to see the love of her life become a completely different person.

Which brings us to Damon. Stefan, even though he did something selfless, gave Elena the experience she needed to not only cope with, but to look past Damon's malicious behavior and love him no matter what.

Stefan Taught Her To Forgive

Again, Stefan's biggest fault and the only thing working against him is that he did all of this first. He hurt Elena time and time again, whether he meant to or not, but she forgave him. And even now, after he walked away from her and Damon and wished he'd never met her — they still have a relationship that borders between friendship and romance at any given time.

And Stefan, as a character, is so forgiving of everyone around him that it could be a fault. He forgave his brother for stealing his girlfriend and he forgave Elena for running off with Damon — Stefan's constantly practicing forgiveness to the point where its exhausting. So it's only to be expected that, by association, Elena's developed the same habits and it's allowed her to forgive Damon every time he screws up.

This is perhaps the biggest factor in why everything Stefan's done in their relationship has driven her towards Damon. When Elena turned, he fought tooth and nail to find the Cure so she could be human again. And at first, she was grateful — we always forget how when she first became a vampire, Elena had a mental breakdown about wanting to be human — until she wasn't anymore. He didn't accept that Elena wasn't the same person that he'd fallen in love with and he forced the entire Cure debacle on her.

It wasn't just a matter of trying to force her to turn her humanity back on after Jeremy died. Stefan was initially supportive when she went through her transition, but he tried tooth and nail to force his lifestyle on her. And when that didn't work, he started on his quest for the Cure so she could take it without even asking her if she wanted to be a human again.

These instances aren't, as some fans would suggest, part of the natural progression of falling out of love with your "first love." And even though Stefan couldn't help it at times, his actions drove Elena to the place she is now, constantly falling deeper into a toxic relationship with Damon. Of course, we don't know exactly how the series will end romantically — but it's a fair guess to say that Elena and Stefan won't end up together while Damon's still around. Stefan pushed and changed Elena way too much and she's so far from the girl she was in the pilot episode that their love doesn't even make sense anymore. So, sorry, Stelena shippers, but this relationship has sailed.

More like this
Legacies Showrunner Said There Is Still Hope For More Vampire Diaries
By Gretchen Smail
“The Door Is Always Open” For Another 'Breaking Bad' Spin-Off, Says AMC Boss
By El Hunt
Emma Thompson, Lashana Lynch, & Stephen Graham Lead Netflix’s 'Matilda'
By Sophie McEvoy
Why You Loved 'One Tree Hill' So Much — And Still Do
By Sabienna Bowman and Radhika Menon
Get Even More From Bustle — Sign Up For The Newsletter