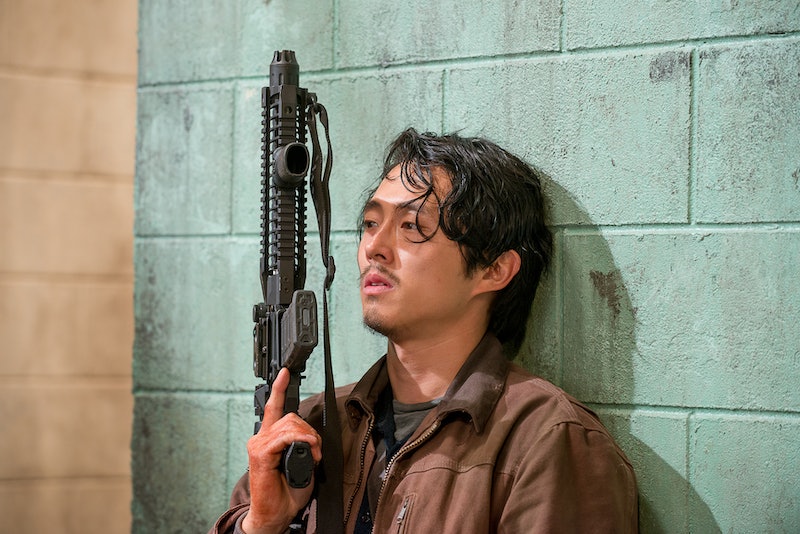 Spoilers for The Walking Dead Season 7 premiere ahead. Put the final nail in the coffin of crappiness that is 2016, because Negan killed Glenn on The Walking Dead after all. The series even directly adapted that infamous image from the comics with his eye bulging out of his head, adding another gut-punch to this already devastating episode.

Because of said comics, I knew Glenn dying was a strong possibility, but it still hurts. For one glorious moment, it seemed like he was in the clear. First, Abraham was killed, and I thought that was it. Isn't that enough? Haven't we suffered enough? Apparently not. After Daryl jumped from the ground to punch him, Negan decided that another victim needed to be chosen, and the first blow to Glenn's head happened so fast, it was difficult to see who Lucille was hitting. It didn't matter that the Season 6 cliffhanger had been resolved with Abe, Negan wasn't finished.

Honestly, it was a frustrating twist. Why did the show go through all of the pain of teasing Glenn's death last season with the dumpster fakeout, only to have it play out almost exactly the way it happened on the page? It's hard enough that the Season 7 premiere dragged out the inevitable through the first commercial break, and then it tricked us into thinking the tragedy was over, only to let Negan claim a second victim and add shock value to Glenn's highly predicted demise.

This two-fold death also creates an unfair domino effect with Denise. She "took" Abraham's death by arrow from the comics, and then Abe "took" Glenn's death by Lucille. Why did Glenn have to die that way too? And, not only is he dead for real, but it happened because Daryl acted out, which he'll never forgive himself for, according to Norman Reedus on Talking Dead.

Of course, he isn't the only character who will struggle with Glenn's death. After she watched her husband be beaten to death, Maggie made it a mission to get back to Hilltop and figure out a way to fight the Saviors, even though she's extremely ill. Will this put her in even more danger? Sasha and the rest of the group volunteered to get to her Hilltop safely, which means they may be at more risk than ever.

Then there are the emotional consequences. Glenn was easily the heart of the group. He's been there since the beginning and always brought a more positive outlook to whatever they were facing. But because of everything Glenn stood for, in a tragic sort of way, Negan didn't win. The group will find a way to go on, because as Maggie already knows, that's what Glenn would have wanted.