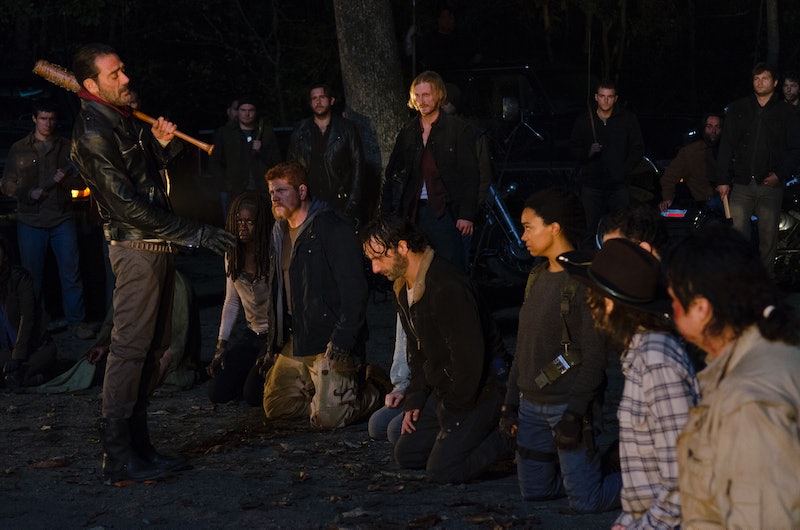 Spoilers for The Walking Dead Season 7 premiere ahead. Over the course of its first six seasons, viewers knew that The Walking Dead was not afraid of anything, whether it be a particularly gruesome death, a heartbreaking scene, or a major deviation from the comics the series is based on. However, it was still shocking when the Season 7 premiere combined all of those elements and Negan killed both Glenn and Abraham on The Walking Dead. Not only was this scene twice as devastating because fans now must say goodbye to two beloved characters, but because it shows that from this point forward, truly anything can happen.

In Robert Kirkman's comics, Negan only killed Glenn in the big Lucille scene — the one that has kept TV viewers on edge for months as we waited for the reveal — and that was still utterly heartbreaking. So when the Season 7 premiere flashed back to Negan choosing Abraham in his deadly game of eenie meanie, I thought it meant we would be mourning him this week, and go back to worrying about everyone else in the season's second episode. Instead, we immediately were put back on edge when Daryl broke Negan's rules and launched himself at the villain, which caused him to select another victim.

I couldn't have been the only person who immediately feared for Daryl's life after he attacked, but ultimately, he was spared because Negan had another plan for him. Instead, to punish the group for his act of self-defense, Negan slammed Lucille into Glenn's head, leaving him one final moment to slur, "Maggie, I'll find you," through his gruesome injuries before being murdered with another blow to the head.

Even though many fans were expecting Negan to kill Glenn since that's what happens in the comics, this came as a shock. Abraham's death lulled us into a false sense of security — we thought we'd finally gotten the answer to the question that has loomed since the Season 6 finale. But by adding Glenn's death on top of that, The Walking Dead is making a clear statement: nothing is off limits.

The show isn't afraid to combine direct adaptations of comic storylines with original plots, or to kill off multiple beloved characters at once. It could have stopped at Abraham, it could have only killed Glenn, or it could have offed a character fans are less attached to, such as Aaron, who didn't join the series until Season 5 and plays a much less central role. Instead, it added to Negan's body count by killing two fan favorites in the span of a few minutes, and followed that up with Rick being completely torn apart and losing every ounce of power he once possessed.

For months, Season 7 has been touted as one that will change everything for the series and its characters, and extending Negan's first attack proved that. Not only can The Walking Dead go anywhere from here, but apparently, it's more than willing to go there.

More like this
Will Shoresy Get A Season 2? What To Know
By Kadin Burnett
20 Photos From The 'Stranger Things' Season 4 Premiere To Make You Feel Old
By Alyssa Lapid
Everything To Know About A Possible Season 3 Of 'The Flight Attendant'
By Gretchen Smail
Everything To Know About 'Grey's Anatomy' Season 19
By Brad Witter
Get Even More From Bustle — Sign Up For The Newsletter