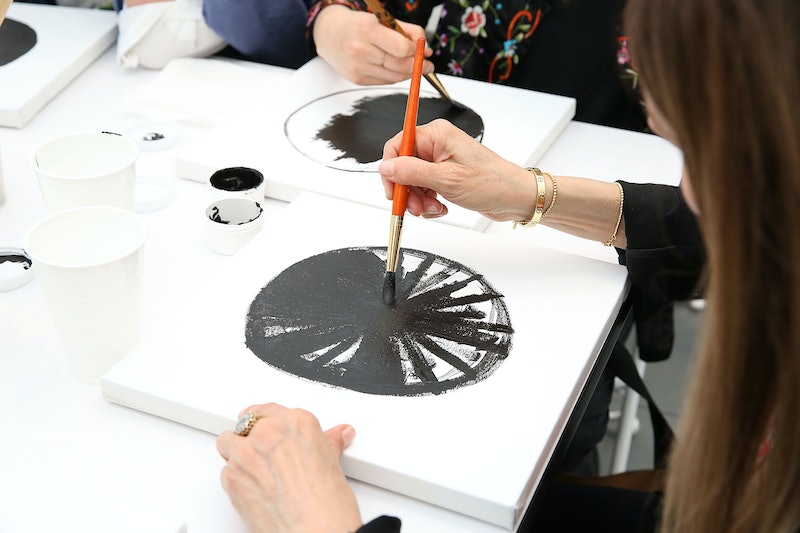 When you woke up this morning, did you feel a slight tingling in your hands urging you to pick up a paintbrush, camera or piece of clay? Hardly surprising: it's International Artist Day 2016, where the world celebrates artistic creations from around the world. And in an artistic landscape where it's often a significant disadvantage to be non-American, young, and female, today Bustle is giving you a look at some of the creative movers and shakers outside the US who are really giving the art world a run for its money. From prize-winners to hype-makers, these women are among the vanguard of new art from Europe, Asia and South America, and they're likely to be the names on peoples' lips as their careers develop and expand.

It can be exceptionally tough to create art as a woman, especially if you're aiming to make a career of it: as I've discussed before, despite the fact that women earn the same amount of MFAs as men across the US, they account for only a quarter of solo art shows in New York and even fewer of the art director positions available across America. The story is improving, with a spate of female-only art shows across the US, but breaking into the art market can be a fight against implicit sexism. (If you want a depressing read, have a look at the perspectives on art world sexism gathered by artnet from curators, artists, gallery owners and other art insiders in 2014.) With all that in mind, it's extra important to be aware of artists who may be fighting against this sexism in their careers. Read on and learn about these five female artists — it's your ticket to looking very smug when they become international industry favorites over the next few decades. Oh, and they produce amazing work, too. Bonus.

Taniguchi is going places. Born in 1981 in the Philippines, she really made her splash in 2015, when she was awarded the Hugo Boss Asia Art Award; the chair of the jury noted, "Her very singular, humble, but extremely focused practice of painting and video enriched the realm of media and raised a unique sensitivity of making the picture with infinite possibilities of meaning." Taniguchi's most famous bit of work thus far is her "brick" series, where she paints brick-like grid patterns across vast surfaces the height of a room, but she's worked with everything from pottery to video. Artsy, commenting on her work, says that "a repetitive mark-making process" is a big part of her work. This is the artist to mention to people who really "get into" modern art.

To learn more about Taniguchi, look at her website.

Gianquinto is part of Photo Boite's 2016 exhibition "30 Under 30 Women Photographers," a collection of intriguing new photography from around the world; and while many of the women on the list are involved in documentary or journalistic photography, Venice-born Gianquinto offers a more dreamlike, nature-based artistic practice. She has a BA in Photography from Milan's Italian Institute of Photography, and has done several photo series; the one that's drawn particular praise is "Hiver (Winter)," which focuses on nature and the sea (fittingly for somebody from a water-bound city).

Earlier this year, she was a featured artist on Salonistes, a creative community, and she told Positive Magazine in 2014 that "Every shot I take represents a moment which lends itself to the story of my mind, an esoteric and symbolic path that enables me to sneak in my perception. I do not take pictures in order to create, I do photography to communicate, to release myself."

To learn more about Gianquinto, look at her website.

Ever been creeped out by digitally manipulated images? British artist Kate Cooper's work is going to be right in your wheelhouse. She's featured everywhere from artnet's "50 Exciting Artists In Europe" to The Guardian, which profiled her art collaborative organization Auto Italia South East as a kind of new model for art production beyond the old "single starving artist in a garret" stereotype. The major work for which she's known is an eerie series called "Rigged," in which a set of images of beautiful women look just real enough, but not quite. In an "Up And Coming" profile for Artsy in 2015, she said that she asked herself, "What possibilities for new relationships to images and new forms of agency can we invent and produce? Who owns these images and who is given permission to use them—also, how are they related to ideas of class and gender?” Advertising, digital manipulation, gender and women's relationships with their bodies all come to a head in her work.

Xin Shen, a China-born artist, made perhaps her biggest splash in Europe in 2015, when she invited prominent tastemakers, artists and critics to a symposium in London and proceeded to transform them as they talked into "avatars" — animated creatures from the Chinese mythical text "Classic Of Mountains And Seas." It was called "Shoulders Of Giants," and it was both unsettling and hilarious. She's also done films on her father (also an artist), a Dutch couple's visit to a Buddhist temple, and Chinese billionaires in London. Her next work is actually coming up soon: on November 17, in Salford, UK, she'll stage "Originally Inclusive," turning three storytellers into "hand-drawn abstract animations" as they deliver short speeches on identity.

To learn more about Xin, check out her website.

If you knew anybody who went to the annual art fair Frieze New York in 2015, they may well have come away with one of Camil's creations. The Mexican-born and based artist gave away 800 ponchos — all made from factory cut-offs and discards, for free — causing a minor frenzy and creating serious media interest. Camil told artnews at the time, “Some of my work has to do with byproducts of consumer culture—I did a big series on abandoned billboards—and this is kind of a more personal take on that idea, and the fact that they can be recycled and worn.” Camil's work often involves artisanal techniques and reflects on consumerism: a current exhibit on show at the New Museum is called "A Pot For A Latch," and is essentially a giant hanging shop filled with her treasures, where she encouraged museum visitors to take objects and exchange their own precious objects on the hooks. The exhibition has, in the words of Artspace, "infiltrated Instagram," but Camil, who has degrees from the Rhode Island School of Design and the Slade School of Fine Art, isn't just about installations: she's also made paintings, billboards, and hung giant reams of fabric across exhibition spaces. Her viral success means Camil's probably going to be the name on everybody's lips.

To learn more about Camil, check out her website.

More like this
How To Fight For Reproductive Rights, Based On How Much Time You Have
By Courtney Young
How To Protect Your Digital Privacy If You Need An Abortion Post-Roe
By Kaitlyn Wylde
How to Delete (or Pause) Your Hinge Account
By Emma Carey
What Is A “Softboy?” The TikTok Term & Aesthetic, Explained
By Courtney Young
Get Even More From Bustle — Sign Up For The Newsletter